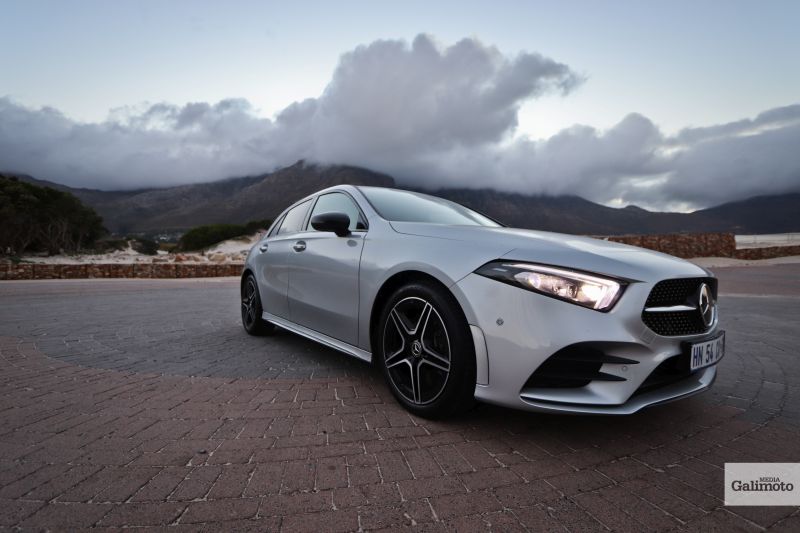 A few weeks ago I tested an A200 AMG Line and was pleasantly surprised by its youthful charms. Now it’s the turn of its bigger brother A250 with more power but fewer toys…

You need to know: The modern Mercedes salesperson deserves your admiration and pity in equal measure for their unbelievably intricate product line-up. This sharper, cleverer new A-Class comes with petrol or diesel power in “Style” or AMG (cosmetic only) trim. It’s starting to grow on me because it seems less desperately designed than its predecessor.

Where the A200 has a 1.3L 120kW turbo-petrol engine, this A250 uses a two-litre 165kW motor for anyone with a penchant for chasing GTi’s. The seven-speed auto-gearbox is jerky at low speeds but uses the considerably better torque (up to 350Nm) for good all-round drivability and the obvious upswing in performance…

More info: Our best 0-100km/h time was 6.85 seconds; Mercedes claims 6.2. Stand on the brakes at 100km/h and it stops in just 2.7 seconds and 37.4 metres. The steering is very responsive while the ride is commendably balanced – firm in “Sport” but lenient in “Comfort” mode. Chunky sides and low skirts mean it hardly feels cross-winds.

Put your foot down too often or spend some time in undulating areas and (on average) it’ll chow almost 10L/100km from the 42L fuel tank. Mercedes’ claim of 6.5 is only possibly at a steady highway cruise where top gear ensures that the engine revs stay at or below 2,000rpm; with plenty of potential for kick-down overtaking.

What else? This silver A250 did exactly what I expected – amuse us with its gadgets, attract positive attention from the public and shock traditional Merc owners; or anyone who asked about its price. Are you ready? It costs 600 grand. Without options. That means you can pilot an A-Class for the price of a second-hand S-Class and it won’t even have all the bells and whistles.

Watch out for: Unlike the A200 press car we tested a few weeks ago, this dearer A-Class didn’t have the full digital instruments, Burmester speakers or a sunroof. Spend some time on the Mercedes-Benz configurator and you’ll find an alarming occurrence of the word “optional”.

The biggest culprit is any sort of rear park assistant, like a camera, which should be mandatory in new cars with their big bums and ridiculously high window line. Luckily it has good parking sensors which were sensibly set onto the corners of this car although that meant they would beep at steep driveways. The front seats look amazing but impede rear space.

Why you want one: It looks great, turns on a dime, goes well and cruises quietly, has a decent boot and much improved cabin with all those trendy new infotainment features. The voice-controlled MBUX interface and overloaded twin-touch area steering wheel are semi-useful, perfect to show off to friends but rather expensive with a steep learning curve for anyone over 30.

Come to think of it, that perfectly sums up the A250 AMG-Line.