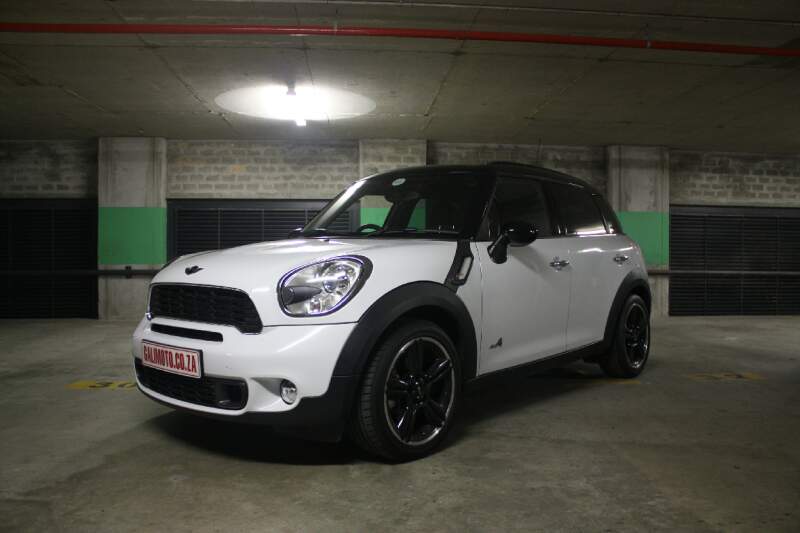 This week’s test car pulled off the perfect reversal of fortunes when it was as surprisingly good as last week’s test car was disappointingly bad. Even before taking delivery, I wanted to hate the Mini Countryman ALL4 Cooper S, but the cheeky little rascal had other plans.

It’s been almost five years since I tested my first Mini – a 2006 Cooper S. The car in question instantly lived up to its hype of go-kart handling and seat-of-your-pants performance. It was nippy, fun, cramped, expensive and (even in gun metal grey) a little bit girly.

The four-door soft-roader Countryman aims to improve any niggles by being an automotive multi-task. Rear passenger room, boot space and overall versatility is on a completely different planet from the first new Mini & Co., while self-engaging four-wheel traction helps you traverse a wee bit of rough scenery.

Despite being pumped up to previously unknown levels of usefulness, the Countryman still retains the naughty posture and shape of a proper Mini. The proportions are good and, in white, the black roof and wheels make it look like a cartoon version of an American police cruiser.

Inside, current Mini owners may briefly think they’ve entered a cathedral. Lateral room isn’t a vast improvement but the more sizable cabin, higher driving position and big, bulging bonnet give the car some much welcomed airiness and road presence.

It also cranks up the fashionable dial, as was immediately demonstrated by my closest acquaintances. After a half-hearted greeting they were in, on and under my test car like a pack of drunken first-years. The difference to their first Mini encounter was that all of them came away amazed and happy.

All the criticism about cheap plastics, disastrous rear space and a sub-standard sound system were long forgotten; replaced by praise for the body-hugging seats, good materials and quirky switchgear. The comprehensive specifications are also worth a mention.

Power steering, windows, mirrors and double glass roof (N$10,200 option) – most of which are operated by deliciously retro toggle switches. The multi-function steering wheel is small and highly responsive, as are the aluminium pedals and the six-speed manual gear lever.

The giant speedo houses an infotainment display (N$3,750) which allows you to fiddle with Bluetooth phone connectivity (N$1,700), Aux/ipod socket or single slot CD, RDS radio, vehicle info and settings, all controlled by intuitive and BMW’esque knobs and buttons between the front seats.

This vehicle also featured “MINI Connected” (N$3,250) which uses a free iphone application for online services like news, music, Twitter and Facebook. It also tracks your driving style, fuel level and features something called Mission Control. Welcome to the future.

Your speed is duplicated in a digital display of the steering column mounted rev counter, which saves you from locating a tiny needle on the rim of that porthole-sized speedo. The tachometer also houses a basic board computer.

The remaining controls are scattered wildly around the cabin but nobody seemed to care. Insert the round Mini key into its slot, press the start button and it calls upon a 1.6L turbo-charged petrol four-cylinder with an astonishing 135kW (184hp) or 240Nm.

This multi-brand power plant is an absolute peach in Cooper S trim, reaching 100km/h in 7.6 seconds (we clocked 8 flat) and a top speed of 210km/h. Its claimed average consumption is 7.3L/100km with average CO2 emissions pinned at 171g/km.

Extra cargo and/or passengers put a damper on things, but one or no passengers will showcase the lively and eager nature of this incredible motor. It starts pulling below 1,500rpm and revs cleanly to 6,500rpm, it’s your choice – brawny, low-rev torque or screaming turbo nutcase.

The gearbox is slightly notchy but adds to the Countryman’s pure and direct controls. Suspension comfort levels are quite low (especially at the bouncy back) because the emphasis here is on incredibly direct, super agile grip in almost any condition. The Countryman Cooper S is an absolute hoot to drive.

Should you overcook things, there are excellent ABS/EBD brakes with Cornering Brake Control, stability control with hill-hold, traction control and six airbags. It also had Xenon headlights (N$7,000) and Runflat tyres.

So the driving experience, specs and options are incredible. Most admirers agreed that the Countryman could even be bought by a single dude or family man, and everybody was eager to learn the car’s price. Are you ready? A 2011 Mini Countryman ALL4 Cooper S will cost you N$393,000.

This matters not; it’s a fashion accessory and these tend to sell regardless of the price. I’d ignore the feeble 4×4 system and pick a regular Countryman S at N$345,000. A cheaper and weaker version costs N$287,500 and all models can be had in automatic, too. A 3-year/75,000km motorplan is standard.