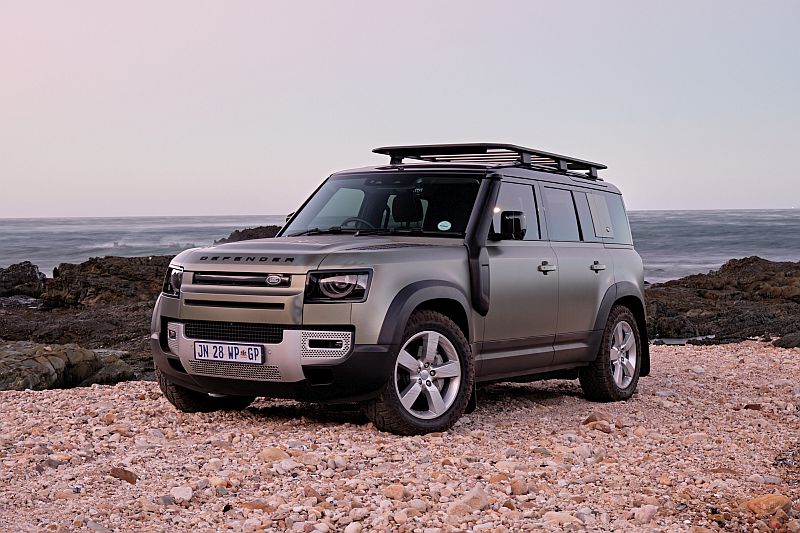 As a previous owner and current aficionado of the old Land Rover Defender, I’m going to attempt something daring and hopefully unique: a full review of this new one without mentioning the old dear…

Like the Evoque and Discovery Mark III before it, the new Land Rover Defender wasn’t just one of the most hotly anticipated models by this British brand, it set almost our entire automotive world alight with expectation. Come to think of it, the original Discovery and Range Rover also did that back in their respective eras…

This proves that Land Rover may seem stubborn or reactionary in their development but every couple of decades, they release a complete novelty. In my opinion, this new Defender certainly continues that tradition. One of the main reasons for this is the vehicle’s bold, boxy, other-worldly design. Typical Land Rover.

Those front lights immediately captured my attention with their incomplete circles, the vehicle flanks and profile are a symphony of minimalist design, while the brutish grill and bumper aren’t as aggressive close-up. D’you know what is a bit overwhelming in real life? The new Defender’s size. This is a beeeg car.

If you haven’t experienced one up-close yet, you’ll see what I mean. I thought that this new Landy would be the size of a Fortuner; maybe a Prado? But our beautiful metallic green press demonstrator felt more like a 200-series Land Cruiser; inside and out. The Defender’s dimensions confirm this: 5,018mm length, 1,967mm height and about 2m width.

With such generous measurements, the car feels absolutely massive inside. Like, truly enormous. Obviously the pilot of such a battle cruiser could get stressed quite quickly but the Rover counters that with very light controls, a highly responsive drive-train and more parking assistants than a Pretoria mall on a Saturday morning.

Honestly, I was ready to pounce on the car’s heft and unwieldy dimensions but in the few days that I commanded this tank, it never gave me parking or manoeuvring worries. I hasten to add that any driver will have to employ a fair chunk of common sense… this beast won’t fit into every bay or multi-storey exit.

Another disclaimer I have to make is that our chic-looking test vehicle was fitted with one of the biggest and most brawny power units of the range: a straight-six turbo-petrol assaulting its 8-speed automatic gearbox with up to 294kW (400hp) or 550Nm. 0-100 is claimed in 6.1 seconds and our best attempt yielded exactly 6.97.

Reversing the process as quickly as possible took 3.56 seconds and 46.31m, a testament to the car’s substantial weight and bulk. Those deficits also appear in its average consumption which Land Rover alleges to be 9.9L/100km. And although we saw 12+ a lot, the level of performance is jolly exciting for a luxury 4×4.

Please note that I typed 4×4 and not SUV because this Landy has a supremely intelligent (and adaptive) off-roading system which pairs up with multiple locking differentials, a low-range transfer case and competent air suspension setup to offer the ultimate in modern, clever bundu bashing.

I challenged it with some steep forest tracks, wet grass banks and BMX dirt jumps but this Landy just ploughed onwards. Its tyres will probably be the biggest stumbling block of serious off-roading intentions and I hope, nay, I pray that every owner at least gets their selling dealer to show them what this amazing machine is actually capable of.

To quickly touch on the interior, its design is equally interesting and as unique as the outside. Sure, some elements hark back to umm, other vehicles, but there’s a wonderful sense of cohesion and ergonomic flow in the cockpit. The gauge cluster was fully digital on our test car and is mirrored by a similarly crisp infotainment screen.

The Jaguar / Land Rover command centre has been further enhanced with modern features and is a tad more responsive than in other JLR products. I also liked its reasonable size; other manufacturers favour size over quality. Most buttons, switches and menus demand a lot of exploration as there are a lot of different (and customisable) options in this vehicle.

Seating comfort was good, maybe slightly on the hard side, but there’s an obvious abundance of head-, shoulder-, knee- and toe-room for most passengers. The ones in the very far (third) row will find that their pews are for occasional use only, although the space comes with most modern accoutrements like cup holders and charging points.

Boot space is also impressive at 857L and this is where you’ll find my favourite Defender features. Tick the right boxes while ordering yours and you could drive away with an on-board vacuum cleaner, fitted storage system, mini shower facilities and/or air compressor (for de- or re-inflating tyres and such like).

And don’t think that those will impress anyone because – trust me on this – the car itself will already do that. Every neighbour, friend, family member or passer-by wanted to see more of this new Defender and most of them came away highly impressed. I was one of them until one thing came into focus…

Add all of my experiences together and you have the makings of the ultimate modern 4×4. But my mother dearest grew up with Land Rovers on the farm and immediately proclaimed “I think I’d like to buy one! How much is it?” When I told her that this one was a cool 1.6 million, she replied “I think I don’t want to buy one…”