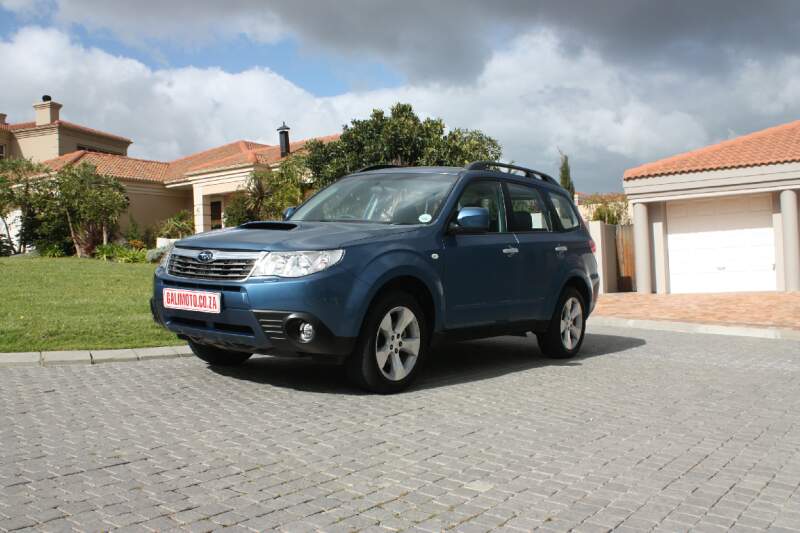 “Do you fancy testing a Subaru?” asks our senior journalist at the weekly meeting. Be honest now, what would you have answered? I thought so; and minutes later I was strapped in behind the steering wheel of the latest Subaru Forester, a 2.5 XT model.

Maybe it wasn’t the lunatic Impreza WRX, but I always liked its sister four-by-four. On top of that, my test vehicle was the correct colour for a Subaru: metallic blue.

The Forester has always appealed to me. Previous models reminded me more of a station wagon with extra ground clearance, and the newest edition looks even better with good proportions shining through its exterior design. Big windscreens and windows fit the modern-looking body with big wheel and chunky wheel arches, a shiny grill, roof racks, and an attractive backside.

The front bumper looks decidedly stubby, but that gives the SUV more capability when the tarmac ends and you’re suddenly confronted with a hill or mountain in your path. Inspired by its name I took the Forester to a wooded area and let it run amok between the trees. No problems for the Subaru and its symmetrical all-wheel-drive system or 2.5 liter Boxer four-cylinder engine.

The Subaru Forester is available in five derivatives: X, XS, XS Premium, XT, en XT Premium. All models utilise said Boxer motor, but the last two (XT and XT Premium) slap a turbocharger on for good measure. The 2.5 horizontally-opposed four-cylinder churns out 126kW (171hp) or 229Nm, and the turbo enhances these figures to a healthy 169kW (230hp) and 320Nm.

Among the various packages you’ll find four 5-speed manual versions and four models with a 4-speed autobox. Our XT tester was thus the 230 horsies, 7.1 seconds to hundred, 210km/h manual version. And I’m delighted to report that it feels like much more than that!

The XT (turbo) Forester is one of those cars that feel much more powerful than they look on paper, and this is surely the fault of the Boxer engine’s power delivery. It’s quite breathtaking! Once the turbo starts adding boost to the equation, the power (and torque) feels superior to what you’ll find in the Forester brochure. Its zero-to-hundred time also catches most passengers by surprise, much like noisy red hatchbacks at the traffic lights.

Its behaviour on long distances is equally impressive and you need not change gears to quickly pick up speed. Put foot and the 320Nm feel more like 500Nm as the Forester gets hasty and starts hurtling towards the horizon. Now I understand the concept behind Subaru’s Boxer power plants, especially if they are force-fed by a turbo.

These types of engines also lend a lower centre of gravity to a vehicle, and those unmistable tjoef-tjoef noises that are the hallmark of horizontally-opposed cylinders. The previous attribute is quite welcome in the Forester as it turned out to be bigger and heavier than I expected. If you drive like a teenager, the body will gladly lean away from your chosen direction.

This road holding is partly due to its reasonably soft-sprung (and comfortable) suspension, but with 17-inch wheels, 225/55 rubber, EBD and ABS brakes, as well as traction and stability controls, the Forester will do its utmost to control your antisocial style of driving. Another advantage of its weight and suspension setup is that the Forester (especially at higher speeds) feels safe and comfy.

Out here its fuel consumption will also improve to give you an average of 10.5 L/100km; around town the Forester is a little more thirsty… But its turbocharger and torque give the Forester owner the opportunity to motor around at low revs (and consumption) through its five forward gears.

The gearbox isn’t the most obliging of equipment (especially reverse) but the pedals and steering wheel are easy and light to operate. I couldn’t always make friends with the clutch and its electronic helpers, but that just gave me a feeble excuse to pull away at the lights like a bat out of hell.

Indeed; the Forester XT’s performance is something for enthusiasts, but the rest of this Subaru should easily convert the remaining members of their family. Its interior has enough room for five adults (with luggage) and in XT guise you will also find the following: