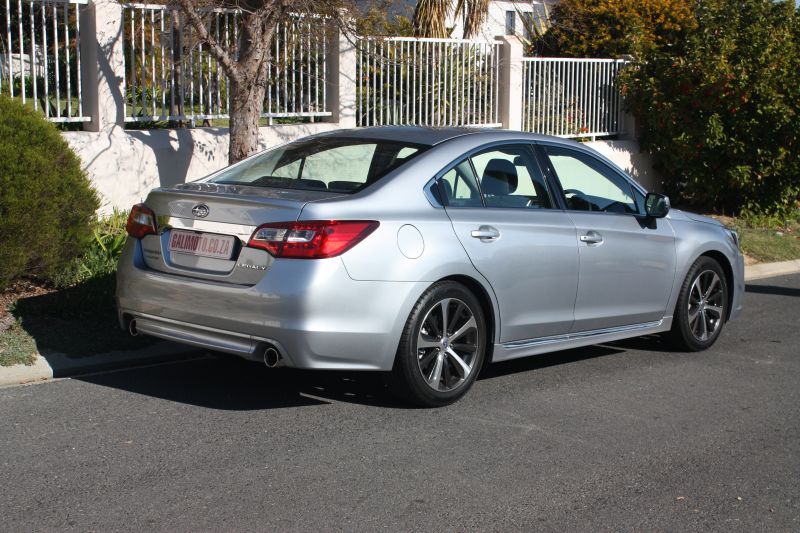 If you’re in the market for a luxury petrol sedan, you’ve probably made up your mind already. A grey Audi A4 TFSi with S-Line trim and fancy lights. Or that white C-Class which has stunning AMG wheels. And what about the silver BMW? Well, what if I told you about another contender from Subaru?

It’s called “Legacy” and you’re forgiven for thinking it it’s either a blue hatchback with gold wheels or a beige station wagon on stilts. Subaru’s biggest sedan has been around since 1989 and we even got a few of the previous (5th) generation before it was culled. Most likely because people wanted a grey Audi.

I tip my hat to Subaru Southern Africa for taking another swing at the local market with this new version, introduced internationally in 2014. Not only did I wholeheartedly approve of its forebear but a Subaru Legacy comes with some unique features when compared to zee Germans.

First and foremost is the engine. A 3,630cc Boxer (horizontally opposed) six cylinder petrol with 24 valves, 10.5:1 compression and almost square dimensions (92×91 bore & stroke) produce a leisurely but agreeable 191kW (260hp) or 350Nm. Naturally aspirated and water cooled, think of it as a budget Porsche motor.

Next up is space. The Subaru Legacy belongs to a tiny club of randomly available sedans which offer 5-Series room at 3-Series prices. Possibly even more; this car has a gigantic 506L boot. Chevrolet’s discontinued Lumina was another of this ilk and the only competitor at the moment is Honda’s new-shape Accord.

The Accord even offers a 3.5L petrol V6 model with very similar power outputs. Its price is a bit steeper than this Legacy 3.6R-S but it does have a few extra bells and whistles. Which brings me to the next advantage: that generous interior is crammed full of safety and convenience features.

These impressive toys are laid out intuitively but the only criticism I will agree with is that the cabin materials are nowhere near German standards. Wood and leather somehow look and feel fake while most plastics are of the hard variety; but that also means they’ll be hardy, i.e. last forever.

Another advantage is Subaru’s Symmetrical All-Wheel-Drive system. Armed with active torque split, not only does it inspire confidence while driving like a loon, it also gives this big sedan genuine all-weather credentials. Wet grass at the kid’s rugby day? No problem. Muddy road at a wedding reception? Whatever.

Added to that, the Legacy has 150mm ground clearance but doesn’t look like it’s on stilts. It also uses a CVT (continually variable transmission) with manual override and three driving modes – Intelligent, Sport and SportSharp. This means that a Legacy 3.6R-S has almost infinite grip and power reserves in regular driving conditions.

Subaru claims average consumption of 9.9L/100km from the 60L tank and, as with the Honda, we easily beat that with careful driving. 0-100km/h is supposed to take 7.2 seconds and our clever testing equipment spat out two results: 7.12 seconds when using the shift paddles (and simulated gears) or 6.90 in full auto mode.

A personal observation which lifts this Scooby above the Germans is its tyre size of 225/50R18 – bulky enough to deal with low-speed bumps while the front McPherson and rear double wishbone suspension take care of the rest. I was also impressed by vented brake discs all ‘round and the bonnet gas strut.

The privilege of owning a Subaru Legacy 3.6R-S will set you back exactly N$529,000 and includes a 3-year/75,000km maintenance plan and 3-year/100,000km warranty. I’ve also noticed that there isn’t anything to spend on costly optional extras. Everything is standard. Unlike some other brands I know…

As a final plus, multiple surveys and countless owners tell us that Subarus don’t really give major trouble. Much like the Accord V6, it’s devoid of turbos, intercoolers and other fancy stuff while flying the lonely flag for spacious, simple, naturally-aspirated six cylinder sedans. Grab one now before they’re gone.