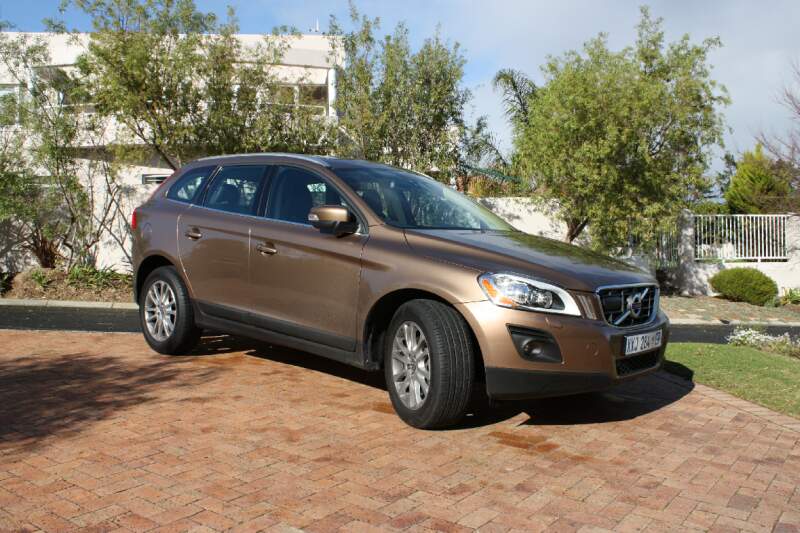 Should a dinner conversation ever turn to the subject of safe family cars it won’t take very long until the name Volvo creeps into focus. This manufacturer has a proud heritage of quality cars that combined safety with performance.

Not all Volvos can be described as exciting or modern, but the recent introduction of a few new models will surely change that perception. Just like hi-fi’s and furniture from the cold Scandinavian country each new Volvo pulls into the showrooms with an impressive collection of trendy styling and fantastic technology.

The XC60 is no exception, and showcases the new direction that this manufacturer is moving in. On top of that it’s one of the new generation of smaller SUV’s that aren’t afraid of sand or veld excursions but leave you feeling less guilty if its predominant use is town driving.

Especially with younger motoring enthusiasts the name Volvo conjures up thoughts of five-cylinder engines, also of the turbocharged disposition. Thus I had to conceal a fat smile as I was handed the keys to the XC60 3.0T and got a warning that there are six cylinders and a turbo under its bonnet.

This new recipe of building power plants is also in German books, and combines silky smooth performance with breathtaking torque and better fuel consumption; if you drive like a respectable adult. Put your foot down and the XC60 shall utilise its 210kW (286hp) and 400Nm through a 6-speed automatic gearbox to rush you past 100km/h in 7.5 seconds; and the funky speedometer needle will eventually float above 210km/h.

I didn’t test its top speed claim; purely because it’s highly illegal. And if you incessantly put foot, this XC60 will convert no less than 17 liters of 95 unleaded per 100km into highly agreeable performance and sound. The more acceptable figure of 8.5 L/100km in highway driving means that you can reckon with an average of about 12 L/100km.

The XC60’s occasional thirst on city streets may be forgiven if you consider the good performance and vast amount of torque that presses you into the alien-looking seats. The gears can also be changed by hand, but I quickly discovered that the automatic gearbox is much better at this than I am. It knows exactly when the engine’s maximum power is delivered and changes cogs in a much smoother manner if you leave it be.

This will afford you the opportunity to glance around the XC60’s interior which resembles a cocktail bar more than the inside of a motor car. Parts of the oddly shaped seats and big surfaces of the doors were covered in tremendously yellow leather, which sets a stark contrast to the remaining cabin’s black leather.

The centre console is finger-thin and floats downwards with bright matt wood and silver accents. On its way to the gear lever you will discover controls and buttons for the 6 CD/mp3 premium audio system, climate control, and at least half a dozen safety features.

This brings us to the most important part of my article, the XC60’s impressive safety equipment. Trust me, if you like Star Trek then you wouldn’t want to own any other car. Do you like radar guided cruise control? Press a few buttons on the steering wheel while commuting into town and the Volvo adjusts your speed to the car in front of you. You can adjust the distance too, but even the shortest setting leaves plenty of room for a GTi, a double-cab bakkie from Paarl, and two minibus taxis.

Even if you don’t use the cruise control, the XC60 will illuminate red lights in the windscreen to warn you about the insufficient distance to traffic ahead. It will start flashing said lights and start beeping if things get a bit too close, but thankfully the system can also be deactivated. A daily trip in Windhoek would be a journey of lights and alarms!

Then there’s the latest and greatest system, dubbed City Safety. It also uses the XC60’s radar and will apply the brakes automatically if it recognises a potential impact under 30km/h. Much like the top speed I opted not to test this, mainly because I don’t have N$515 000 in my pocket.

Our senior journalist did have an opportunity to sample this system on the XC60’s launch, and excitedly tells how the vehicle actually spotted a stationary (foam) car and threw ankers. The XC60 can also warn you if there’s something in your blind spot, and beeps at you if you stray over the white or yellow lines without using an indicator.

Surely I don’t need to tell you that the “normal” equipment like ABS brakes, traction control, airbags, (excellent) active Xenon headlights, central locking (with intelligent key) and tons more equipment comes as standard? This easily makes the Volvo XC60 one of the most impressive vehicles I’ve tested recently.