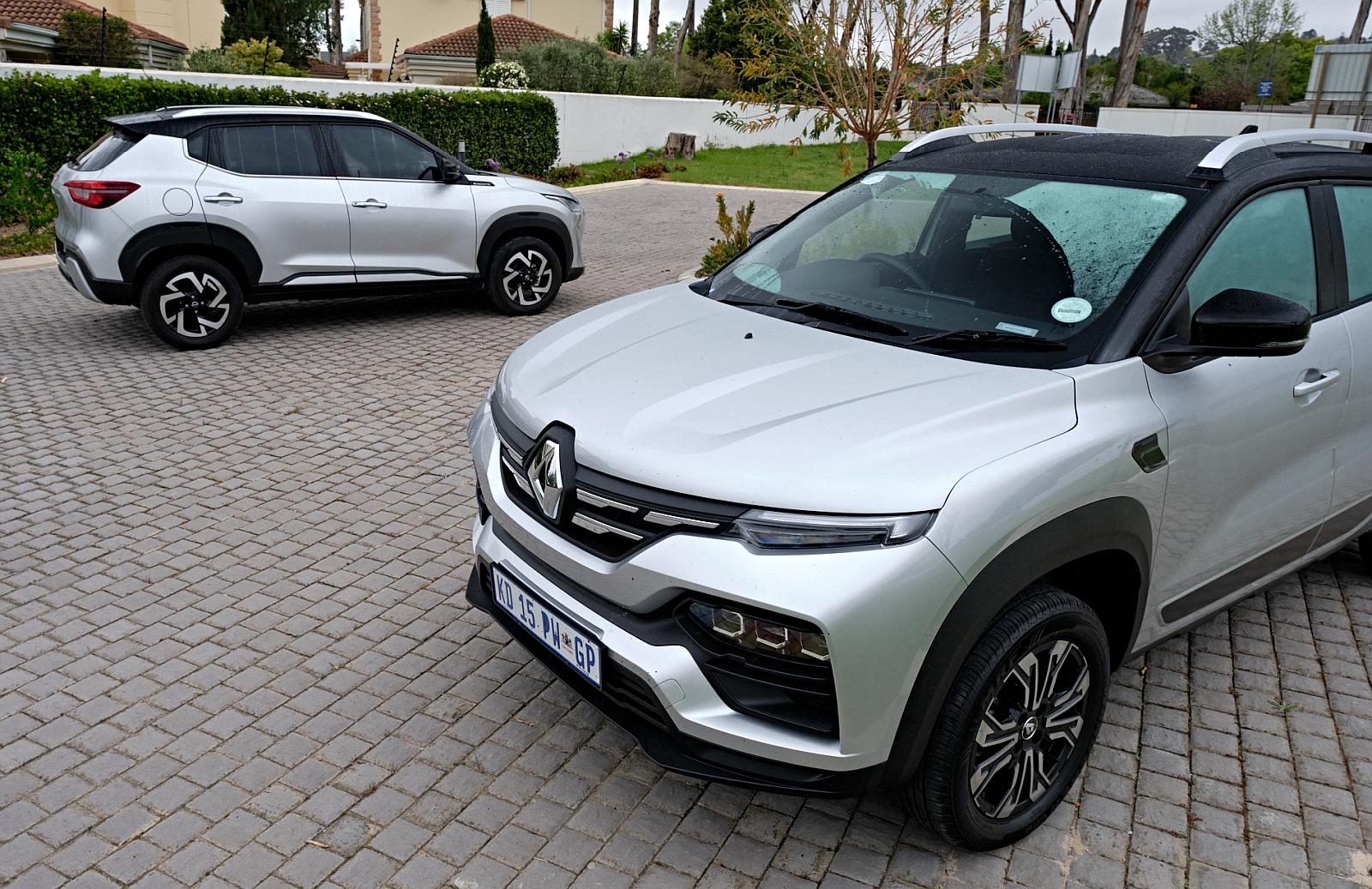 One shared platform, two different cars: the Magnite and Kiger are practically siblings but their characters are like chalk and cheese. Read on to find out which one’s a powdery mess while the other one is a creamy delight…

Having accidentally but fortuitously received a silver manual press vehicle of each model, we weren’t going to let this comparative opportunity go to waste. At first I thought that one is based on the other, but a wee bit of research shows that they are separate models built on the same “Renault-Nissan CMF-A+” platform. Sounds kinky.

With recent badge engineering like Vitara Brezza and Urban Cruiser, or Baleno and Starlet, I hope you’ll forgive me for thinking that one of these brands fell into the same trap. Upon closer inspection of the bodies, it turns out that every panel of these two compact SUV’s is different; especially the important ones like A or C-pillar, bonnet (hood) or trunk lid.

That means they have slightly different window lines, and marginally deviating exterior dimensions. We’re talking millimetres here. I’ll let everybody form their own views but in my humble opinion, the Kiger is the better looking of the two. It has more flair, deeper light clusters, and a somehow more coherent exterior design.

I’ll get to the interiors in a minute…

Now, seeing that they share the same underpinnings, Magnite and Kiger have identical wheel bases and wheel sizes, suspensions and ride height, engines and gearboxes. For the record, either car is powered by a 999cc in-line 3-cylinder turbo-petrol engine delivering up to 74kW at 5,000rpm or 160Nm around 3,500rpm to the front wheels.

For the record, both manufacturers offer escalating trim levels and the option of a CVT automatic model. Our two test mules pictured here were the top-spec manual derivatives: Magnite 1.0 Turbo Acenta Plus and Kiger 1.0 Turbo Intens. I presume that Renault left out the letter “e” for weight saving purposes?

Or because they’re French.

However, the Nissan claws some points back when it comes to specs because it has traction control and brake assist over and above the baseline stability control of both vehicles. Kiger Acenta Plus pilots can also boast with a surround-type camera, part-pleather trim, cruise control and tyre pressure sensors.

In both vehicles, its normal position is one mark away from boiling! Other oddities in the cabins include a hectic un/lock mechanism, two glove boxes in the Renault (versus one in the Nissan), additional cabin lighting button in the Kiger, as well as a distinctive three-way drive mode selector for the Renault.

This device not only changes the drive train response, it also alters the instrument cluster’s appearance; with brief transition periods where the main needle disappears. And now, in case you were wondering if this will ever turn into a one-horse race, is where things start to go absolutely and catastrophically wrong for the Renault Kiger.

In no particular order, my gripes include the Kiger’s top two steering wheel stitching seams; which are made of razor wire and shards of glass. It has no cup holders, unless you want to try the 45-degree angle door pockets or a central tunnel cavity whose unbelievable enormity is only dwarfed by its sheer uselessness.

You can fit wallets, handbags, laptops, small children and pets in there but be warned – they will all slide around and scrape along the cheap scratchy bottom of this riotous receptacle. The Nissan Magnite has two normal cup holders and a much smaller oddment binnacle with a softly padded armrest.

To be fair, the Kiger has one of those, too.

Both cars have another storage binnacle in front of the gear lever but while the Magnite’s one is rubber-lined with a horizontal 12V port, the Kiger’s one offers more scratchy plastic with a vertical cigar lighter socket… perfect for your freshly spilled coffee to fly into. Above that, things get even worse for the Renault.

Nissan dedicated a slim plateau to wireless mobile phone charging, finished off in a sensible grippy rubber trim. Renault? Oh no, they left out the charging goodies and used more of that hard and scratchy stuff. The result is that something as mundane as your house keys (or coffee) can become a horrific distraction in the Kiger.

And when you’ve finished your journey – although this applies to most contemporary Renaults – the Kiger has a special torture in store for you. Especially those who like to arrive silently (or need to carry sleeping children to bed) will not appreciate the Renault’s insistence of locking itself – and loudly hooting twice – while you walk around the car.

If I have to nit-pick, the Magnite’s headlights and main beam / brights are slightly better, I prefer the design of its alloy wheels plus it delivered slightly better acceleration and brake times. In all fairness, both budget Indian tyre brands fitted here performed admirably, while the Kiger’s power deficit can be attributed to this vehicle’s very low mileage.

Both cars have the typically rough 3-cylinder nature and an equally typical messy power delivery. Their makers have done well to induce low-down urge into these engines but that surge through the mid-range isn’t very smooth. Their urgency seriously decreases near the red-line, and I found that both cars can venture far into this danger zone before being told off.

So. In theory, these two should be identical… but in practise, they are anything but that. I found the Kiger almost impossible to live with, and the only upsides were the slightly better warranty, extra glove box, extra air bags, extra mood lighting and well-defined Eco / Normal / Sport driving modes.

But if you want a good compact SUV, a small FWD car that won’t spill your chai latte or hoot your babies awake… for the love of all that’s holy, take the Nissan Magnite!