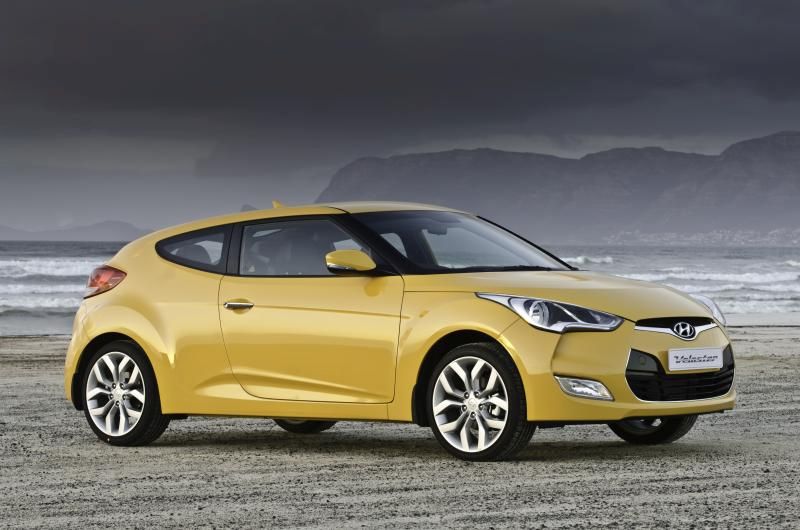 As we’ve recently discovered, Hyundai is steadily moving on up. Their idea of a deluxe apartment in the sky now excludes bargain cars and embraces quality, style and value. The next step is to add some excitement to their brand which is where the new Veloster reports for duty.

You may be disappointed to learn that it doesn’t have a V12 engine or scissor doors, carbon fiber or a turbo charger. Yet. In proper Hyundai tradition the Veloster uses trusted technology hidden beneath rather daring and dashing shapes – which aren’t even symmetrical.

Was this an engineering slip-up? Did a designer misread the instructions? Both are improbable as Hyundai wanted to bring something refreshingly different to their showrooms. They certainly succeeded – the Veloster has one door on the driver’s side and two doors on the other.

That’s right, the rear passengers can only get in on the left and those two left doors are smaller than the long driver’s door. This means that the B-pillars are offset and needed some trick construction to ensure rigidity. Just take a while to think about that. Take as long as you need. I’m not going anywhere.

It may not make the most sense but as an ex-coupe owner I can vouch for most rear passengers usually entering and alighting on the pavement side. That also explains why it took the Veloster so long to get to our shores – it had to be reverse engineered for left-lane traffic.

This makes the new Hyundai something rather special and a brilliant niche product. Would you like a coupe or hatchback? What about both? I took a considerable amount of time shuffling around the Veloster to take in its looks and while they have some odd lines one has to hand it to Hyundai for pulling it off.

They didn’t stop at merging two cars into one, the rear glass hatch is split in two Honda / hybrid levels while its wide haunches have a sprinkle of Renault Megane about them. A high bonnet with two air ducts follows two distinctive lines into another iteration of Hyundai’s corporate face; which most resembles an i30.

Based on an Elantra platform, the Veloster is available with a new direct-injection 1.6 petrol four-cylinder (103kW/140hp/167Nm) and either a six-speed manual or six-speed double-clutch automatic gearbox. Specification levels are identical and the automatic car is N$17,000 dearer.

Hyundai’s first DCT ‘box wasn’t as convincing because it’s nowhere near as quick or involving as rival double-clutch auto shifters. Never mind the absence of shift paddles, many drivers noted that its tardy reactions simply felt like a conventional automatic. It is super smooth though.

Riding on 18-inch wheels as standard, it takes quite some doing to unsettle the car and wake its ESP or vehicle stability management. Other safety items include ABS brakes with EBD, active yaw control, ISOFIX anchors and six airbags for a five-star Euro NCAP crash test result.

Although lacking navigation, the sound system has a snazzy seven-inch touch-screen display mounted in the motorbike-inspired central dashboard section. The system handles radio, CD, Aux/mp3 and Bluetooth through seven speakers, an amplifier and subwoofer.