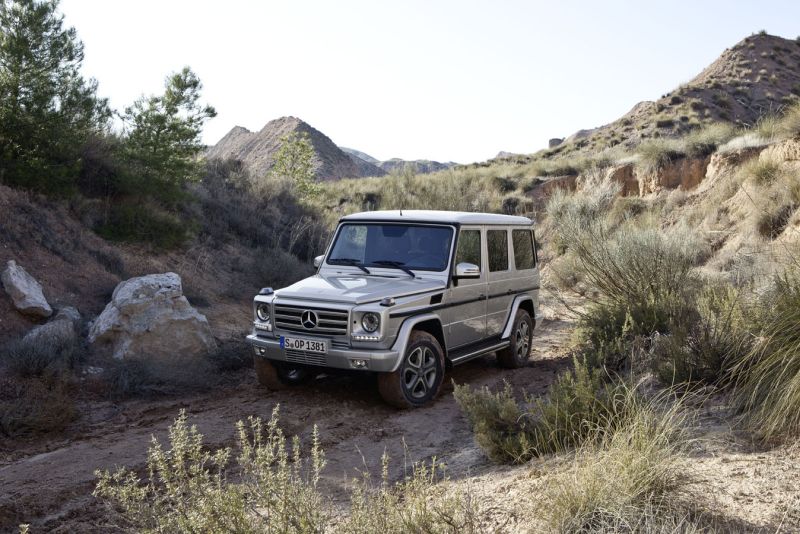 Mercedes-Benz is one of the most innovative automotive brands on the planet, never mind the oldest, so it’s rather surprising that they have a monster lurking in their pricelist. A rugged, uncompromising, almost backwards machine called (insert sounds of thunder) Der Geländewagen.

OK, so the G-Wagen isn’t really a monster and simply a pleasant spin-off from Mercedes’ military vehicles division. Developed in collaboration with Magna-Steyr, the first G-Class appeared in 1979. Mercedes already built four-wheel-drives in the twenties but the W460 was their first 4×4 offering for civilian Fritz.

Although continuously improved upon, the car’s rugged nature ensured its popularity and an uncontested first place for the longest ever Mercedes production run. With no sign of fading demand and 33 years under its belt, the G-Class even wipes the floor with Bobby Ewing’s R107 SL which managed a measly 18 years.

A few explanations for this longevity may be its ancient ladder frame chassis with eight mounting points for the square body, not forgetting its solid axles, heavy duty suspension, 60cm wading depth, low range transfer case and three diff locks – centre, front and rear for 100% traction.

This sturdy construction happens in Graz, Austria, where every Geländewagen is built by hand. The reason we only welcomed the G-Class in April last year (and now, its updated form) is that there wasn’t much demand for right-hand-drive vehicles.

When Australia ordered 1,200 military units, Mercedes-Benz immediately updated their production and RHD models started rolling off the line. South African Mercedes execs weren’t the only ones who jumped at the opportunity when a civilian right-hooker business model became viable.

Good on ya Bruce for ordering a whole heap of the stuff and thanks to MBSA for bringing the legend to town. You only need to visit Somerset West or Stellenbosch to spot an older, meticulous G-Class which someone imported at great expense.

These enthusiast keep the legend alive and are helped by Hollywood celebrities who regard the Gee (usually in AMG and/or convertible trim) as the coolest must-have on wheels. Another famous passenger is his holiness the Pope, whose Geländewagen has been dubbed the Popemobile or Papa G.

This week’s launch celebrated a host of new features to the W463 range, including a new model and engine changes. The entry-level, basic G300 Professional remains unchanged. New for the rest of the gang are better door mirrors and LED daytime running lights.

The fresher models receive a much-needed update to their interior which now falls in line with Mercedes-Benz standards. The new dashboard has a central TFT monitor and COMAND selector knob as well as new dials, switches, gear lever and multi-function steering wheel.

Crucially, this update has given the G-Class safety and comfort features which wouldn’t be out of place in a big Mercedes sedan. Highlights are park sensors, Harman Kardon speakers, ESP/ABS, tyre pressure monitors, media interface, ventilated multi-contour seats, Blind Spot Assist and COMAND with DVD.

Non-AMG derivatives can be ordered with the G63’s toys as extras and, depending on model, the options list also includes Sports and other packages, Sports exhaust (G500 only), brush guard, headlight grills, privacy glass, rear entertainment, bigger wheels and tyres.

As for engines, G350 BlueTEC retains its 155kW/540Nm turbo-Diesel V6 while the lunatic G55 AMG Kompressor was dragged away from licking windows and fitted with an even crazier 5.5L Bi-Turbo V8 (400kW/760Nm) to become the G63 AMG.

Slotting in between these two is the new G500, powered by a 285kW/530Nm V8. This 5.5L unit was fished out of Mercedes’ redundant engine skip because it can stomach sub-standard fuels *ahem* in third world countries *cough cough*.

Unfortunately, we won’t get convertible, crew cab or G65 AMG models. Local models are highly customisable though and delivery of a regular one should take about 2-3 months. Prices start at an eye-watering N$786,900 for the G300 Professional and end at a heart-stopping N$2,047,000 for a G63 AMG.

In return for your second mortgage, you do get a phenomenal 4×4. On our launch route, a convoy of Gees snaked through KZN’s sugar fields and into a rather muddy off-road playground. No problems for the extremely capable G-Class, even when fitted with AMG goodies and 20-inch low-profile tyres.

Steering and road-holding are definitely last millennium yet all G-Classes exhibit a bomb-proof ride and build. Some observers hated it, others were infatuated and most fainted at the mention of prices. One thing’s for sure though, its prices are as fearsome as its desirability and off-road abilities.