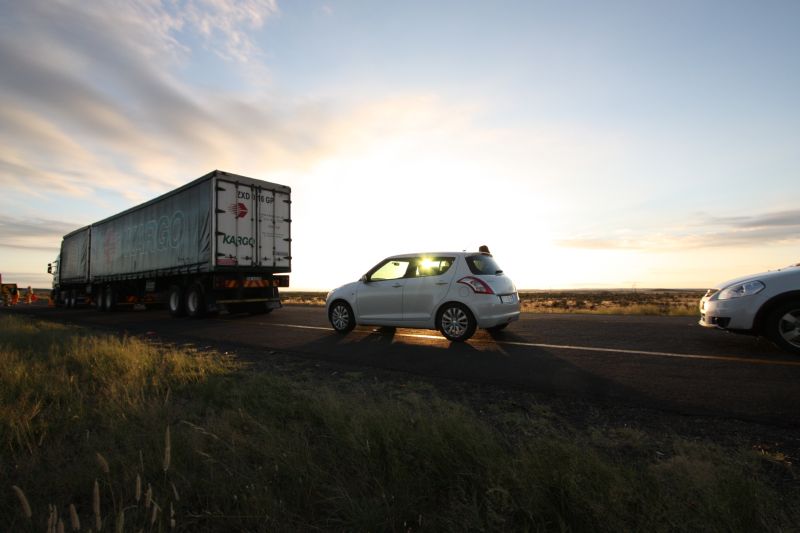 Should you not know this, motoring journalists are usually fed a stream of cars from various manufacturer press fleets. These groups of vehicles are registered to the factory and used for launches, road tests and long-term reviews, events and other automotive occasions. One such car is this white Suzuki Swift 1.4 GLS.

Quite some time later – this tends to be the work of mileage or age – every press car is returned to its headquarters for a quick once-over and, if required, a wee refresh before being moved on to the pre-owned floor of a dealership and prepared for a new owner to take it home.

I’m divulging all this inside information because most cars are returned to HQ’s which tend to be in Gauteng; thus we jumped at the opportunity to drive this Swift from Cape Town to Johannesburg. Another reason it was recalled by the mother ship is that there’s a mild spec update around the corner.

Although there were just two of us in the car, we had a considerable amount of luggage to transport north east. Travelling in convoy with another Suzuki – our lady journo’s trusty SX4 – both cars’ 60/40 split rear seats and second boot floor were utilised when we departed on a damp Saturday morning at 2AM.

Boot space in the Swift increases from 210L of city shopping to a reasonable 533L you can use on an adventurous and/or long trip. We opted to fit a Thule box to the roof racks of the SX4 but the Swift has preparation for these too – visit http://www.suzukiauto.co.za/suzuki-accessories-for-sale.aspx for more info.

Right, back to our trip. Not wanting to look at the proverbial horse’s dentures, we had our reservations about the 1.4 GLS tank size and performance but the little Suzuki proved to be nimble, frugal and spritely before we departed. “Little” is also quite apt as the 3.8m long and 1.7m wide car is a breeze in town.

Ninety five. Less than a hundred horsepower and cargo close to its maximum capacity would surely spell agonising performance, scary overtaking runs and shocking consumption? Eeenk, wrong. I’d be lying if I told you that it still had nippy response but we were seriously impressed by the Swift’s fully-laden antics.

Only steeper hills and the eventual thin Gauteng air had us shifting down to increase momentum, cruising at the speed limit was no problem at all, while overtaking just needed a little longer and was helped by the 1,400 motor’s beautifully linear power delivery right up to its 6,200rpm redline.

We hardly touched the climate control system which kept the cabin temperature just so, the sound system played radio, CD-RW and USB sources through a thumping set of speakers, dipped and main beams are great, seating comfort is excellent at the front and the ride is quite comfy too.

Our Swift 1.4 GLS had one more ace up its sleeve though in the form of phenomenal fuel consumption. Our average figure around town was spot on the manufacturer’s claim of 5.5L/100km, even dipping to 5 flat when exposed to constant speeds and delicate accelerator work.

Believe it or not, climbing up to Jo’burg with a full load saw our average figure rise to around 6L/100km which meant that we could’ve easily beaten its indicated range of 580km on a full 42L tank. And with yet another fuel price hike behind us, the 1.4 Swift’s consumption is a big selling point.

So – it’s small and nimble, very practical and well-appointed, extremely frugal and reasonably nippy around town. It struggles a little at altitude but I’d love you to be the judge of that. And if you’re quick about it, there should be a white one popping up at a dealer around Pretoria sometime soon.