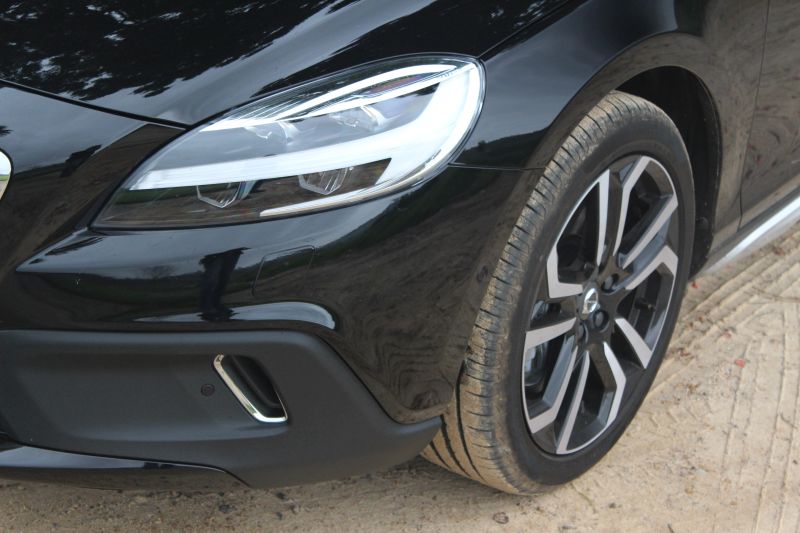 What you need to know: The Volvo V40 is a stylish and modern mixture between hatchback and estate, blessed with a talented chassis and wide array of superb engines. “Cross Country” means exactly that – it can cross parts of the country but (at least in this guise) is not a 4×4 or even all-wheel-drive.

What this car gives you is a bit of extra cladding as well as vital ground clearance for chancing a few off-road obstacles. Other than that, it’s a normal front-wheel-drive automatic Hatch-tate. Pardon, Es-back. To keep the already accomplished V40 range competitive, Volvo just gave all models a few minor tweaks.

Some more facts: These include – in no particular order – the full range of Drive-E (modular 2-litre) engines, new paint and trim options, the brand’s new signature “Thor’s Hammer” LED headlights and Polestar performance parts. The last two items are model-specific or available as optional extras.

The V40 Cross Country comes in various spec levels with turbo-diesel (110kw to 140kw) or turbo-petrol (140kW to 180kW) engines; the big petrol is shipped with intelligent all-wheel-drive. Our T4 Momentum Geartronic test car was the smaller petrol muncher (claimed 5.6L/100km) which is also available as a manual shifter.

Where we drove: On, like, roads and stuff. Most of them were sealed with tarmac but some were very gravelly and dusty. Despite its big 18-inch alloys (17’s are standard, optional up to 19) this black V40 CC still gave a comfy ride by modern standards. Rear passengers only complained over the really choppy stuff.

Watch out for: The boot size of 335L isn’t ground-breaking but can extend to 1,032L with the rear seat-backs folded. Ah, that’s better. As per usual, our average petrol consumption was nowhere near the maker’s claim and settled at a round nine. That means our maximum range was about 690km from the 62L tank.

The Volvo dashboard’s floating centre console never gets old but one tester remarked that it’s daunting for newbies and needs a refurb. I disagree. Considering that it handles everything from sound to climate, selectable driver aids to a whole horde of vehicle settings, it’s still a masterpiece of modern packaging.

Why you’ll want one: No idea, actually. I can fully understand you craving a V40 – because I do. Maybe your local dealer had no V40 stock or you fancy the butch look? Maybe you want the extra clearance because your driveway is very steep or your in-laws live at the end of a rutted farm road – because mine do.