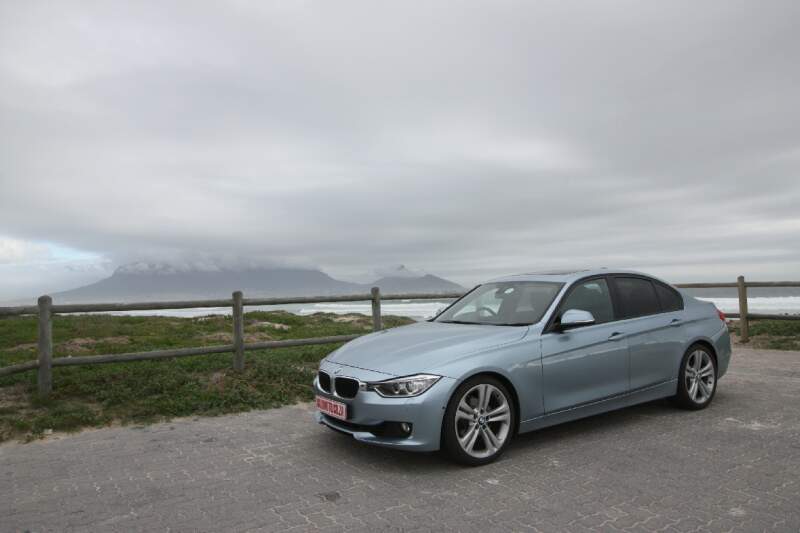 I’m a petrol head. While most people fondly remember their first kiss, first bike or first dog, I like to think back to the first car I took sideways, the first car I managed to chirp into third gear and the first car I inevitably spun. These honours belong to just one automobile… a BMW Three Series.

The vehicle in question was a late 1980’s 325i Manual and made a huge impression on a teenage boy from Windhoek with an oven-fresh license. Compared to other cars at the time, the 325 had an exciting character made up of meaty steering, a fizzy engine and an incredibly lively rear end.

I mention this because I’ve been testing its great-great-grandchild, an F30 BMW 320i. The new 3-Series was apparently launched earlier this year and made lots of people, especially those in the employ of its main rivals, shift around nervously in their chairs.

The outgoing E90 model got better with age but started its life in 2005 with instant critique of its looks, inside and out. They were modern and stylish but soft and bland when compared to its predecessors. This new car addresses the problem and addresses it well; it looks striking.

Nicking items from other Beemers, its drooping nose is pure Z4 while the hanging 1-Series eyes look great this time around, thanks to some chrome highlights which flow into the flattened BMW kidney grill. The profile retains some E90 elements yet looks more purposeful, more complete.

The back could be mistaken for a 5-Series but that isn’t exactly a bad thing. Thinking back to the old 325i, this new model’s interior shows quite a bit of heritage. The cocooned cabin, that driving position, the orange dials (which a friend disliked) and crisp driving controls.

Material quality and fit is excellent, all surfaces have a solidity to them which is mirrored by the dark thud of a closing door. Switchgear layout is intuitive and most items will be quickly learnt, including the clever i-Drive system with optional extras like Satnav and Bluetooth.

There are plenty of delicious options available, many in neat packages, but I found some glaring omissions like cruise control and folding rear seats – both optional. Our test car had over N$140,000 of goodies fitted so you best do some homework before waltzing into your nearest dealer; the choices are bewildering.

Starting at N$361,000, a 320i is powered by BMW’s new Jack of all Trades, a 2-litre turbo-petrol 4-cylinder and while it harks back to the Bavarian’s tradition of four pots, it (together with emissions legislation) spells the end of sparkling, free-revving straight sixes.

Combined with an 8-speed automatic gearbox (optional), I disliked this combination in the “2.8-litre” X1 because it was indecisive and sluggish. Although down on power, this application seemed oodles more amicable, helped by shift paddles and a four-way drive mode selector (optional).

Sometimes you catch the gearbox mid-shift and there’s still a hint of turbo-lag but the motor builds up steam from surprisingly low down. Give it spurs and the 135kW / 184hp / 270Nm will whoosh by 100km/h in 7.6 seconds (we confirmed it) until surrendering at 235km/h.

It gets even better with claimed average consumption of 5.9L/100km, helped by BMW’s Efficient Dynamics, selectable start/stop system and “Eco Pro” mode. This car’s overall average was 8.5L/100km and while hurried driving can quickly top 10, you can also achieve 4-5 with careful driving. Very impressive.

As for its handling, this particular car had a smooth ride (especially at highway speeds), cornered well but came with an annoyingly bouncy front end. Over bumps and crests, the nose would jolt and rebound a few times, sometimes even bottoming the suspension out.

When pushed harder, the wonky front end tended to nose-dive or pitch, alerting the stability control a little too soon. In Sport+ mode, the computers allowed a hint of rear sliding as well but, combined with its increasingly removed driving sensation, this is no 325i.

That doesn’t mean the new 320i (or 3-Series) is a terrible car; far from it. It’s missing a few niceties and charges too much for the rest but as a driving machine you can’t fault it. It’s very accomplished and I enjoyed this car right up to the point when I pulled up next to a box 325i and welled up with the inspiration for this review.

I appreciate and advocate the progress of new cars but sometimes I secretly wish they would go backwards again. The BMW 3-Series is one of those cars. I wish it had fewer computers and more cylinders. I wish it was less refined and more raucous. Less grip and more zip. But what do I know, I’m just a petrol head.