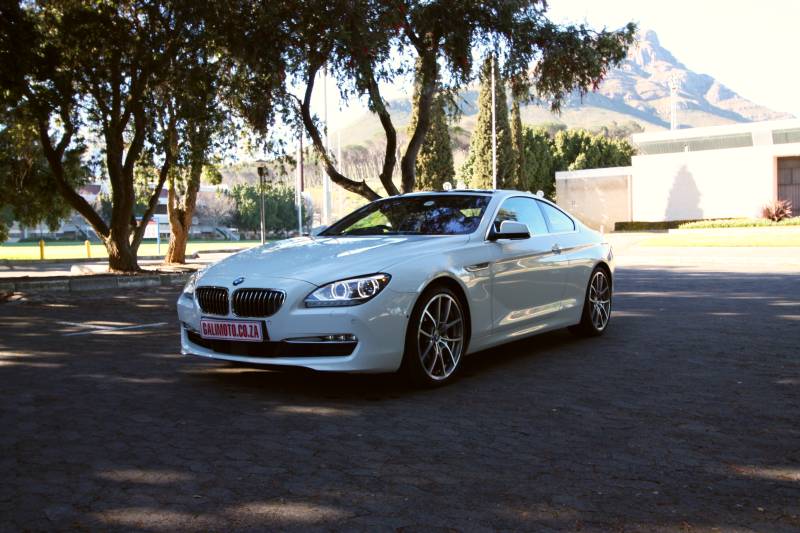 Cars come in all shapes and sizes but, more importantly, with wildly differing applications or purposes. Some are cheap, some are fast, others are rugged and a handful are fast ‘n flashy. You get few that do it all and even fewer that do it well so I’m always happy to review a car with limited applications.

In fact, I’m not just happy to review them, I’m prone to love them and occasionally buy them. The new BMW 6-Series is just such a car although it’s ever-so-severely out of my reach. All it claims to be is a sophisticated GT, a suave grand tourer to whoosh you and your significant other through the countryside in style and comfort.

That’s why I love big luxury coupés, they are engineered for (apologies, Jaguar) space, grace and pace. Plus, they float between sensible sedans and sexy sports/super cars – also price-wise. The GT is for discerning drivers who want to treat themselves to more than a luxury sedan but to less than a brash and unpractical sports car.

I wasn’t too crazy about the previous Six Series’ looks yet its new-age grace eventually grew on me. This latest generation didn’t look very promising in digital media but cuts a dashing figure in real life. I wouldn’t call it stunning; however, the car has presence, smooth lines and interesting details.

Even dull ‘n dreary white, the colour of delivery bakkies, couldn’t ruin the car’s distinctive features which blend well into the BMW design language. The bulging nose, those trick headlights, profiles with organic curves and strong creases which flow into a complicated rear end with groovy light clusters.

Open one of the long doors and you’ll immediately notice the following: the exterior hides its size well as there’s loads of room inside. The rear seats are a bit cramped because, let’s face it, this car is all about the driver and passenger who enjoy acres of space and a beautifully curved dashboard like those in BMW’s of days past.

Our test vehicle was partly trimmed with red leather (N$10,900) which made for a very tasty combination with black leather and silver inlays. Real metal and red stitching drew the same attention as crisp displays and superb finishes – even after 11,500km and countless testers, this car felt expensive and brand-new.

There are many colours and extras to choose from including the blow-your-mind Bang & Olufsen stereo for a blow-your-mind N$49,800. Everything’s automated and for the technically-challenged amongst us, the more complicated stuff (self park, surround view, lane assist, head-up display, speed limit recognition, night view, active cruise control) is optional and selectable.

Before that happens, you’ll have to start the 640d’s engine which is actually a 3-litre turbo-Diesel straight-six worth an astonishing 230kW (313hp) or a simply staggering 630Nm of maximum torque. 0-100km/h takes just 5.3 seconds (we clocked 5.6) and top speed is the usual limited 250km/h.

All this power is sent to the rear wheels via a clever 8-speed automatic gearbox with shift paddles and various drive modes. Do yourself a favour and fork out another N$34,500 for Adaptive Drive Control whose five modes change the 640d from a comfy cruiser to an edgy sprinter or sparing commuter.

With optional dubs (20-inch rims), the rubber has ridiculously low profile but somehow the computerised ride still manages spongy comfort next to rock-hard handling. There’s plenty of power to get naughty but the driver aids and grip levels were so sophisticated that I dared not push beyond what I already thought was impressive.

What this car absolutely shines at is covering vast distances at high speeds, high comfort and low stress levels. On top of that, it’s got amazing frugality, hilarious power reserves and with the N$9,600 massage seats option ticked, the ability to unsettle your passenger because it (and I quote) “touched me inappropriately!”

Back in daily traffic, “Eco Pro” mode and a standard stop/stop system can tone the car’s thirst down to the 5.4L/100km claimed by BMW. We averaged 8-9L/100km, which is quite remarkable considering the car’s weight and substantial fire power. Equally impressive is the claimed average CO2 output of just 143g/km.

The 640d costs N$889,000 but you should aim for a cool million to get the properly-spec’d, full Monty version. My impressions were mirrored by many passengers and a very excited hotel valet. The 640d isn’t overly ostentatious; it’s quietly attractive, highly sophisticated and an absolute dream to drive.