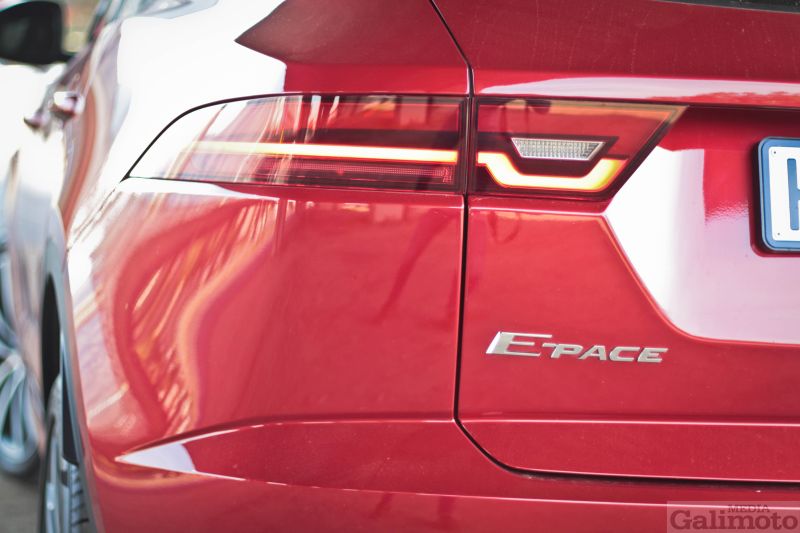 That’s it, I’ve had it. Enough! Enough already with this stupid SUV malarkey, it’s gotten completely out of control. Who would’ve ever thought that Jaguar (and Bentley, Maserati, Porsche, Lambo, etc., etc.) will get in on the action and what the hell is the meaning of E, F and I Pace?

Perhaps I should start with an apology – for being a little bit grumpy – but I assure you that it wasn’t a passing phase or temporary foul mood during my tenure with this compact British SUV. At the same time we also had a humdrum Japanese hatchback on test and I much preferred driving that over this E-Brake.

The brutal onslaught of winter may have played a small part in this as the affordable (mid-spec) runabout had two-stage front seat heaters and Jaguar thinks that anyone who dumps almost 900,000 bucks in their bank account needs to pay extra for those. The same goes for decent park sensors or a 360° camera.

These are absolute necessities because of the E-Space top-heavy dimensions with squished extremities. I will concede that it’s one of the most attractive SUV’s I’ve ever laid eyes on but that’s where my love ends. Visibility is poor, passengers complained about the stingy window line and seating room isn’t exactly cavernous.

The boot can hold a generous 580-odd litres (up to 1,230L by folding the rear seats) but other SUV’s at this price point will easily trump that. Again, I admit that’s not entirely the handsome E-Face’s fault because it’s built in Europe, hence fully-imported with our wonky Rand getting pounded by the sturdy Sterling.

Its stylish cabin is tastefully trimmed in luxurious materials with plenty of gadgets and displays to toy with. The infotainment system is well laid out but has a couple of infuriating flaws. Firstly, I couldn’t get the screen to switch off or dim and secondly, any USB disk playback randomly starts from song 1.

In a fit of rage I grabbed my GoPro and tried to film the phenomenon – which occurred every second or third time I started the E-Rage – but the system saw me coming a mile away. It worked perfectly, starting exactly where I had left off, eleven times in a row. The very next morning, it reset itself to song 1 again.

Next on my list of concerns was the car’s drive train and ride. It does have the underlying sensation of grace and smoothness you’d expect at this price but most luxury car owners would agree that the E-Place suspension and 20-inch wheels err on the side of firm. Steering’s quite good, brakes are excellent and so are the LED headlights.

Power in this D240 model comes from a 2-litre turbo-diesel four cylinder engine to the tune of 177kW or – you guessed it – around 240 horsepower. A massive 500Nm of torque is also threaded through a nine-speed automatic gearbox to the front wheels… because let’s be honest, nobody in their right mind would take an E-Case off their town’s perfectly smooth tarmac.

Thanks to excellent damping and insulation, the little tractor engine doesn’t sound too harsh and its power delivery is equally refined (for a diesel). Outright performance is impressive: Jaguar claims 0-100km/h in 7.4 seconds and a top speed of 224km/h. Our best 0-100 time was a commendable 7.49 seconds.

Unfortunately that 99-speed gearbox lets the side down because the poor thing is forever changing gears… except when it needs to. I wasn’t the only driver who noticed that it liked to coast around corners at 30km/h and then looked for non-existent torque in third or fourth gear at 900rpm.

My biggest concern arrived during performance testing because an intentional evasive manoeuvre ended in a wild concoction of under- and over-steer which had to be rescued by the ESP system. Which simply confirmed what my eyes suspected… The E-Mace is as tall and unstable as a teenage supermodel in platform heels.

It looks superb but is essentially a jacked-up diesel hatchback at four times the price because it says Jaguar on each end. Hang on, I’ve got even more metaphors – this is like sushi. Which most people just eat it ‘cause it’s pretty. It doesn’t actually taste of much, perhaps a tad of salmon or a short Wasabi burn but the rest is just stale seaweed and fluffy rice.

Or is the E-Race like an orchid? They only look good in the shop display but quickly turn into a dead twig which your wife lovingly feeds ice cubes until someone buys her a fresh plant. Oh yes, and its ridiculously compact base means that it also topples over at the first sign of a mild breeze.

So. Is the Jaguar E-Vase just an achingly tasty dish in trembling platform shoes?