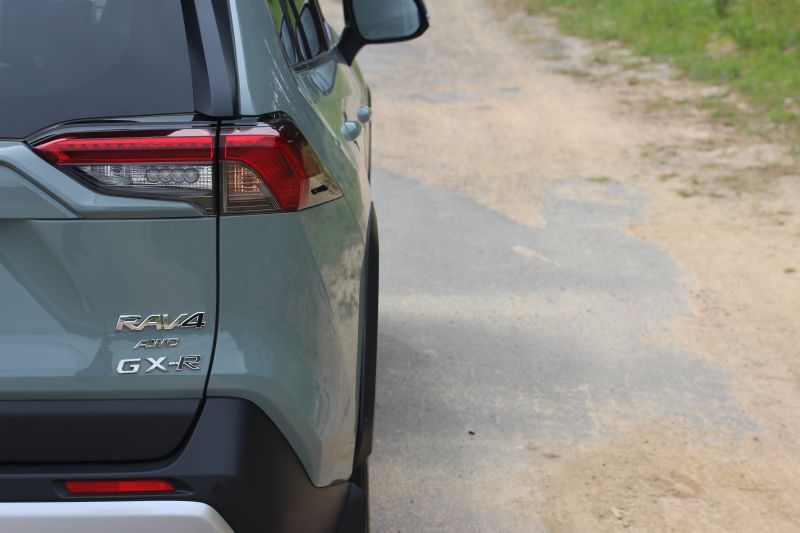 If you didn’t know it yet, I’m a complete sucker for weird car colour combos. You can shove your whites and blacks, I like pearlescent yellow and maroon metallic. So this grey Toyota RAV4 press car with its half-orange interior started off on a good foot… but how did it do after that?

Stop yelling. I hear you. A car’s colour has very little to do with its merits and even yours truly with his psychedelic glasses knows that. But I strongly believe that a vehicle’s available paint spectrum tells you something about its intended use, target market and fun-factor. Audi A6? Fifteen shades of grey. Fiat 500? Think smartie box.

Which pretty much brings me to the crux of this review, the rejuvenation of Toyota’s compact SUV. There were some cool colours in generation one but the RAV-4 soldiered on through a few more iterations with the sort of palette you’d find on the outside of your nearest security complex show-house.

It was a good car but needed some funk.

Most buyers opted for the boring but frugal turbo-diesel versions while others chose the revvy and more affordable petrol models. The naturally-breathing power plants have even more upsides – longevity being the biggest – but their hosts were a bit skimp on specifications. Which brings us to this, the 2.0 AWD GX-R.

While they were busy mixing crazy hues and slapping patterns onto fabrics, Toyota also inflated the new RAV’s gadget count and most of its dimensions. The longer wheel-base and width don’t always gel with the angular new design language and this flat grey colour didn’t do it any favours either.

There’s a slight imbalance to its proportion.

However. Having typed that, I’d much rather pilot this than a drab old Fortuner. Again, there’s nothing much wrong with it but it desperately needs some style. The new RAV4 is stylish, at least in this author’s mind. Just do us all a big favour and go for a loco colour, or at least something metallic, because this SUV deserves it.

Right, what’s it like to drive? For starters, any CVT haters need to please move on immediately. I’m happy to report that in the rubbery world of “Continually Variable Transmissions”, this is one of the better ones but fear that those among you who think of wailing scooter races will detest the way that this car drives.

It often tries to fool its operator by simulating gear changes, bless it, but quickly resorts to the slipping-clutch routine when hurried. During our performance runs it pretended to shift gear once (“first” to “second”) but then simply clung onto the engine’s 6,600rpm red-zone. Yes, continuously.

For the record, there is a manual RAV4 available and as luck would have it, it’s also the cheapest one. All others use this one-gear-fits-all device to send the 2-litre in-line four-cylinder petrol engine’s 127kW or 203Nm to the front wheels. This GX-R model (and a 2.5 mild hybrid) can also send their efforts to all four wheels.

Thanks to sensible wheels and decent McPherson / double wishbone suspension, the ride is acceptably comfortable on most urban terrains. It’s certainly better than most of its illustrious competitors with 29-inch alloys. Add 195mm of ground clearance to make the new RAV4 pretty capable in most situations.

Toyota claims a best-case average fuel use of 6.5L/100km from the 55L fuel tank while other holiday-worthy traits include improved rear leg room and a generous 700L boot. Obviously it has the usual safety and convenience features like ABS brakes with adaptive cruise and seven airbags with wrap-around park sensors. Sjoe!

Other stuff I can report on is the bizarre interior texture and shape combination (its ventilation knobs are rifled), elevated to extreme levels by this press car’s mix of black, light grey and bright orange surfaces. It made me smile, every time I got in, for a whole week. Granted, it’s part of this dearer model’s kit but it comes highly recommended.

As do the multiple 12V sockets, climate control, front seat heaters and half-digital instruments. The seats are comfy, the headlights are decent, its interior mirror is self-darkening, there’s a Marie-Biscuit spare wheel, the sound system’s not too bad but the touch-screen media thingy demands a few rounds of practice.

All this costs about R532,000 and comes with a 3-year/100,000km warranty and six-shot/90,000km service plan. Not exactly a bargain but, with the right boxes ticked, a no-brainer for anyone who wants Toyota’s reputation with a good dose of fun.