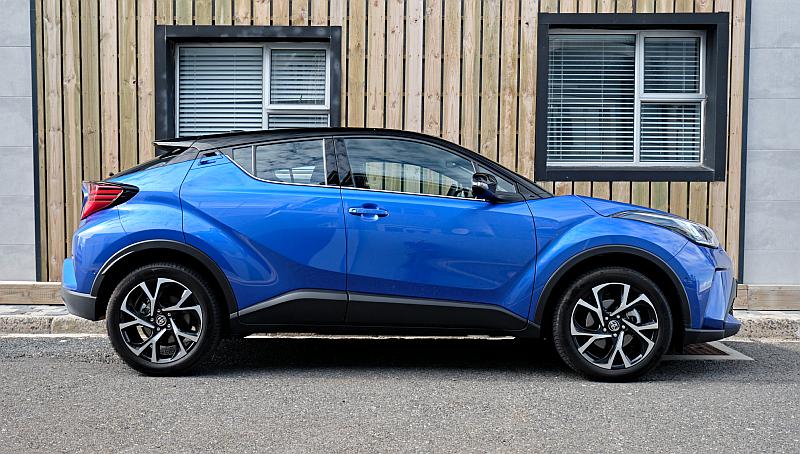 The world recoiled in unison with a collective gasp when Toyota released their bat-excrement crazy C-HR a few years ago. Heavens above, how could the maker of slab-sided pickups come up with something that could make Aston-Martin stare?

My admittedly far-fetched theory is as follows: Toyota needed a sacrificial lamb. Something they could chuck into a volcano to please the Design Gods. Because all their vehicles were a snooze-fest of dull proportions and dreary details, only something outrageous would give them the street-cred they secretly desired.

And that’s why the C-HR was born. Not just as a sub-compact SUV, or a way to irritate Honda with its badge hyphenation, but to show us all that Toyota could really let their hair down if they needed to. And what did we all do? After a few ooh’s and ahh’s, we mostly ignored the C-HR and bought other vehicles.

Does that mean it can go away now?

I don’t think so. Despite its loony shape, this vehicle fills an important gap in the Japanese manufacturer’s line-up. And unless you haven’t noticed yet, most other Toyotas have suddenly taken a daring leap in terms of design: Rav-4, Corolla, even the big 4×4’s have quite a bit of style going on. Thanks again, C-HR, for paving the way.

Hopefully that trend will continue because I will immediately stick my hand up as one of Toyota’s biggest design critics. Solid cars, super value, snoring looks. The C-HR was the first-ever Toyota which captured my interest and (as mentioned above) its chiselled nose and freaky creases wandered into the likes of the Corolla and Corolla hatchback.

Whose looks I also quite fancy.

Unfortunately it may take a few more years for the buying public to follow suit because many buyers appreciate the nondescript looks of their trusty Toyotas. Those among us who don’t want to make a scene will have to shop elsewhere until – trust me on this – every single new car will look like a Picasso painting.

That description also applies to the cabin of this front-wheel drive city SUV. Look at the disproportionate but beautifully swooping shapes around its driver-focussed infotainment screen. And how that piano-lacquer surface dances over the outer air vents and down the stunning door trims. What!

While we’re down here, just look at the weave pattern in those surfaces. It’s beautiful. I’d like a gym bag made of that material, please. I could spend hours drinking in all the fantastic shapes but here are a few more of my highlights: the boomerang dome light, bewildering ceiling indentations, bent climate controls, bizarre steering wheel shapes and that chrome gear lever top.

Again, what the actual?

Just to prove that I wasn’t completely smitten with superficial stuff, I’ve noted a few negatives from my days of driving this striking blue C minus HR. Because of its shape, the front window / mirror / quarter-light area is a bit messy; nor does the door-card meet the dashboard perfectly. On both front doors.

The rear windows – again, as victims of the design – are incredibly small and will give claustrophobic passengers a hard time. The rear door handles also emphasise form over function so their shape (and colour contrasting) is sublime but their physical position and shape is incredibly challenging for small or frail operators.

I could go on about the tiny rear windscreen or bad ¾ visibility (par for the course) but would much rather point out the intricate alloy wheels, chunky backside with wild curves, or how this two-tone blue and black paint job makes the roof look like it was stuck onto a convertible space ship. From the year 1955.

Also, at this point I should probably tell you what this car is like to drive. The biggest hurdle in this vehicle is that it doesn’t come with vertical thrust rockets but a rather puny 1.2L 4-cylinder turbo-petrol engine. Nonetheless, it still puts out 85kW or 185Nm through either a six-speed manual or this CVT effort.

CVT means continuously variable transmission so it’s one of those scooter-type gearboxes which love to whine or drone a lot. I honestly don’t mind it but think it’s an uninspired choice for such a striking car. Also, instead of offering manual or CVT for all three trim levels, the top model can only be had with this transmission.

Before you dismiss the fancier C-HR’s because of this, I urge you to take one for a test-drive because – like most competing brands – Toyota has managed to tone down the drone with programmed (simulated) gear changes. As painful as that may seem to an engineer, most buyers don’t want efficiently constant rpm’s.

The simulated cog swaps can be seen in our performance tests, which yielded a best 0-100km/h sprint time of exactly 11 seconds. Toyota claims 11 point one. Standing on the brake pedal from 100km/h made this bright blue machine stop dead in exactly 2.83 seconds and 36.7 meters; both of which are fantastic values!

More importantly, this vehicle is easy to pilot around town (bar the visibility issue) because it stays well within the engine’s usable torque range. Full throttle commands are obediently dealt with in all but high-speed scenarios, while the slightly firm suspensions and 225/50R18 tyres provide a relatively smooth ride.

But that’s probably secondary to anyone who’s genuinely interested in this Toyota C-HR. Yeah, maybe the dealer count appeals to them but my bet is that almost every buyer chose this because it just looks so amazing. And to top it all, hopefully it will also be as reliable as all its siblings from that brand.