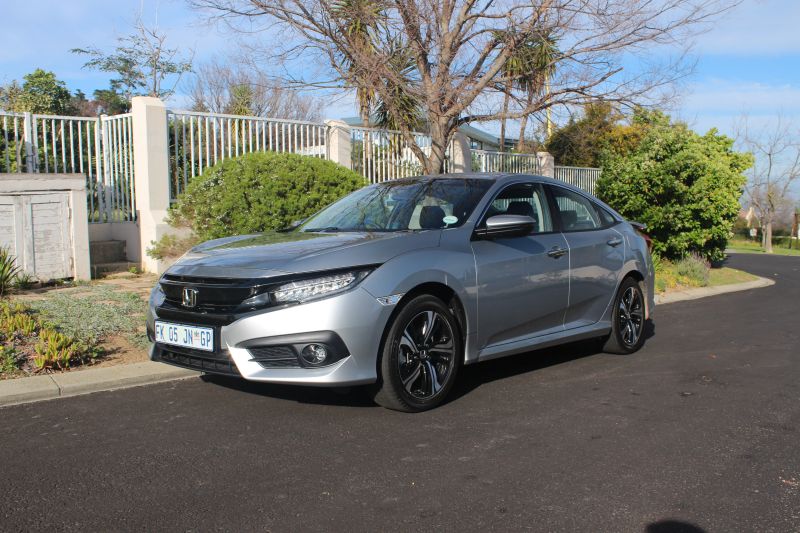 Have you noticed how some cars are starting to look the same? Not to name and shame, I can think of a few luxury marques whose range can only be deciphered by a veteran salesperson or the designer himself. Happily, Honda didn’t get that idea (yet), especially with their new Civic sedan.

Although their press release talks about pillars of development and in-depth fiddling, it’s the car’s looks which are instantly striking. The front has a distinct Honda flair to it but can’t be mistaken for another of its type. Protruding silverware with a proud logo and crisp LED lights make sure of that.

This business end drew the most favourable comments from observers as the new Civic sedan’s profile is decidedly… umm, un-sedan-like. Fastback would be a better description for the lazy decline of its window line which ends in a stubby and rather small boot lid (no real fastback).

Remarks about this area, with its large and oddly-shaped light clusters, were less than kind. Accentuated by this Sport model’s enormous rear deck lid spoiler, many found the overall look to be incoherent. I’d settle for “mismatched” but therein lay its appeal – I found it unique and interesting.

Honda’s always been good at that – shaping metal into strange and intriguing forms. The eighth-generation Civic hatchback springs to mind, as does the second version of our local Ballade models. Back then, my brother described its pop-up headlights and bizarre cockpit as pure spaceship material.

Speaking of which, similar thoughts arise inside this gen ten Civic sedan where the dashboard shows bold curves which frame a playful Japanese touch-screen media system and strange, half-digital instrumentation. The operation of said infotainment system is less than intuitive but it offers plenty of modern features.

Bluetooth, seven-inch colour screen, RDS radio, smartphone links, customizable colours, consumption data, it’s all there. Naturally, most of this can be commandeered from the steering wheel which includes regular buttons, multi-rocker switches and even a touch-sensitive volume control. How wonderfully bizarre.

More conventional and just as welcome is Civic’s comfortable seating for four tall adults and excellent leg-room at the back – up by a massive 55mm. Coupled to the multi-link suspension and improved sound insulation, this Honda quickly proved to be a planted, quiet and comfy long-distance cruiser.

The electric power steering is a tad on the light side but eager drivers will have a completely different problem with this 1.5 Turbo Sport model. Its 127kW and 220Nm arrive in a typically fervent Honda nature but get distributed to the front wheels via a CVT (continually variable transmission).

I’m probably one of the only motoring journalists in the world who likes (or appreciates) CVT cars. My wife owned one for a few years and after adapting to its elastic response, it turned out to be extremely comforting to pilot and an uninterrupted pleasure when overtaking. Sporty? No.

Shift paddles in this model allow a semi-pleasing simulation of gear ratios but the toothless gearbox makes this Civic anything but an athlete. Nonetheless, Honda claims 0-100km/h in 8.2 seconds and our Racelogic ‘Box spat out an impressive best time of 7.53 – keep the engine at full tilt and it should hit 200km/h.

As for fuel consumption, the optimistic average figure of 5.9L/100km won’t be possible in everyday traffic. However, this is another thing I appreciate about a CVT, if you do a lot of constant cruising and treat the throttle nicely, that gearbox will dial in the optimum revs and 5.9 should be absolutely plausible.

Pricing for this model currently sits at N$430,000 which is hardly a bargain but won’t be inflated by costly options. You may also opt for weaker or fancier models either way of that price. Honda includes a massive five-year / 200,000km warranty and five-year / 90,000km service plan with each Civic sedan.