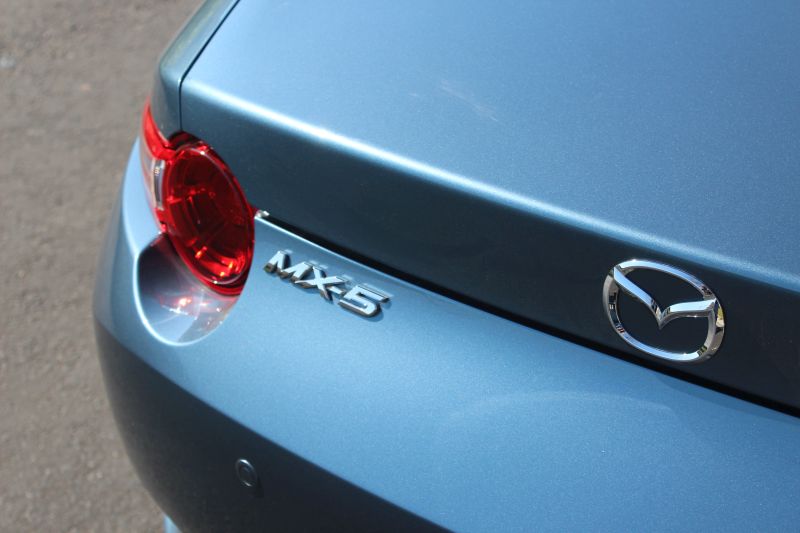 There’s an itching in your soul. Somewhere between cellphone bills, more grey hairs, meetings about meetings and the school run you feel a void of unhappiness. What you have my friend, is a mid-life crisis, and the only thing that’ll fix it is a little red convertible sports car. May I suggest the new Mazda MX-5? 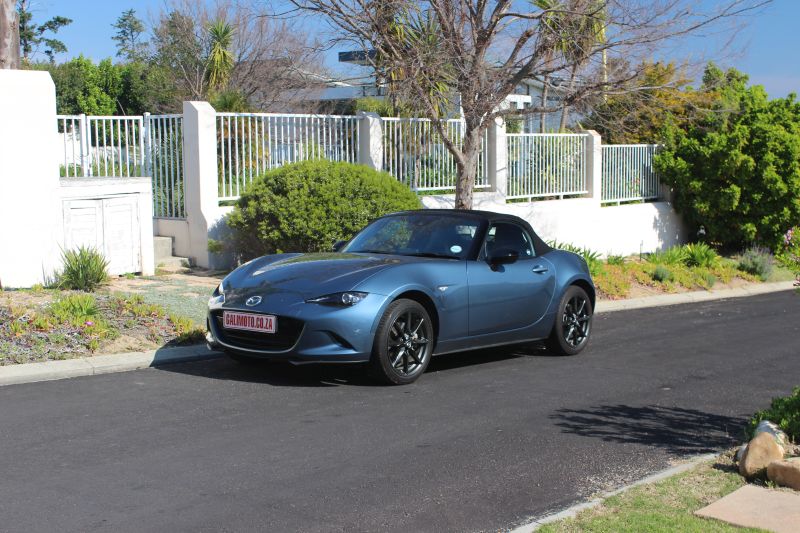 Of course you don’t need to suffer from age-dependent anxiety to purchase this cool little cabrio but if you do, it’s absolutely perfect for the job. Corvettes and Mercedes SL’s are too expensive, classic British roadsters can be moody and this compact Japanese jobby is a bewitching combination of all of the above. 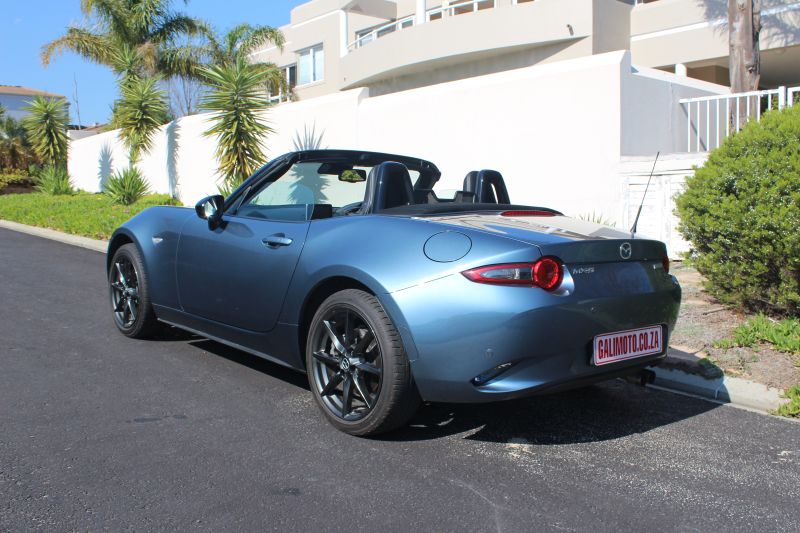 It has the modernity of an SL thanks to vicious keyless entry and start, a clever infotainment and media center, as well as tasteful leather seats with integrated BOSE speakers in the headrests. The only option is sat-nav software which you can acquire from the dealer at a later stage. Why aren’t all cars like this? 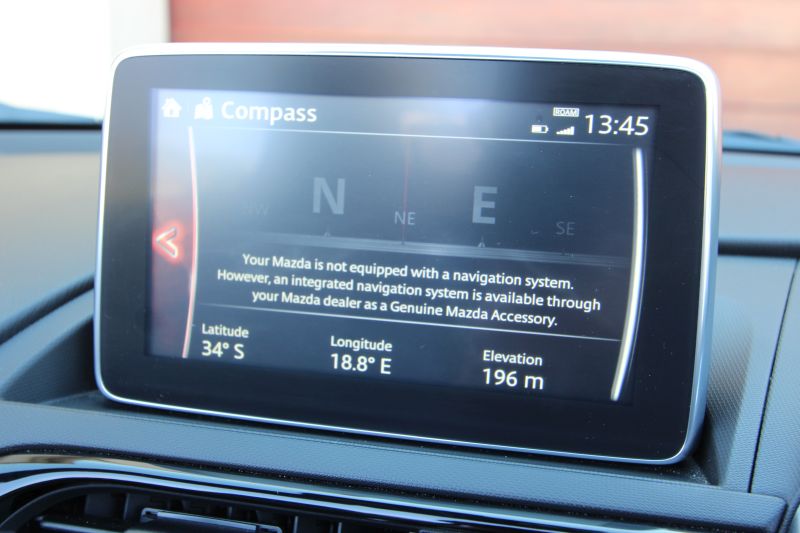 Anyway. If you’re lusting after the English roadster feeling, MX-5 has that too. Its compact dimensions look fantastic, accentuated by interesting Japanese design details. The two seats are mere inches off the ground, its engine sits behind the front axle, longitudinally mounted with drive to the rear wheels via a crisp six-speed manual. 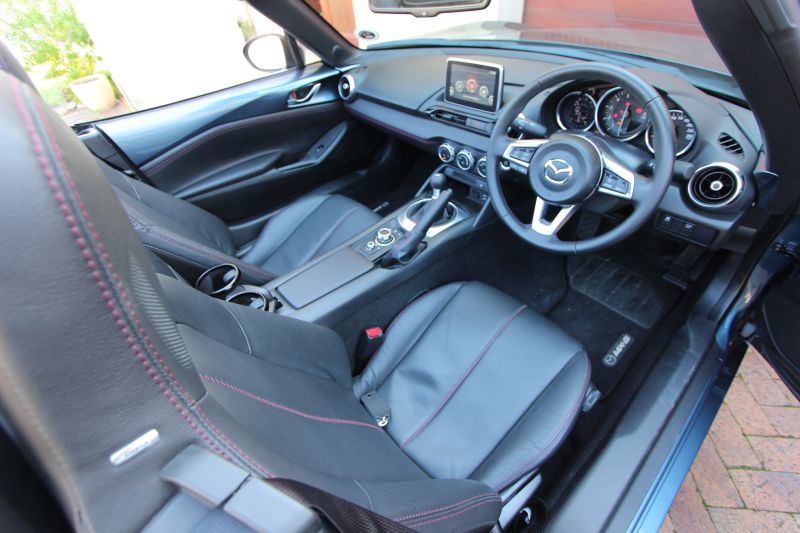 That takes care of good weight distribution and the classic roadster layout, followed closely by a manual roof which operates as quickly as you can. When the sun peered through the clouds at an intersection in town, I unclipped the main lever, flung the roof backwards and pressed down to lock it. All in all, five seconds tops. 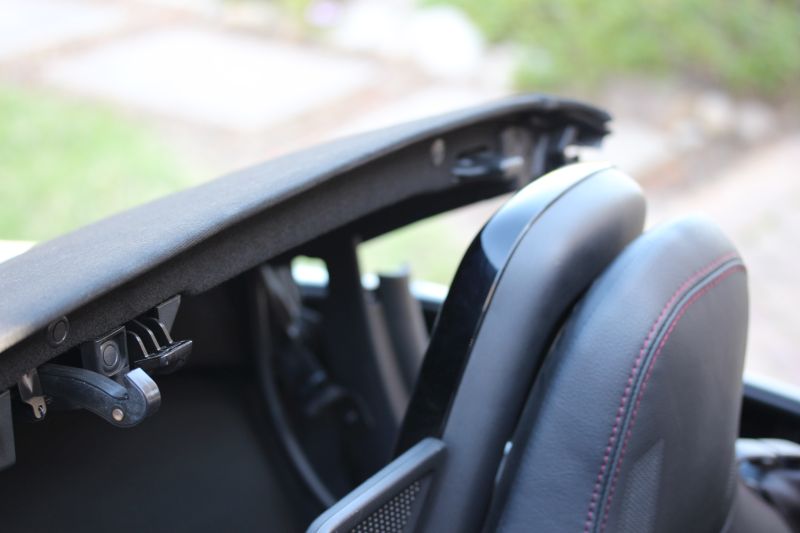 Because this speedy soft-top sits in its own binnacle behind your head, there’s even a small boot area of 130L. In other words, one big or two small bags for a dirty weekend. There are a few other compromises I need to report, starting with occupant space. Being Japanese, the MX-5 doesn’t really cater for tall folks. 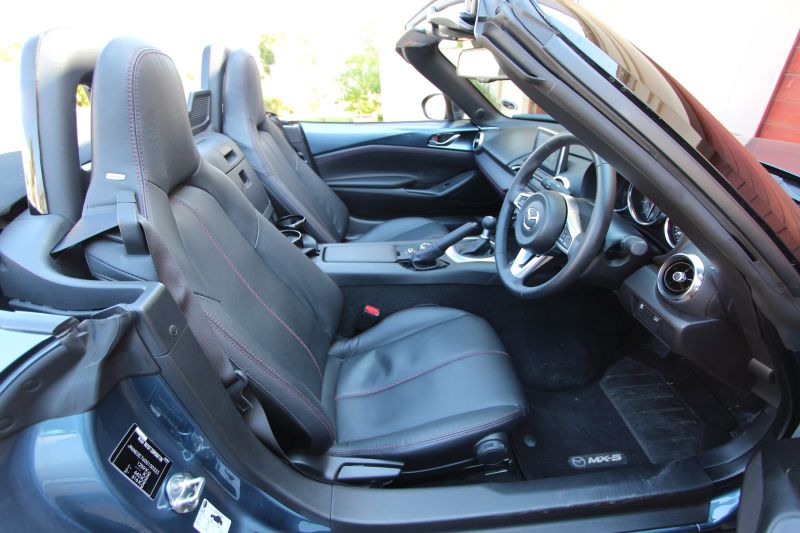 I am a tall folks. Behind the wheel, my right leg was pinned against the door while my left leg was caught somewhere between the steering wheel, clutch and hand brake. It wasn’t much better in the passenger seat, where I struggled for head- and leg-room, unless the roof was down. Getting in or out is also a bit, let’s say, undignified. 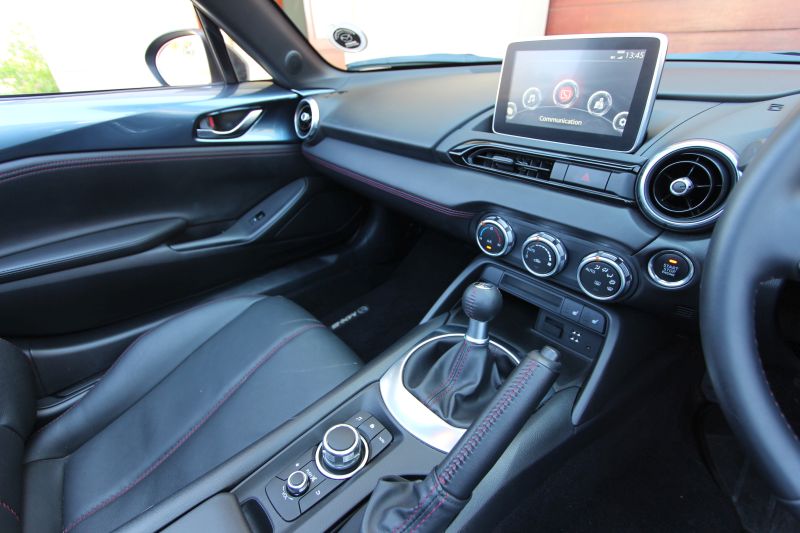 MX-5 doesn’t have a cubby hole or 12V socket but does provide a lockable storage nook between the backrests. The infotainment controls sit quite far back on the gearbox tunnel, almost at hip level. The big rev counter is flanked by an analogue speedo and a multi-display with fuel, trip and an unusual coolant read-out. 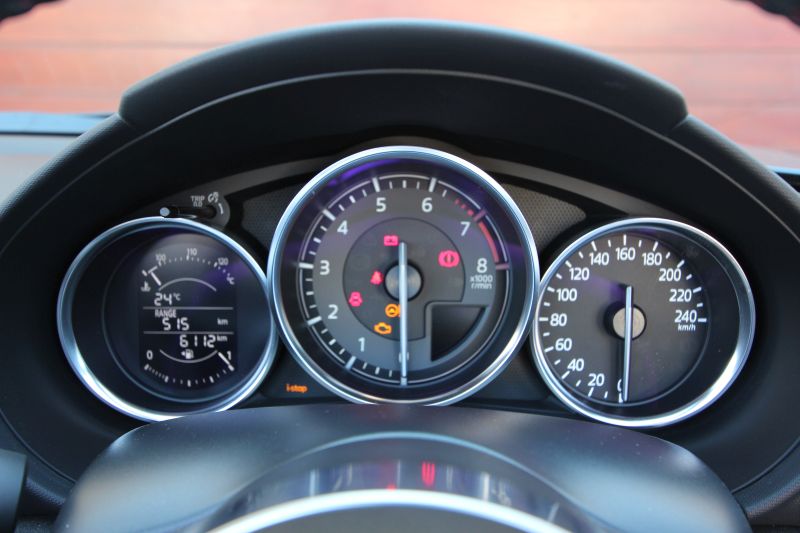 Do you care about any of that? Me neither. Based on the discomfort mentioned above, I wouldn’t buy this as my only car but would happily put up with its intimacy on weekends and special occasions. Single people, dinks or retirees who don’t have passengers or vertical difficulties could use this roadster every day. 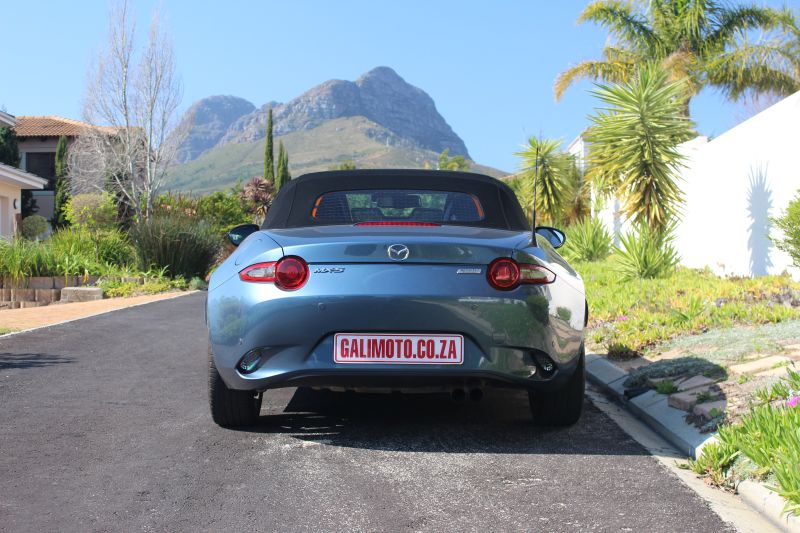 Are you ready for the way it drives? The author was quite excited about his maiden MX-5 voyage and was converted to a gushing fan within a few minutes. Its road-hugging stance, that long bonnet and a direct steering mechanism provide classic roadster feel and the firm ride inspires sportiness. 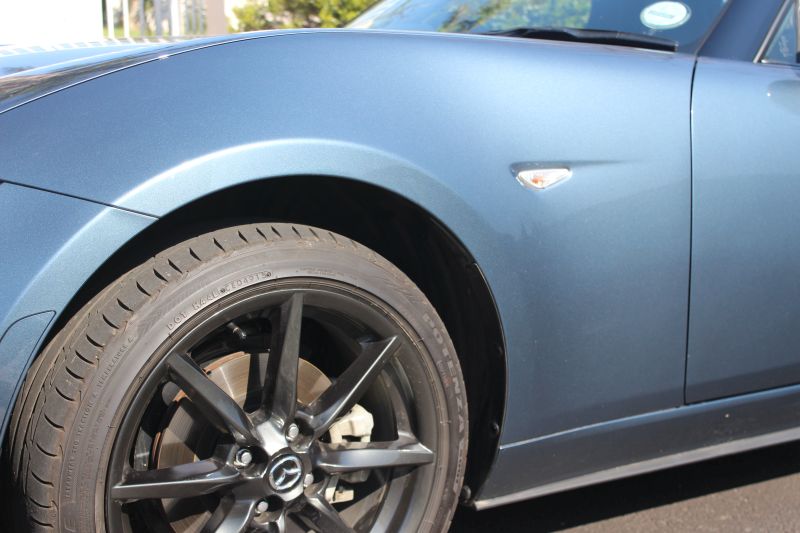 Best of all, the 2-litre four-cylinder petrol engine kicks out 118kW (160hp) or 200Nm and fights against a dry weight of just over 1,000kg. The result? A Mazda MX-5 always has sufficient power for whatever you intend and if it doesn’t, just drop a few gears and spool up the rev-happy motor. 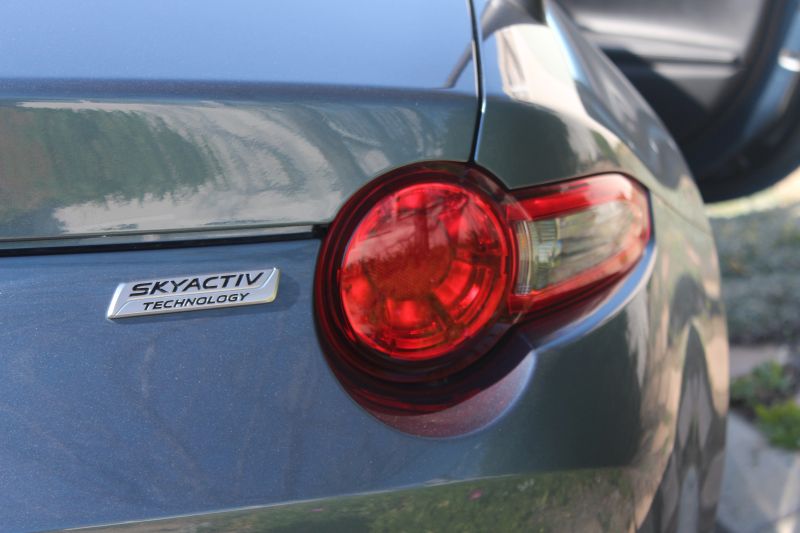 As another tester also pointed out, the engine responds to throttle blips with vigor so it has a light fly-wheel and, with its grainy noises, encourages you to put foot. The little cabrio has plenty of mechanical grip for spirited cornering but (even with activated ESP) it showed a tendency to wiggle its tail when provoked. 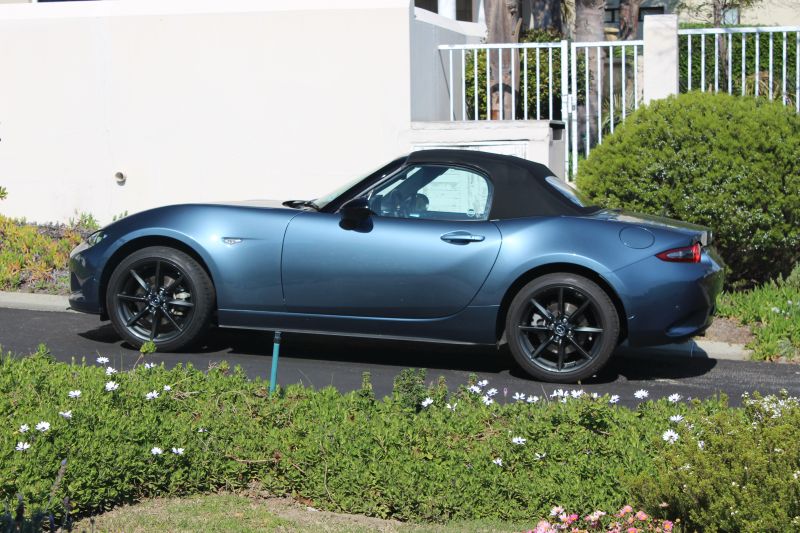 How good does that sound? Trust me, the MX-5 is everything I wanted it to be and even after a week I grabbed its keys above any others. Cold and rainy day? Just put on the two-stage seat heaters. Early meeting in the metropole? Leave earlier and take the back roads. Family airport run? Phone a taxi and go for a drive. 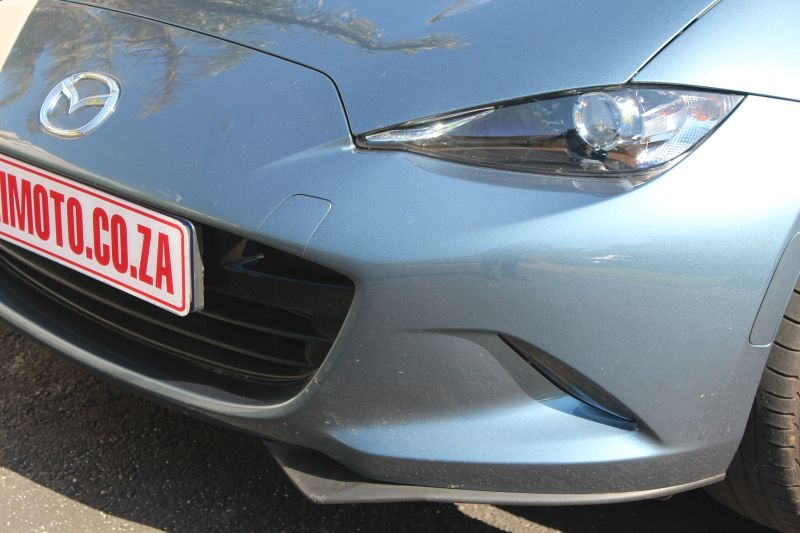 I could tell you all sorts of interesting things about our test car but they simply don’t matter. What you want to know is that this naturally-aspirated, free-revving, nippy handling convertible darts around the place with mechanical precision and that exciting al-fresco feeling your soul is crying out for. 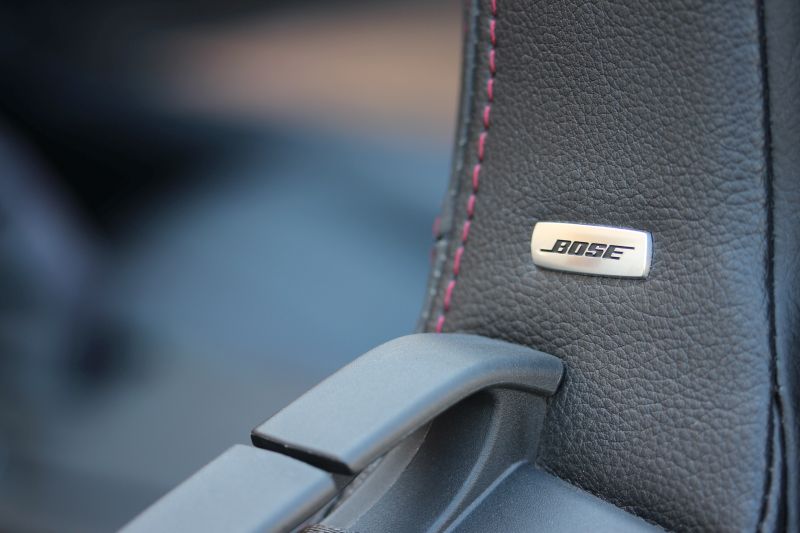 The 400 grand you need for fork out seem like a lot of money but it’s considerably less than a Z4. It’s not as fast as a Boxster but it feels fast enough; while its relatively simple engineering makes you feel incredibly involved in the driving process. When (not if) I hit my midlife dilemma, I know which showroom door I’ll be knocking on…