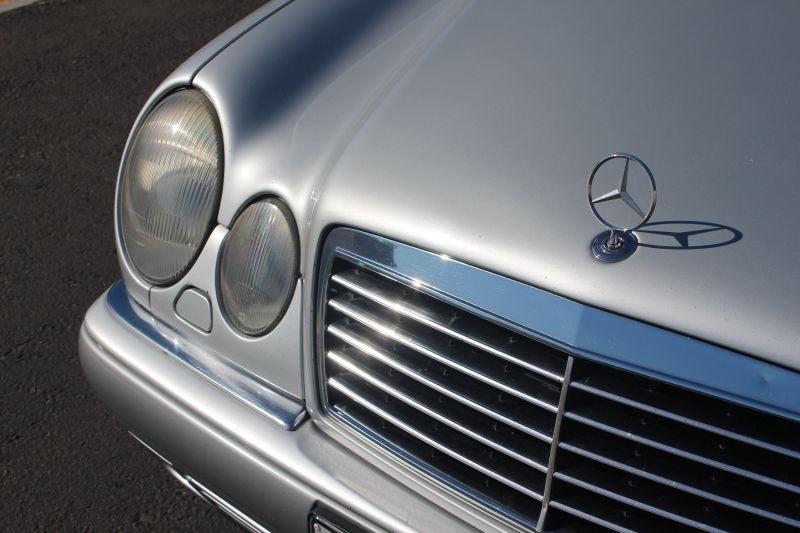 Motoring journalists can be a phony bunch, changing their opinions at a whim and usually to the tune of whoever offers them a free ride. Some can be downright hypocritical as they don’t even own a car. Well, I’d like to rectify that by reviewing my own car as if it were new; in an honest and sincere way. Promise. 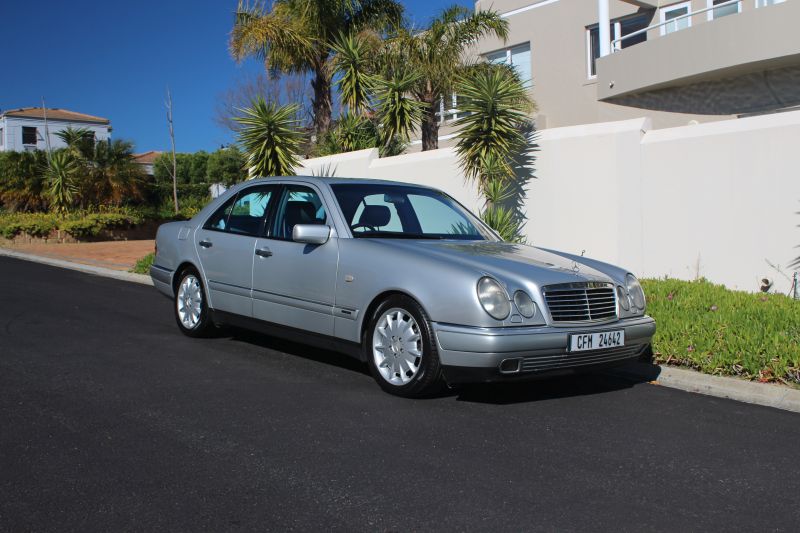 Mercedes-Benz launched the four-eyed W210 E-Class in the mid-nineties to much fanfare and even more raised eyebrows. The daring facial features of this mid-size luxury sedan took a while to find its fans (and some copycats), but shows slightly odd proportions in its transition from round face to smooth body. 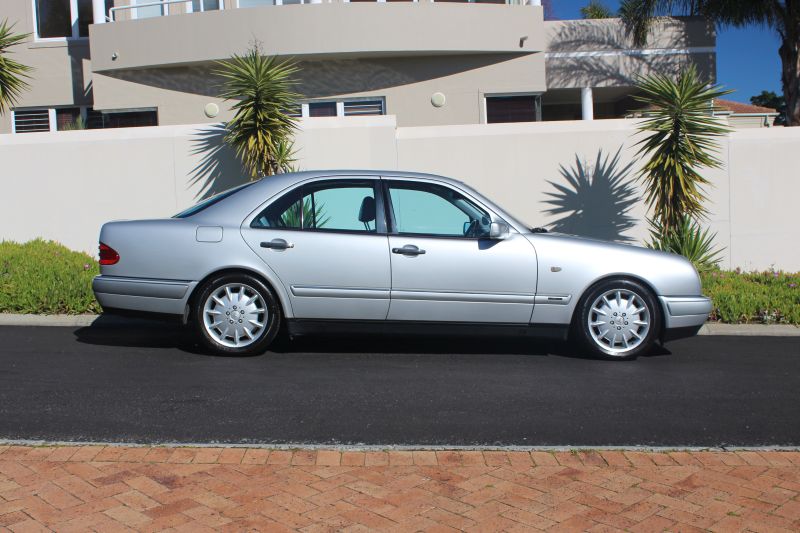 The face-lift in 1999 brought more elegance and features but our test car was a pre-face-lift model finished in silver with two-tone grey leather interior. Local buyers could choose between the luxurious “Elegance” and sportier “Avantgarde” trim – this vehicle falls into the latter category. 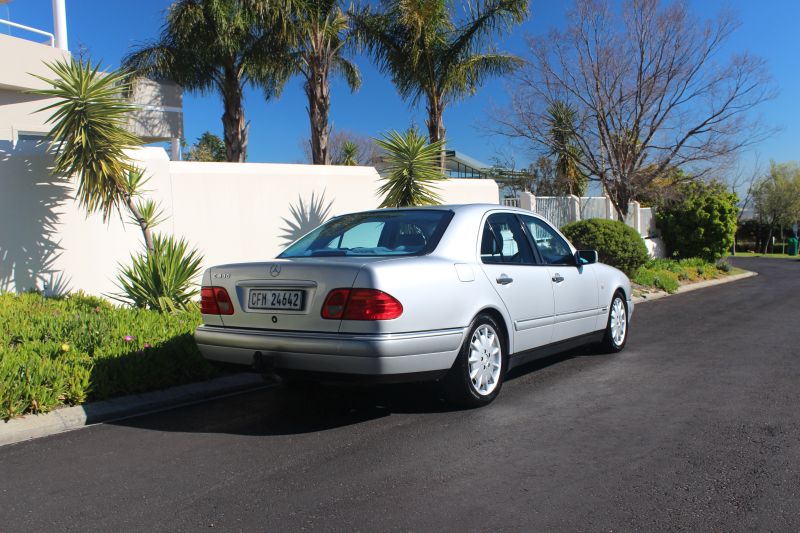 Small badges on its flanks and gear selector proclaim that too but for some odd reason, this test unit had the wheels from a later Elegance model. As it was sold seventeen years ago, I thought it best not to inquire about this with the Mercedes PR department. For the record, they don’t look bad but are one inch bigger in diameter. 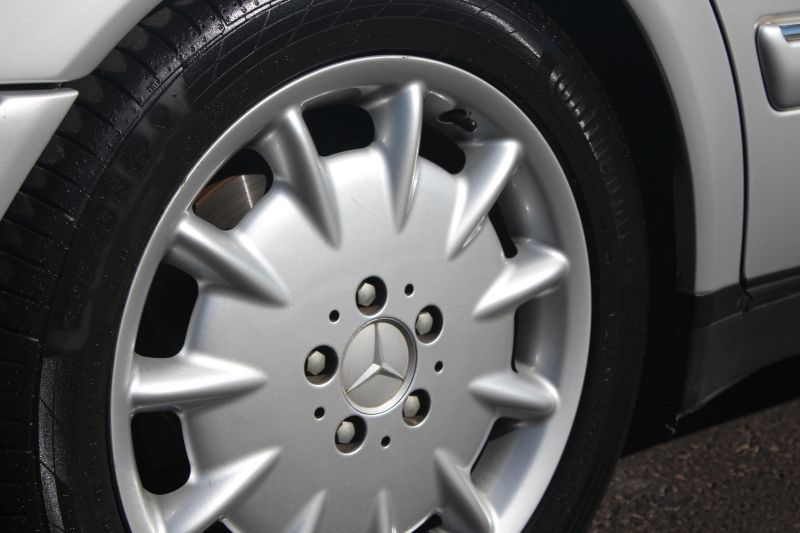 The original 16-inch alloy can be found (with a full-size tyre) under the massive boot floor. This capacious area can also be opened from inside the cabin or via a button on the car’s infra-red remote key – but the rear seats cannot recline for additional cargo options. Perhaps it was an option in other markets. 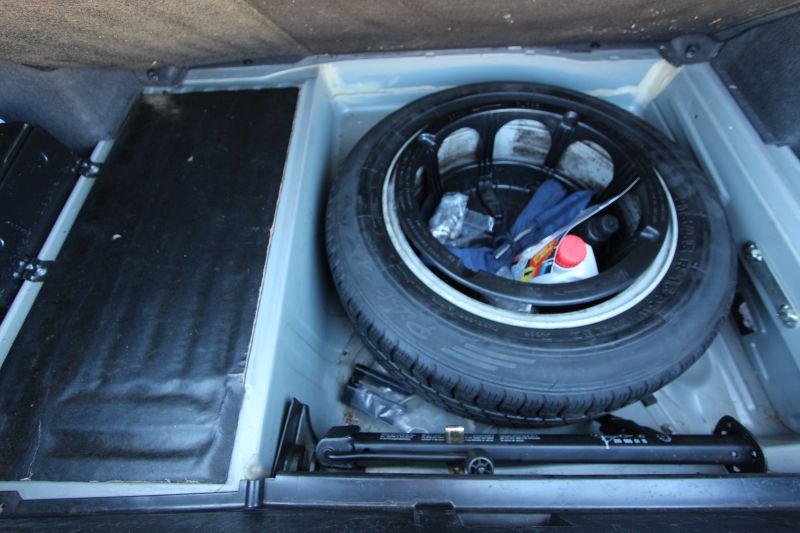 At least the rear seats offer excellent passenger space and comfort. Even with my 6ft3 position selected on both electric front seat memory settings, folks of my stature enjoy ample leg- and head-room at the back. Unfortunately, the car’s backside slumps severely with the slightest of loads – apparently that’s normal for these models. 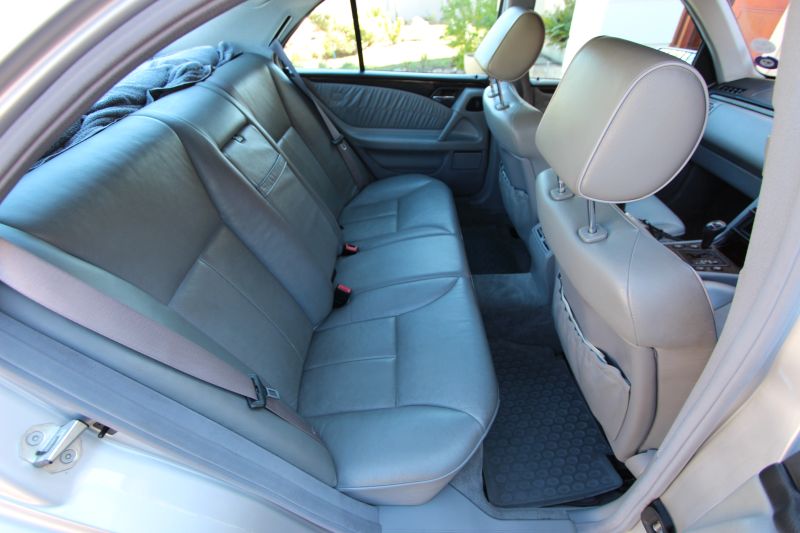 I also discovered two air vents, a sagging headliner and power windows at the back; of which one was kaput. The front of the cabin is more interesting – by late 90’s Mercedes standards – with a sober layout and easy controls. A dual-zone climate control is operated from a futuristic panel on the central dashboard. 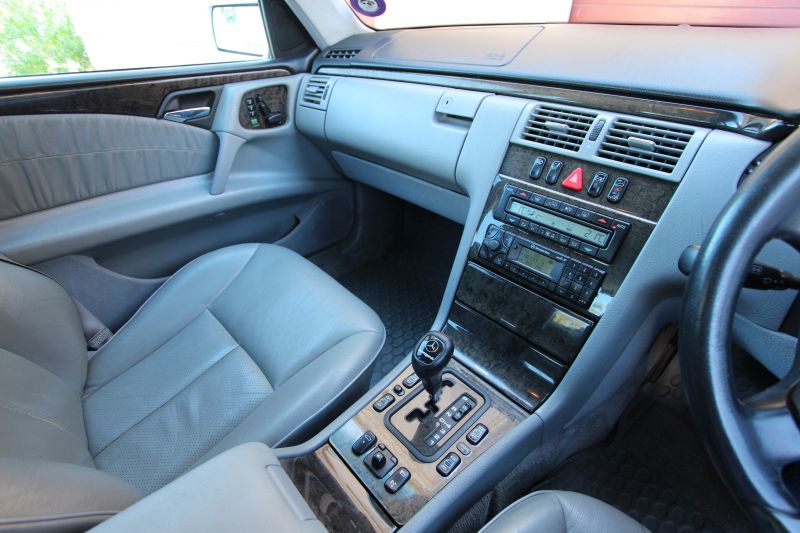 Besides four substantial cracks, the dashboard also revealed a radio/cassette unit (with six-disc CD shuttle in the boot) as well as various storage nooks and a square cup holder. Power memory seats, climate control, rain-sensing mono wiper and a glass tilt/slide sunroof are all included in the price of this E430 model. 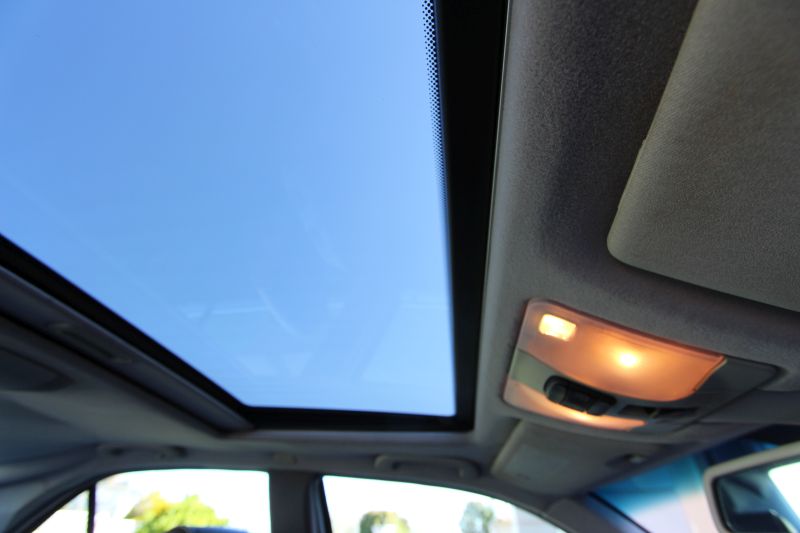 Which finally brings me to its engine: a relatively small but capable 4,3L petrol V8 with 205kW or 400Nm. Most E-Class buyers opted for the more sensible E240 V6, some stretched to an E320 but the four-thirty brings a whiff of exclusivity with it; never mind the muted growl and power of its eight cylinders. Reliable sources inform me that only 168 units made it to southern Africa. 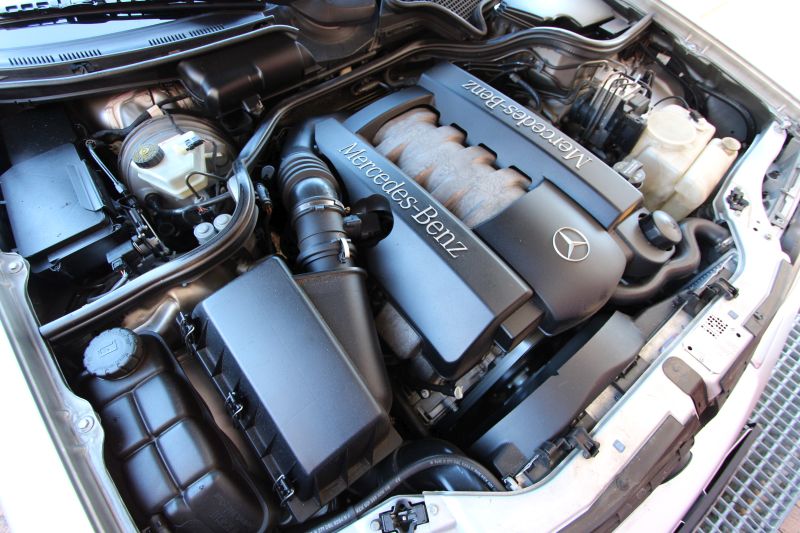 Sporty drivers keep going; this is not the car for you. A BMW 540i M/Sport may serve you better because this E430 still retains the crusty Mercedes values – power and speed but not much fun. The car’s brakes, comfort-oriented suspension and comparatively lifeless steering (with cold-start hardness) underline this. 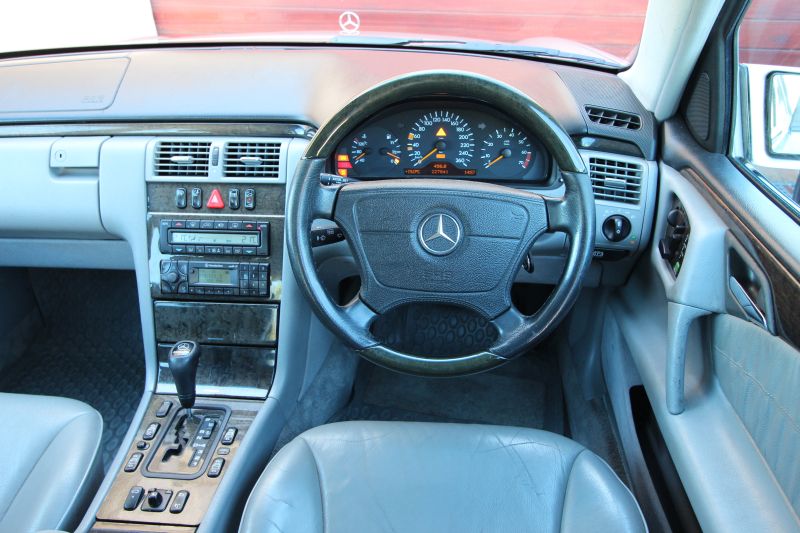 Put foot in a straight line and an E430 should dismiss 0-100km/h in 6.6 seconds (this one did 6.88) and we measured 400m in 14.99 seconds. Top speed is electronically limited to 250km/h, at which point the leisurely five-speed automatic has just settled into its top ratio. Please note that I didn’t try that – Youtube told me so. 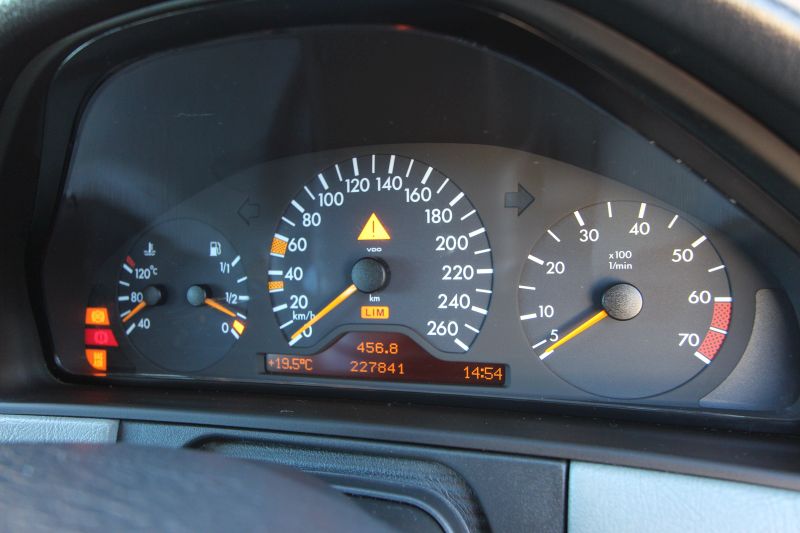 What I did try were various trips around town and a few jaunts on the highway. Although there are 205kW slumbering at the bottom of the accelerator, the E430 never feels raucous. You can surprise hatchbacks at traffic lights but the real pleasure lies in high-speed overtaking – where power seems bottomless. 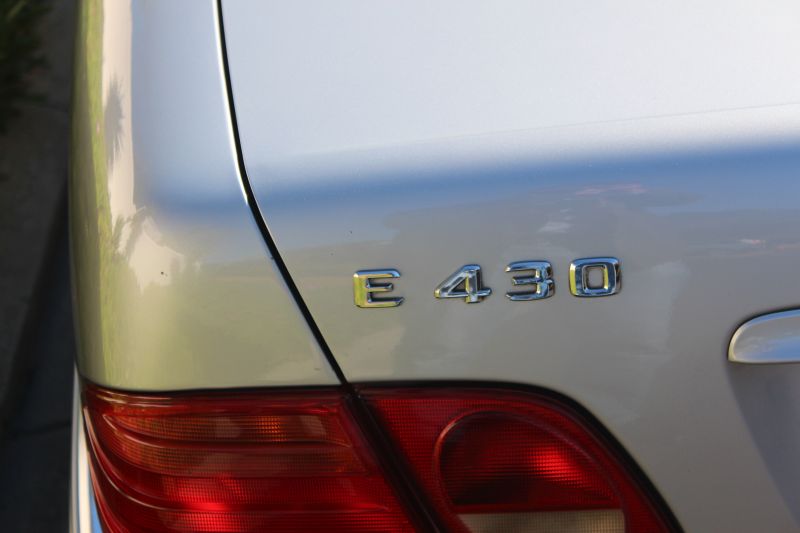 The engine’s performance is unfolded in a beautifully linear fashion; not unlike modern turbo-diesels. That’s mostly due to the twin-spark three-valve construction of this M113 engine – which went on to 500 fame, 55 AMG stardom, 55 Kompressor brutality and all the way to the McLaren SLR.

It’s only fitting that this slightly boring but extremely comfy Mercedes has the smallest and most sensible version of this engine. Fuel-wise, our test car helped itself to anything from 15L/100km (town driving) to 12 (mixed town and highway) while 120km/h cruise control yielded 8.9L/100km. The 430 only eats when you ask it to.

Included in the price of R52,500 is a warped driver’s seat cushion, faded headlights, plenty of dings and scratches, as well as a slightly misaligned and resprayed front passenger door. At this age and price bracket, be prepared to spend the car’s price every few years in repairs and servicing. In return you’ll get a big German sedan with a pretty decent bite.