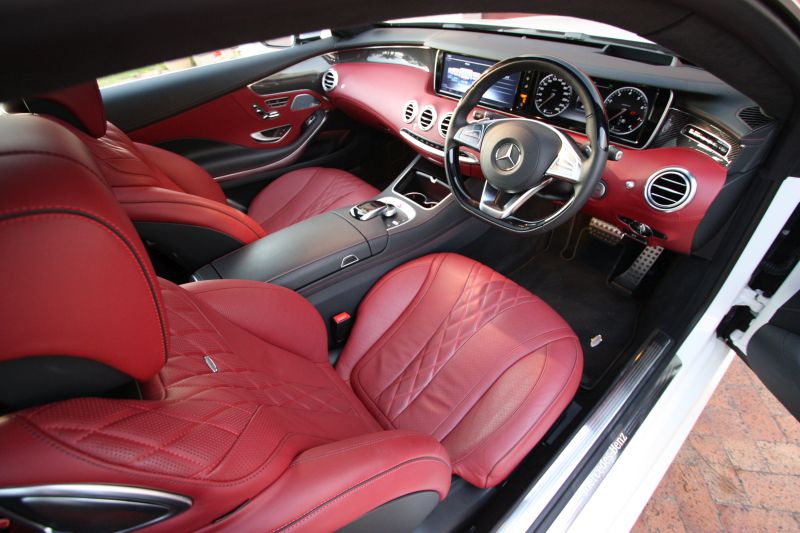 No sooner had the ink dried on my S65 and S63 AMG Coupé reviews and someone pitched up at my house with this S500 Coupé. Now; I’m not the sportiest person on the planet but I believe that getting three in a row – especially the only three models available – is called a hat trick or something.

Never mind that I tested all three Mercedes-Benz S-Class Coupés in reverse order; from most to least powerful. Never mind indeed because it confirmed something that I had been suspecting for some time. The cheapest, pardon, most affordable model is actually the best to drive and hence it receives my full recommendation.

I’m sure that at this level of investment (two to three million) nobody walks into the showroom and strokes their chin while eyeing all three models. Good luck finding such a showroom, by the way. They don’t turn their pockets inside out and look under the sofa cushions to reach for a more powerful model.

No, buyers in this segment can afford all three cars (and then some) so they’ll have unique reasons for choosing a certain version. Allow me to identify these. You order the S65 AMG Coupé because it’s the most powerful and expensive. Perhaps you even like the tug-boat V12 noises and unholy power outputs (463kW/1,000Nm).

…enough to pitch it close to supercar territory.

There’s no shame in buying the less powerful S63 because I found its power minus (33kW/100Nm) easier to launch and the thundering V8 feels just as fast in traffic. This S500 has even less grunt but in the greater scheme of automotive things, its 335kW and 700Nm are still enough to pitch it close to supercar territory.

And after driving the mental S65 or bonkers S63, I can tell you with a high degree of certainty that an S500 Coupé feels the most controllable and civilized. It isn’t even that far removed in terms of specifications, as it shares many wondrous gadgets with the other two. AMG look? No problem, just order the body kit.

This pearly-white press demonstrator had exactly that, contrasted beautifully by a bright red and black leather interior. Don’t worry; there are plenty of colour and trim options available on all three Ess Coupés. They also have auto self-guiding vented everything and very few space-age optional extras left to tick.

Should you be a fan of racing and track driving, don’t buy any of these giants and go straight for a Mercedes-AMG GT or GT S. For occasional drag racing, tree stump removal and Autobahn shenanigans, the two AMG’s will be your best bet. Normal people, who just want to drive and cruise in opulence, buy this S500.

Hand on heart, at no point during my weekly routine did I drop my shoulders and think “come on…” There are noticeable thinking pauses in the slowest drive/gearbox modes when going from coasting to half or full throttle but all this can be remedied by selecting a sharper mode or taking manual control of the gears.

…this V8 has the most chilling induction howl…

I took a lot of manual control of the gears. The 500 Coupé likes to burble around town at 900rpm (no jokes!) and because I’m obsessed with engine noises, I quickly discovered that this V8 has the most chilling induction howl in its mid-range; from about 2,500rpm onwards. Think Rover V8 or independent throttle bodies.

You don’t even need to floor the beast to achieve these wailing sounds, nor are they intrusive or annoying. In fact, leave the car in auto mode and it doesn’t emit as much as a faint rumble while changing up at no more than 1,600rpm. And the slightest prod of throttle calls upon a huge reserve of torque; at any speed.

Pair that to the intelligent suspension and multiple driver aids to create an amazing cruise ship. Depending on model and options, the car can lean into corners like a motorbike, flatten out speed bumps, follow traffic all on its own, steer itself in your chosen lane or brew the most delicious espresso. OK, that last one’s a lie.

Better still, it looks identical to the other S-Coupés and got the same amount of attention as its AMG sisters. You can drop all four windows for that pillar-less look, the active massage seats are also identical, as is the twin-monitor instrument and infotainment system, plus its slightly bigger tyres gave slightly better ride comfort.