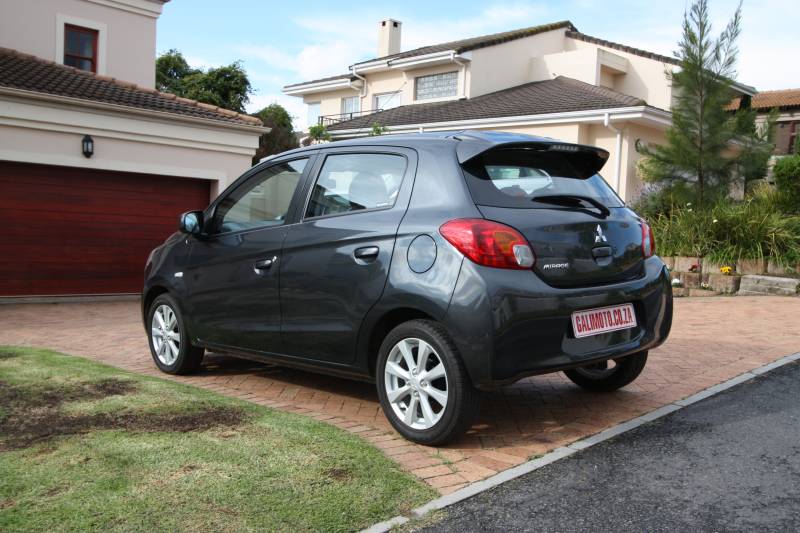 Say the word “Mirage” at your local hang-out and generally two things will bounce back. The first and most obvious is a visual illusion on the horizon while others may recall that there once was a jet fighter answering to that name. Well, now there’s a third. A tiny Mitsubishi car called the Mirage.

Actually, there are dozens of other namesakes and this is Mitsubishi’s second attempt at the name as the first-generation Mirage was sold elsewhere from 1978 to 2003. With its successful “Colt” small hatchback bridging the gap, this new Mirage was introduced in 2012 and has finally arrived here, too.

Mitsubishi’s entrance is rather late in the sub-compact party of our market where price and versatility do battle to capture as much of this sizable pie as possible. Cheap cars? We love ‘em. There’s a difference between cheap and good though, which is why I’m happy to give you my impression of the Mirage.

The very first thing I need to mention is that Mirage does its vanishing illusion name proud. Despite showing good design, a friendly face and the world’s most ambitious rear roof spoiler, our dark grey GLS test car disappeared into obscurity. Most people – including my friends – didn’t even notice it.

Thankfully, you can order your Mirage in five other colours: white, silver, blue, yellow and red. The last three should hopefully make your car stand out a bit more. Go for the first two or this grey/black if you want to blend into the scenery and become near-undetectable on the road.

Mitsubishi’s Mirage is currently available in three models with escalating spec levels. The GL starts at N$124,900 with decent specifications, for N$10,000 extra the GLX offers alloy wheels and a few toys, followed by this GLS model with more power windows, climate control and other such mad excesses at N$144,900.

All models share the same engine and gearbox combo; a tiny but very eager 1.2-litre 3-cylinder petrol strapped to a similarly rough 5-speed manual gearbox. Maximum power outputs are 57kW or 100Nm with claimed average fuel consumption of 4.9L/100km from the 35L tank promising a range of about 700km.

These figures seem very plausible as we usually average around 7L/100km in town and saw mid 5’s when cruising. During the multiple full-throttle runs of our performance testing, the Mirage not only managed a best 0-100km/h time of 11.3 seconds but also refused to tilt 10L/100km.

The odd-numbered cylinders shudder and shake the car a bit, yet I found their power delivery and charming noises to be great compensation. Steering feel, turning radius (just 4.6m), handling and brakes are on par for a small city car and every Mirage includes anti-lock brakes with electronic force distribution.

The car has a reinforced structure and offers more safety via dual front airbags, three-point seat belts and ISOFIX anchors. Remote central locking, keyless start and an immobilizer are also present in each model, as are air-conditioning with pollen filter, electric power steering, adjustable driver’s seat and steering wheel.

You also get a radio/CD player which adds USB, Aux port and steering wheel buttons in the posh versions. Interior fit ‘n finish is decent, we found plenty of storage space and a respectable boot with 60/40 split rear seats in our test car. The basic instrumentation includes a small trip meter and (in this model) an ECO light.

Mitsubishi South(ern) Africa sells each Mirage with a 3-year/100,000km warranty and 2-year/30,000km service plan. That isn’t exactly impressive but the car’s eager nature and easy operation certainly are – perfect for first-time buyers, retirement plans and fuel-savvy commuters in between.