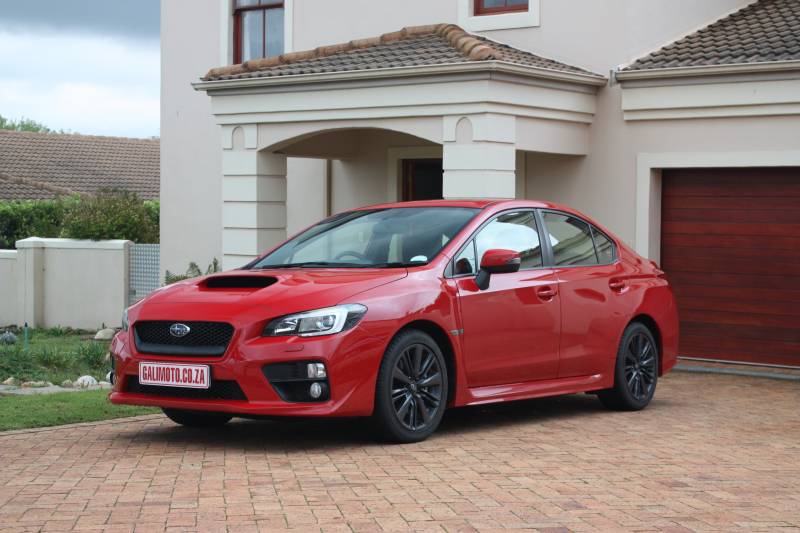 The Subaru WRX is one of the meanest, fastest-accelerating and agile cars on the road. I can vouch for that because I’ve reviewed two of these hooligan specials already. Thumping boxer engine, whistling turbo, manual shift and vicious four-wheel traction make for rocket starts and absurd cornering speeds.

Thus it was with a heap of doubt that I took hold of the key for a 2014 Subaru WRX sedan. Automatic. Everything looked right; the Lightning Red paint, four chrome exhaust pipes, small boot lip spoiler, wide side sills, angry face with big air intakes and a bonnet scoop directly feeding a hungry intercooler.

But an auto’box? And on top of that, this is a CVT automatic gearbox. CVT means Continually Variable Transmission which, thanks to any combination of pulleys, cones or belts, gives you an infinite number of simulated gear ratios. Confused? It’s like driving a scooter– whehhhhh, one gear fits all.

This car allows you to select eight gears via shift paddles and Subaru claims that first, seventh and eighth gear have fixed ratios with second to sixth adapting to whatever is required. Although I approve of a CVT’s seamless delivery, optimal power band and fuel savings, surely WRX fans are gasping for air?

Well, most of them probably are. And after a week with this slushy WRX I can reveal a few interesting facts. For starters, the WRX sedan is still available as a do-it-yourself, hairy-chested, six-speed manual. Better still, at N$449,000 it’s N$20,000 cheaper than this granny tranny and has identical specs, too.

Despite engaging every sporty system and launching with a brake-stand, the resulting shove isn’t exactly thrilling. Fast, yes, but not exciting. You can paw your way through the “gears” but the fastest method is plain ‘ol auto mode. The revs shoot up to 5,500rpm (peak figures) and just sit there until you lift off.

This shift-less surge meant that our GPS spat out a 0-100 time of 6.1 seconds and 400m in 14.4 seconds; which is impressive. Purists and petrol heads will hate it and I’m afraid to report that it also influences attacks on your favourite stretch of bendy roads. The power is there but that gearbox makes it feel disconnected somehow.

I could probably stop typing at this point and would’ve parked my WRX press car for the remainder of the week if it wasn’t for some of its hidden talents. Chief among these was this car’s fuel consumption from the 60L tank, which often came close to Subaru’s claim of 8.6L and dropped as low as 7.8 on the open road.

Out there you shall also discover that its sporty suspension has decent pliability at high speeds and makes long journeys quite pleasurable. Ditto for the 460L boot. Better yet, overtaking is an absolute pleasure as you simply wait for a suitable gap in oncoming traffic and boot it for uninterrupted acceleration.

As mentioned earlier, its specs are identical to the stick shift model and highlights for us were 7-airbag, 5-star safety with loads of driver aids as well as a 3-way drive mode selection. You also get keyless entry and start, a double-DIN touch-screen navigation unit with radio, DVD and multiple media inputs.

The TomTom / iGO navigation could do with earlier voice prompts but that’s all the criticism I can offer. Each WRX also has a good trip computer with various screens (boost gauge, clock, torque distribution, fuel consumption) on top of the dashboard which supplements the basic display between its main dials.

To recap, this brawny machine with its jelly gears costs N$469,000 and includes a 3-year/75,000km maintenance plan. It would be a fly in Subaru’s ointment were it not so economical and easy to drive – especially in heavy traffic. And in case you missed it, the manual one is still available and considerably cheaper.