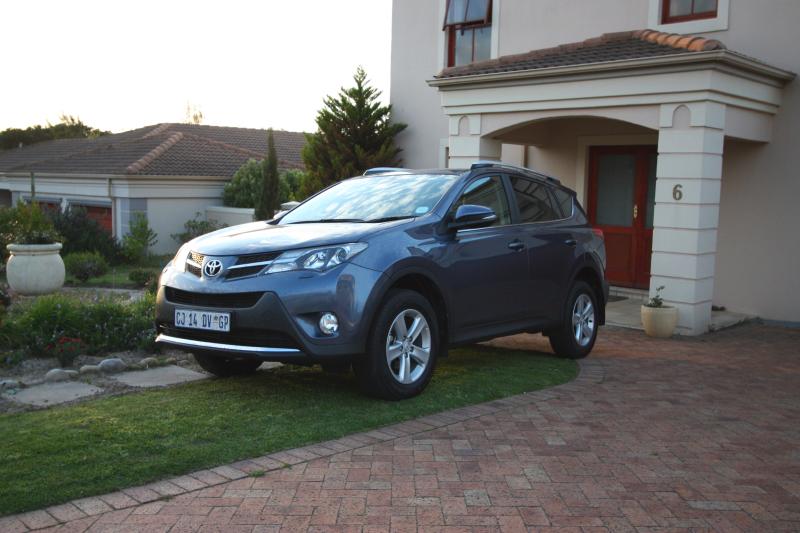 The Toyota RAV4 may happily lay claim to the fact that it was one of the world’s first compact SUV’s. Small and nimble enough to work in town with sufficient off-roady bits for the occasional adventure, four generations of RAV (Recreational Active Vehicle) can look back on many happy customers.

This latest incarnation was introduced in 2012, about 18 years after the range first appeared. And as so often happens, my better half and I were playing “spot the same car we’re in” when we both agreed that the first little Toyota SUV’s had quite an endearing shape, especially the two-door version.

That doesn’t mean every subsequent RAV4 was dipped in ugly sauce – they all presented themselves with the inoffensive charm and contemporary design features one would expect from such a car. Toyota recently ushered in a more daring and angular design language and the 2012 RAV got the full treatment.

It may shock a few people or take a while to get used to but everyone we interviewed noted that the shape is interesting, most certainly modern and won’t be confused with anything else in a hurry. The tapered headlights and grill, as well as those protruding rear lights tell you that this is a modern Toyota.

Ditto for the interior, which is doing its utmost to upstage the already strange 86 and Auris cabins. There are wildly differing surfaces and (improved) textures arranged in multiple layers and whereas there are clusters of buttons all over the place, it won’t stress a new owner to adapt to this layout.

A big touch-screen infotainment system helps to unclutter the cockpit and most instruments are easy on the eye. Not so the multi-function display below the speedometer – it’s a little on the tiny side and while it offers plenty of trip information, the digital temperature gauge and a few other read-outs are too small.

I’d love to take another swing at Toyota’s insistence on using an LCD clock in their vehicles but I have to concede that some fans of the brand may actually appreciate this simple time-piece. Also, it pairs up quite nicely with the car’s LCD climate control. This dual-zone item is also easy to comprehend and operate.

Seating comfort and space is impressive, there are lots of storage nooks and pockets, while the rear furniture folds flat into the floor which allowed our RAV4 VX to carry two huge loudspeakers. Not content with leaving it at that, we applied a bit of Tetris logic and transported an entire dining room set with ease.

Rear and ¾ visibility are ok-ish but this model provides a reverse camera and park sensors for tight maneuvering. Toyota lowered the new RAV4’s roofline (by 25mm), increased its width by 30mm and the wheelbase grew 100mm; they also moved the spare wheel from the rear door to below the boot floor.

The current RAV4 range includes four models, our test car was the range topper VX with a 2.5-litre petrol four-cylinder engine and six-speed automatic gearbox. Maximum outputs are 132kW (180hp) or 233Nm, while claimed averages are 8.5L/100km and 198g CO2/km.

After a whole armada of twin-scroll triple-clutch technofests had littered our driveways, the non-turbo normal-auto Toyota was a wholesome change. Its six-speed auto’box isn’t lightning fast but it is supremely smooth and exceptionally obedient – the Eco and Sport buttons also deliver what they promise.

Our weekly average was hovering just above 8L/100km and I’m delighted to tell you that with a bit of careful driving I managed to briefly get that figure down to 6.4L/100km. That means you can expect a decent range from the 60L tank if you hit the open road and behave yourself.

The RAV4 will impress on long journeys as much as around town, it’s very easy and relaxing to drive, the engine is perky, handling is commendable for a small SUV and we couldn’t detect any torque steer. A bit of mild off-roading was easily conquered although some occupants remarked that the ride was a little hard at times.

The RAV4 2.5 Auto VX model will set you back N$410,300 but includes luxuries like Xenon lights, keyless entry and ignition, electric everything, Bluetooth, CD, USB and mp3 capabilities, sunroof, leather trim as well as all modern safety features. Thanks to these, it recently got 5/5 stars in the EuroNCAP crash test ratings.

Servicing is every 15,000km on a 5-year/90,000km ToyotaCare plan with a 3-year/100,000km warranty. This fourth generation Toyota RAV4 most certainly impressed us and we suspect it will continue the success of its range for many years to come.