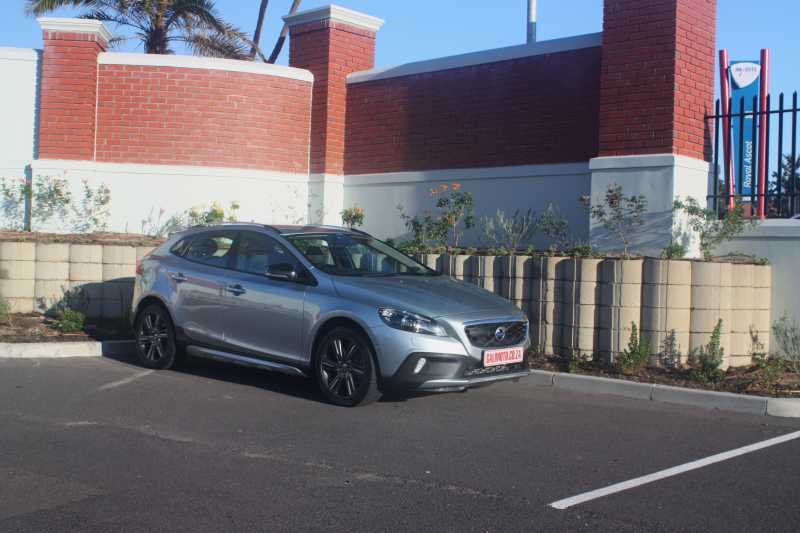 Niche cars are all the rage nowadays. Niche cars, in case you didn’t know this, are vehicles which fill alleged gaps between various segments of the market. Volvo’s V40 already straddles hatch and estate chairs but has just been given a pair of gum boots to turn it into the V40 Cross Country.

Niche cars are all the rage nowadays.

Niche cars, in case you didn’t know this, are the stuff of my nightmares. I’m a black-or-white kinda guy and seriously dislike any trendy, fleeting shades of grey. This Volvo managed to escape my wrath because (a) I adore the V40 and (b) it only shares this segment with the cool Audi A4 Allroad.

Both of them are dollied-up versions of accomplished compact estate cars and their newfound sense of adventure doesn’t spoil the essence of the originals. Extra ride height and sturdy plastic cladding give the V40 Cross Country a more purposeful look but does influence its lines a bit.

That doesn’t mean it’s now a hideous old thing, the V40’s delicate design details have just received a bout of butch. In the right colour, with enough of the zany interior hues and trim options ticked, a Volvo V40 Cross Country could very well vie for coolest car on your street.

Unlike Audi’s Allroad, which is only available with quattro four-wheel-drive and two engines, Volvo offers the Cross Country in almost as many variants as the bewildering V40 price list. Crucially, only the T5 turbo-petrol top model can scurry around on all fours (optional), the rest are all front-wheel-drive.

If this was a mistake remains to be seen. I wouldn’t be surprised to find that most customers use the extra ground clearance more than both axles. Should you long for a Volvo 4×4, you may as well opt for the proper stuff – XC60 or XC90 won’t be far away in the showrooms.

The little off-roading we did was restricted to some farm tracks with random potholes and a few ditches, all of which the V40 Cross Country conquered with ease. A bit of rain and mud didn’t stop it either so the butch V40 should get quite far if driven sensibly, its extra height giving you more confidence to explore.

And if that confidence is a measure of this niche, then the Cross Country is another winner. False confidence or not, every time the weather looked menacing or the trip included unknown terrain, my better half and I made a beeline for the Volvo. To some degree, these decisions were also influenced by its D4 engine.

Available with T4 or T5 turbo-petrol, D3 or D4 turbo-diesel engines, the Cross Country is also offered in V40’s three equipment lines – Essential, Excel or Elite – with only the T4 available as a six-speed manual. All other models are shipped with the six-speed Geartronic automatic transmission.

Our D4 test model’s 2-litre five-cylinder turbo-diesel, lovingly christened D5204T4, develops maximums of 130kW (177hp) or 400Nm in a typically-Volvo, smooth, seamless manner while claiming averages of 5.2L/100km and 137g CO2/km. It even has a naughty five-cylinder undertone when given some carrots.

Dangle them long enough and it’ll reach 100km/h in 8.3 seconds or eventually display 210km/h on one of the three themes offered by its half-digital instrument panel. The rest of the V40’s cabin is a cosy, clean and modern affair with very comfortable furniture.

Grouped at the bottom of the minimalist floating centre console were a few buttons for optional driver aids, over and above advanced stability control and City Safety. The automated parallel park and parking sensors worked flawlessly while other items like lane assist and radar cruise control occasionally annoyed us.

At least the nanny systems are selectable and two failed Bluetooth connections were solved by restarting the car. The rest of the time, our Cross Country didn’t put a foot wrong and just like all the other V40’s we’ve had on test, drew a lot of inquisitive attention and got all our thumbs up.

So do you really need the quasi-off-road bits on your V40? I’ll leave that decision up to you but I can report that they don’t compromise the car’s exquisite road manners. And with prices ranging from N$323,200 to N$425,200, the Cross Country even offers great value. Maybe niche cars aren’t so bad after all.

Maybe niche cars aren’t so bad after all.