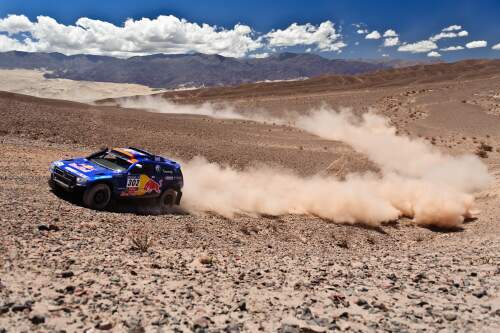 On a sunny Sunday afternoon in mid-January this year, the world’s toughest rally concluded in Buenos Aires, Argentina. The 2011 (and 32nd) Dakar rally concluded after 13 gruelling stages through Argentina and Chile’s amazing but demanding scenery.

A total of 407 teams entered the event, comprising 200 motorbikes and quads, 140 cars and 67 trucks. With 203 eventual finishers, the 2011 Dakar took its toll on exactly half of all entrants and proved why it’s renowned as the toughest rally for teams and machines.

Total race distance was about 9,500km of which about 5,000km were timed special stages. The former “Paris-Dakar” rally-raid race was started in 1978 by Frenchman Thierry Sabine, who tragically passed away in a helicopter crash on the 1986 event.

After security threats saw the 2008 Dakar being cancelled, event organisers decided to hold the spectacle in South America from 2009 onwards. Despite still being called the Dakar, the rally met up with unexpected enthusiasm and fantastic support from the local population.

Anyone can enter the Dakar and it is estimated that privateers make up about 80 percent of all entries. Logistics and costs prohibit full coverage of all stages and riders/drivers so we often only see the front-running multi-million dollar works teams on television.

De Villiers played it safe behind his teammates, 2010 winner Carlos Sainz from Spain and Nasser Al-Attiyah from Qatar who battled each other almost throughout the entire event with an epic bumper-to-bumper race in stage 10.

Carlos Sainz had navigational problems and damaged his vehicle which allowed Al-Attiyah and De Villiers to finish the rally ahead of him. American teammate Mark Miller with South African navigator Ralph Pitchford came home in sixth after an accident on stage 2 put them out of contention.

Says 2nd-place winner in the car category, De Villiers: “The Dakar demands great respect and we are proud to have made it on to the podium for the third time in five years. This is a great result for Volkswagen, who once again have proved they are the best team. Congratulations to Nasser on a brilliant race.”

Sandwiched between the Volkswagens in 4th and 5th place were multiple Dakar-winner Stéphane Peterhansel (France) and Krzyzstof Holowczyc (Poland) in their X-Raid BMW X3’s, with another BMW of Ricardo Leal dos Santos (Portugal) coming home in 7th.

The imposing two-wheel-drive Hummer of American Robby Gordon unfortunately retired after trouble on stage 3, Orlando Terranova rolled his X3 on stage 6, followed shortly by the complete destruction of Guerlain Chicherit’s X-Raid Mini Countryman when it rolled during filming for German television.

A South African legend, Alfie Cox (with 8 bike stage wins under his belt), kept his Overdrive Nissan Navara within sight of the top ten but after suffering from overheating issues he and German navigator Jurgen Schröder managed to claw their way back to 18th overall position.

The bike section witnessed the expected battle between Spaniard Marc Coma and fellow KTM rider Cyril Depres from France. Coma took over the lead from Depres on stage 4 and despite close racing returned to Buenos Aires as the eventual winner, 15 minutes and 4 seconds ahead of Depres.

Local heroes included Albert Hintenaus on a KTM 690 Rally who eventually finished 52nd and Iain Stevenson on a similar bike who unfortunately retired on stage 7. My fellow countryman Ingo Waldschmidt from Namibia took his KTM to an impressive 38th place.

The quads section was won by Argentinean Alejandro Patronelli, ahead of fellow Argentinean Sebastian Halpern and Lukasz Laskawiec from Poland, all three on Yamahas. Polaris rider Declerk from France and Argentinean Copetti on another Yamaha made up the top five.

Much like Volkswagen, KTM and Yamaha, the Russian KAMAZ team dominated this year’s podium with four Russians (Vladimir Chagin, Firdaus Kabirov, Eduard Nikolaev and Ilgizar Mardeev) taking top honours. Dutchman Gerard De Rooy withdrew from the rally after hurting his back on stage 1.