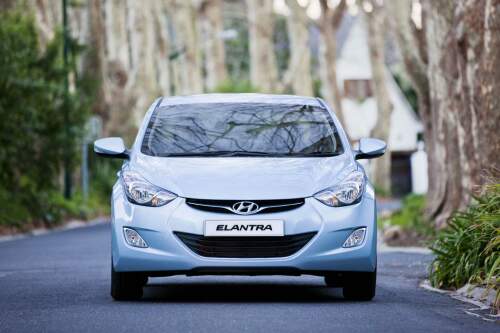 This review may be a little pointless as (a) my boss already wrote a piece on this car, (b) I already published a launch report and (c) I was supposed to test something else; which never arrived. So after a month-long drought of test cars I was so grateful that I decided to write a sneaky review on the new Hyundai Elantra.

For starters, I don’t want to repeat myself too often and will just say this. Hyundais used to be laughable and cheap. They aren’t anymore. Their tech, spec, warranty and pricing combine to make a product that most other manufacturers would like to forget. Preferably after shoving it down a big black hole.

Starting with the ix35 and Sonata, they’re now also good-looking and desirable. Yes, desirable. The Elantra suffers from more of that ‘fluidic sculpture’ design effort but in a good way. It looks amazing, especially next to some of its more boring competitors. Let’s hope the design ages well.

All models are six-speed and front-wheel-driven, the auto shifter using a newly-developed six-speed ‘box. Its ratios are neatly stacked and allow relaxed cruising, registering roughly 1,500rpm at 60km/h and just 2,500rpm at 120km/h in top gear.

The new 1.8L motor replaced a 2.0L unit and while I can’t fault its power or delivery thereof, the gearbox can get annoying. Bless the little monster, it’s probably so excited about its new task that it eagerly shifts gears and often ignores the new engine’s adequate torque reserves.

This is especially evident at highway speeds where you may wish to gently accelerate but the Elantra kicks down a gear and starts growling, then shifts down another cog and starts screaming. What helps against this is a quick shift to the manual gate which, to put it more colloquially, holds that sucka down.

There are a few other niggles, like the shiny plastic rear parcel shelf which reflects and mists up a lot. The sunglass holder, when opened, blocks most of the rear view mirror. Elantra’s fantastic sound system (which looks like a power ranger) immediately befriended my ipod but often skipped to its favourite song after each restart.

Lastly, the Elantra was so smitten with my front passenger that it kept locking her in. The passenger door simply would not open no matter how many times she/we pulled handles, toggled switches, pressed buttons or looked perplexed. The only way out was via the exterior handle.

At this point you’ll surely agree that all these grievances are relatively minor and, with a bit of nit-picking, could be matched by more established competitors. The Elantra’s interior is very roomy and comfy, seems well put together and perks its occupants up with a trendy, flowing design.

The central hang-down section tapers to the top to give long-legged occupants a few valuable centimetres of extra knee room, all controls are clearly marked and easy to operate. And although the steering feels slightly numb on its centre point, the motor refuses to redline and the tyres are noisy, the Elantra is a pleasure to drive.

That longer wheelbase between its beautiful alloy wheels makes for a solid ride which is backed up by a very comfortable suspension. I chucked the car around a few corners and the grip levels were impressive, the ride taught and the brakes easily modulated and fierce when fully deployed.

A family member mistook my test car for a Honda, which, in my opinion, is a very good thing. Someone bemoaned the lack of leather but was eventually convinced by the seats’ funky fabric and good support. Plus, no matter how I drove the Elantra, it was happy with 9L/100km or less.

It has a few minor niggles which I quickly forgave it as I enjoyed my time with the Elantra GLS. It’s a smooth performer with plenty of kit and daring looks at a good price. Here’s a little test I like to give people: imagine another badge on this car and then look at it again. Not too bad, hey?