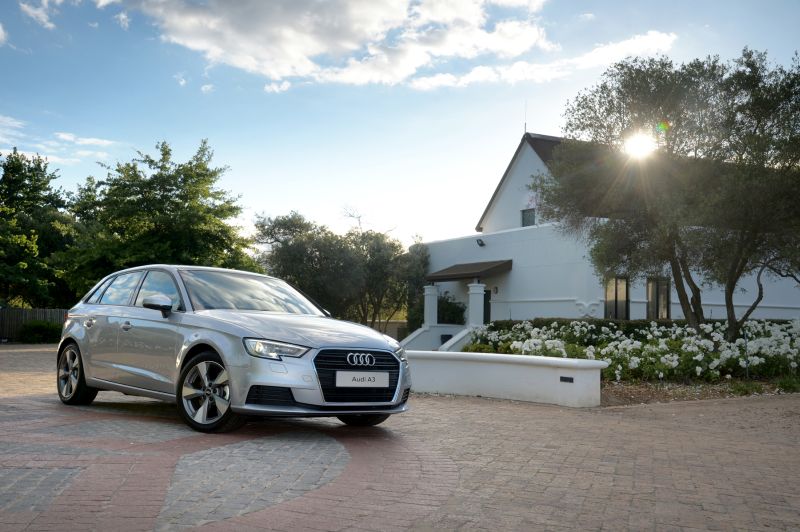 Do you know that saying about not messing with a winning recipe? Yeah, picture the scene at Audi’s headquarters when they were tasked with updating the third generation of their accomplished A3. I imagine a boardroom full of long vacant stares, fly counting, much doodling and plenty of awkward silences.

How DO you improve on a car which is so good that even the dealers don’t want it updated? Well, Audi decided to do what they do best – file away even further and base their perfectionistic improvements on three pillars: cosmetic enhancements, increased efficiency and a dash of new technology.

Already crowned world car of the year 2014, these mild updates will help Audi’s premium A-segment contender to rescue a slumping Africa / Middle East market. On the bright side, A3 enjoys a fair whack of local market segment share through its four body types – 3-door hatch, 5-door Sportback, Sedan and Cabrio.

The drop-top doesn’t account for many sales but Audi nurtures its niche appeal, although declining sales of the 3-door may see that hatchback disappear with gen four. For now, all derivatives benefit from tasteful updates and subtle tweaks; also to catch up to the recently refreshed competition.

Visual enhancements include a wider framed grill with 3D elements in the redesigned front bumper. This sits at the pointy end of the sculpted bonnet and divides a pair of snazzy new headlights. Xenon lighting is standard across the range, LED’s and full “Matrix” LED’s with 64-shade active lighting are optional.

This also means that the front fog lights were *gasp* deleted. What will young men on the N1 use now to attract attention? Anyway. Perhaps they’ll take solace in the five new paint options, rear bumper diffuser or horizontal tail lights. These feature dynamic indicators when LED or Matrix headlights are specified.

The arrival of that technology is a clear indication of how Audi is letting its flagship technology trickle down the range; a trend that continues inside any new A3. Never mind the bulletproof feel and build of each cabin, there’s also been an operating platform update which builds the base for Audi’s latest gadgets.

These optional extras include the marvellous Virtual Cockpit, a highly adaptive and informative digital instrument cluster. It pairs up with Audi’s Connect and many navigation / infotainment options to truly give you that luxurious, cutting-edge feel in your new premium hatchback. And there’s even more…

At the height of their anxious nit-picking, those dudes at Audi HQ decided to give the A3 restyled air vents, new steering wheel and a frameless interior rear-view mirror. Some may consider that desperate but I can guarantee you that my wife will buy any car that has a frameless rear-view mirror. No jokes, she will.

Besides a host of new driver aids (pedestrian detection, active cruise control, rear cross-traffic assist), A3 also gets a revamped engine line-up. A new 1-litre TFSi turbo-petrol 3-cylinder with 85kW replaces the 1.2 four-pot (81kW) while the 1.4 TFSi turbo-petrol 4-cylinder manages to stem 110kW onto the flywheel.

That engine also features active cylinder deactivation which can shut down number two and three cylinders to save you fuel under light loads. The 2-litre TFSi motor makes up to 140kW and uses AVL (Audi Valve Lift), a new technology that actively adjusts the air/fuel mixture depending on engine load.

We drove almost every derivative on the recent launch and while the S3 stuck to my mind like its Quattro performance to the road, the 1.4 TFSi offers a golden medium to the smooth and perky 1-litre. I’d call its power adequate, the consumption exemplary but caution against the hard ride of S-Line / sport pack goodies with big wheels.

All new A3’s are built in Ingolstadt and available in manual or automatic; except the TDi and S3, which are S-tronic (auto) only. For extreme speed freaks, the new RS3 is expected to arrive next year in Sedan (second quarter 2017) or Sportback (fourth quarter) guise. Its 294kW turbo five-pot will be good for 0-100 in just 4.1 seconds!

Like most recent VWAG products, the 2016 Audi A3 range didn’t really need much updating but has been successfully tinkered with in terms of looks, mechanicals and toys. The winning recipe retains its core flavours but has received a tasteful injection of spices.