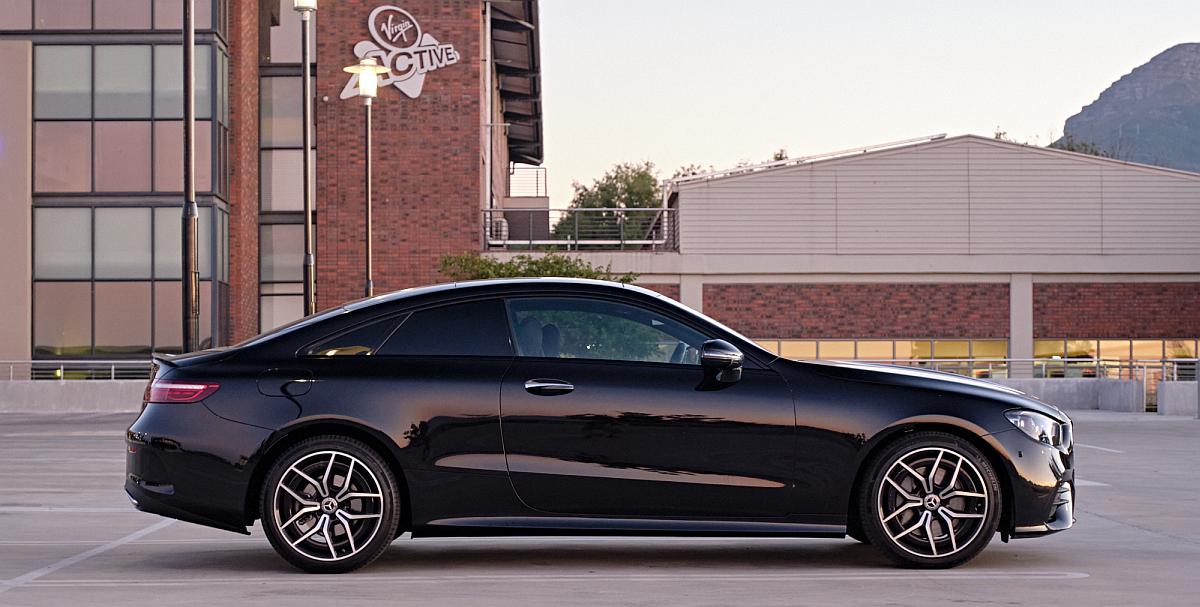 Meet the new Mercedes-Benz E300 Coupé or, as I like to call it, the ultimate automotive ying and yang. Everything that is right and wrong with today’s car world… is perfectly embodied in this automobile.

I don’t know about you but I like to start with the sour bits and get to the sweet stuff later. Bad news before good news. And I will also put up my hand immediately and proclaim that most of my negative observations are deeply rooted in a middle-aged desire to cling to the past; where everything was just better.

Did I type “better”? My apologies, I meant “easier”. 20 years ago we didn’t have keyless entry or start/stop systems, Android Bluetooth or active lane mitigation. The height of technology was remote central locking and maybe climate control. Nowadays you need a software degree to change the ventilation’s temperature, never mind the direction.

Or, as in the case of this E300 two-door, careful voice commands or even touchier multi-zone steering wheel buttons. The operation of these phenomenal gadgets can be as irritating as it is amazing. Touching the wrong button at 120km/h is absolutely infuriating but getting the dashboard lady to phone home is wondrous witchcraft.

Right, grandpa. What else?

The styling. Just take a look at this black beast in front of you. It looks chunky and complicated, yet with an understated aggression in its flowing proportions. See what I mean about ying and yang? Mercedes-Benz somehow managed to make this car look timelessly classy while still serving our desires for modern brashness.

In my humble opinion, the interior is where they swayed more towards a new-age design because classy basics with modern tech have already been trademarked by Volvo. Nope, this Mercedes coupé screams modernity with its turbine air vents, acres of screens and more mood lighting than a bachelor’s penthouse.

Same goes for the operation of its many gadgets, which my dear parents or uncle (who owned multiple Mercedes’ between them) would simply recoil from in utter horror. Bless them, the Stuttgarters did their best by including a few shortcut keys or designing a fairly intuitive infotainment user interface but Mother Dearest just gave it a few blank stares…

Short of letting her drive, I really farmed her initial reactions for this review because they were surprisingly positive. Yes, she wasn’t overly smitten with this vehicle’s aggro looks but delighted in the automatic seat-belt butlers. Glossing over the tech fest, she found the window line too pinched but commended the great parking cameras.

Again, good and bad in one car.

Then there’s this vehicle’s cutting-age power plant. Any self-respecting Mercedes grand tourer should at least have six or eight cylinders (in my book) yet this flashy newbie shows up with a puny 2-litre four cylinder. A four banger! I’ll quickly add that it obviously fails dismally in terms of aural satisfaction but that’s where my critique stops instantly.

This four pot manages to extract up to 190kW or 370Nm, no thanks to the help of modern technologies like high pressure injection, turbo-chargers and mild hybrid systems. This sort of fire power was reserved for the aforementioned big sixes or small V8’s of my youth… except that they were slower, dirtier and much thirstier.

Mercedes-Benz alleges 0-100km/h in 6.4 seconds and the obligatory limited top speed of 250km/h. Our best 0-100 attempt yielded a very impressive 6.14 seconds with plenty of aggression in all-out Sport+ mode. A single emergency brake stop simulation was over in a staggering 2.61 seconds and 35.81 metres.

Trust me, this is probably one of thee most amazing parts about this car: with nine ratios in a lightning-fast transmission, and north of 250 horsepower on tap almost instantly, this car will wipe the floor with any old Benz when it comes to performance, emissions or economy. Longevity? Well, there’s that flipside again…

I’d like to think that in 30 years’ time, we’ll look back on this car and proclaim it to be simple and easy to live with. Because that’s what we’ve always done and – Mercedes EQ series incoming – probably will do for the foreseeable future. Each E300 is sold with a 2-year warranty and 5-year/100,000km service plan.