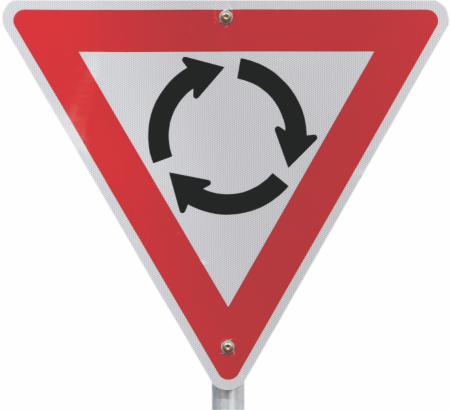 Traffic circles (other nations also call them “roundabouts”) are a very simple and effective type of road intersection. Instead of using stop signs or traffic lights, these intersections generally allow a higher number of vehicles to pass through at a faster rate.

The many benefits of using traffic circles include:

Correct use of a traffic circle (for left-side traffic):

The general rule of a (big) traffic circle is that entering vehicles have to yield to traffic from the right and anyone already in the circle.

Mini-circles are similar to four-way stops and have different signage (see photo) before said intersection. Here you must yield to anyone who’s crossed their yield line before you.

Even if you are confident about the circle’s use, other people may not and thus it is advised to reduce your speed and employ common sense when approaching.

Yield to circle traffic, be as courteous and aware as possible and always indicate your intention in the automotive merry-go-round!

As traffic circles have multiple approaches, departures and inner lanes, make sure you follow the correct lane well ahead of entering or leaving the circle. Keep an eye on traffic around you and remember that large vehicles may need extra space (and part of your lane) to turn.

Another advantage of traffic circles is that you can simply go around again if you’ve missed your exit; plus they look cool on Google Earth. So, to recap, here’s how to use a traffic circle: