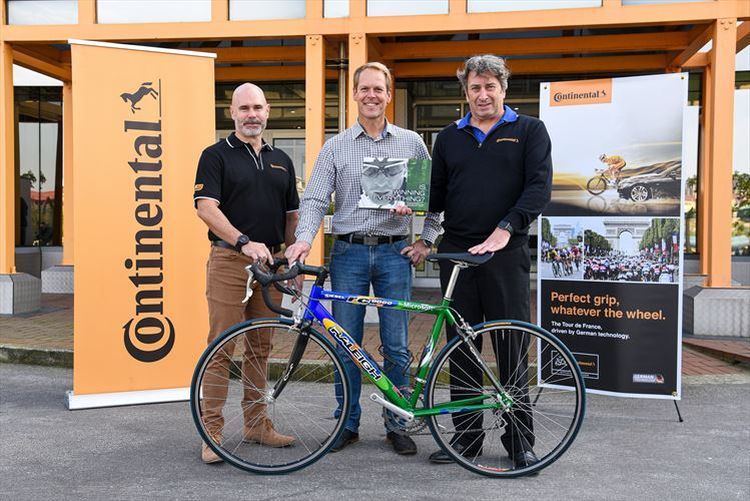 “Presenting Malcolm Lange’s 2002 bicycle, which was originally co-sponsored by Continental and still has its race-winning Ultra 3000 tyres fitted, to Continental Tyre SA is an opportunity to acknowledge the tyre company’s exceptional support and sponsorship of the club for the past four years,” says Fat Tracks chairman, Andrew Rist.

The locally designed and developed Raleigh RC9000 Series bicycle was ridden by Lange as part of the Microsoft South Africa professional road racing team, with its distinctive blue and green colour scheme being a popular sight at the time. It has been in the hands of veteran cyclist and Fat Tracks founding member Robbie Powell for several years, after he worked with the ProBike team that developed this bicycle for Raleigh.

Lange’s remarkable professional road racing career spanned 20 years, from 1991 to 2011. He claimed an astonishing 409 local and international race victories, making him one of South Africa’s most prolific and successful riders and sportsmen. He won the SA National Road Race Championships three times, claimed the National Time Trial Championship twice and represented South Africa at the 1992 Summer Olympic Games in Barcelona at the age of 18.

“Continental’s extensive involvement in local cycling has been a major catalyst for the growth of the club and cycling in general in Port Elizabeth, and it is fitting that one of Malcolm’s bicycles that he raced in 2002 will take pride of place at the company’s head office and factory in the city.”

With the support and sponsorship of Continental Tyre SA, Fat Tracks has developed and maintains around 37 km of world-class mountain bike trails in and around Port Elizabeth, giving riders of all ages and experience levels access to some of the best riding routes in the country. This includes the popular and wide variety of trails located in the heart of the city in the scenic Baakens Valley.

“Becoming involved at Crazy Dave’s brings another dimension of rider development to the area which compliments our existing trails, and is sure to benefit all mountain bikers, especially the yougsters,” says Rist. “The proximity and variety of trails that are afforded through the Baakens Valley, 3 Rivers, Norm Hudlin and Crazy Dave’s is a spoil for Port Elizabeth, and the rapid growth in local mountain biking proves this.”

Since Continental came on board as the club’s main sponsor, the membership has grown from around 240 to over 900, with members receiving an impressive range of discounts and benefits from partner stores and restaurants in Port Elizabeth.

“It is hoped that both the club’s growth and general increase in local mountain biking continues the positive trend, and further bolsters the city’s image of being very active and shaping the nature of the sport,” he adds.

Fat Tracks and Continental co-sponsor some of the region’s most popular mountain bike races, including the country’s oldest race, the Steeltek, the fantastic single track of the Hayterdale Classic and the annual CycloPro Longmore Classic which takes place this year on 1 December.

Continental has also been the co-sponsor of The Herald Continental Cycle Tour for the past three years, helping to make it one of South Africa’s premier cycling events featuring mountain bike, team relay and road races for all ages, spread over two weekends. The 2019 event, which was the 34th edition, hosted over 3 000 cyclists.

“It is a true honour to receive this historic bicycle from the Fat Tracks MTB Club,” says Shaun Uys, managing director of Continental Tyre SA. “It is a privilege for Continental to be involved with such a dynamic and pioneering club, and to help promote and develop the sport of cycling. It also helps put Nelson Mandela Bay and Port Elizabeth on the map as one of the country’s best adventure sport and cycling destinations, while promoting the outstanding qualities of our extensive tyre range which caters for everything from bicycles to family cars, 4x4s, trucks and even motorcycles.”

Internationally, Continental has a proud legacy in all forms of cycling. In 2018, Continental signed a five-year deal to become an official partner of the Tour de France, and upgraded its sponsorship to Main Partner for the 2019 event.

Six World Tour teams (Sky, FDJ, Movistar, Bahrain-Merida, Katusha-Alpecin, Sunweb) will be racing on the high-end Continental Competition Pro LTD tyre specially designed and hand-made in Korbach, Germany, when the race starts in Brussels on 6 July this year. In addition, drivers of the official vehicles of the Tour de France will get to savour the performance of the latest Continental car tyre, the PremiumContact 6, which is manufactured in Sarreguemines, France.