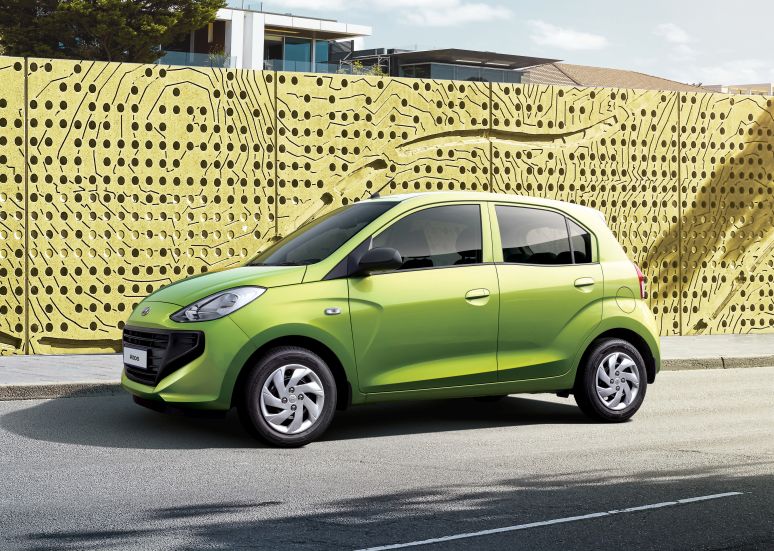 Second-hand Vivo or Figo. That’s usually my answer when someone asks what they should buy for their graduating child or retiring parent. When they counter with affordable new cars, I often have the devil’s own job explaining why they shouldn’t buy a cheapy for Junior or Ouma. That is, until now…

You see, around the price bracket of used Polos and Fiestas we have a couple of oven-fresh contenders whose shoddy quality and lack of essential items are only overpowered by the smell of glue. And, as recent sales statistics prove, all of that is of absolutely no concern to a large slice of our car-buying population.

They’d rather have nasty new than sensible second-hand.

The psychology behind such thinking must be overwhelming but Hyundai South Africa has finally – hopefully – given even the most desperate new-car lovers a viable alternative. “Old friend, new face” someone commented at my local cars and coffee when I reported about my recent attendance of the 2019 Atos media launch.

Our old friend, the previous Atos, was sold here from 2005 to 2013… it wasn’t much to write in a column about but it got the recipe right. Small dimensions, friendly price, inoffensive styling and the minimum amount of modern amenities ensured that it sold just over 45,000 times in southern Africa.

Its round shape found equal favour with young buyers (even petrol-heads in KZN) and little old ladies alike; complete with automatic gearbox option. That model was eventually replaced by the similarly compact but decidedly more refined Hyundai i10, which enjoyed quite a bit attention from local buyers until sales seized a few years ago.

Again, the bigger and better Grand i10 was left holding Hyundai’s entry-level baton but asking prices had also crept up; in relation to size. Personally, I found that a bit bizarre. Southern Africa is hungry for affordable vehicles and Hyundai S.A. is one of the most dynamic, pro-active, market-focussed car companies I know.

They listen to their dealer network and take good care of the customers… so how could they leave such a vast area of the market unoccupied? Irrespective of what the reasons may be, their answer is finally here in the 3.61m long shape of this brand-new Atos.

The only thing missing at the moment is an automatic version.

All of this is powered by a 1,086cc in-line four-cylinder petrol engine sending up to 50kW (68hp) or 99Nm to the front wheels via a five-speed manual gearbox. The power plant has a fairly high compression ratio of 10.1:1 but uses a single overhead camshaft and 3-valves-per-cylinder driven by a single cam-belt.

Does that sound complicated? It isn’t, actually.

That layout spells simplicity, reliability and cost-saving in equal measures. The most intricate system on this engine is probably its multi-point electronic fuel injection. With about 78 hp per ton, performance isn’t electrifying with a claimed 0-100km/h sprint time of 14.4 seconds and a top speed of 155km/h.

I can confirm an occasional reluctance to gain momentum after our lengthy drive around the Cape peninsula in early November. The colourful fleet of Atos’ were still in three-digit mileage readings but every driver noted a lack of torque on gradients, at highway speeds, with extra load and/or in its upper gear ratios.

The answer is stock-standard city car flair: rev the nuts and bolts off this little critter if you have to. Given lots of berries – and with a bit of forward planning – my co-driver and I quite enjoyed our time behind the snazzy multi-function wheel (with Audio and Bluetooth buttons) of our “Fiery Red” Atos 1.1 Motion M/T.

As for styling, I’ll leave that up to you but wanted to point out a few design observations. One: the rear bumper looks like a moustache. Two: cheap car buyers care more about price than looks. And three: even with styled silver hubcaps and a bare minimum of lights or chrome, the Atos looks decent and modern.

Better than the old one. Or Honda’s Brio.

Occupant safety is taken care of by two front airbags, ABS (anti-lock) brakes and EBD – electronic brake-force distribution. The Atos has no electronic traction or stability control but, barring extreme manoeuvres at high speeds, this bare minimum of safety nets should be sufficient.

Its basic suspension provides good damping around town, no thanks to high sidewalls on the Hankook tyres, but the ride can get choppy due to the short wheelbase (2.4m) and rudimentary rear setup. This also houses drums instead of brake discs and points towards the car’s single or dual-user purpose. As do the rear manual windows.

Before I end off, we also noted a cooperative clutch pedal, nippy handling in parking garages and a funky interior at this price point. The Atos cabin is marked by stylish fabrics, well-grained plastics, clean instrumentation with small board computer, odd power window switch positions, simple ventilation and A/C controls, as well as a cool touch-screen media system.

See what I mean about them listening to the market?

Some competitors don’t offer such infotainment options while in others it’s the only redeeming feature. Not the Atos, though. Hyundai is certainly on a winning ticket with the combination of good engineering, great specs and build quality, excellent warranty and tiny service plan, never mind the price of just R159,900.

That puts it slap-bang in between the questionable “cheapies” and some more established rivals who charge extra for niceties. Those two used-car champions, the VW Polo Vivo and Ford Figo, start new at almost 200k which means that, besides a brand-new Atos, they’ll soon have another huge rival to contend with.