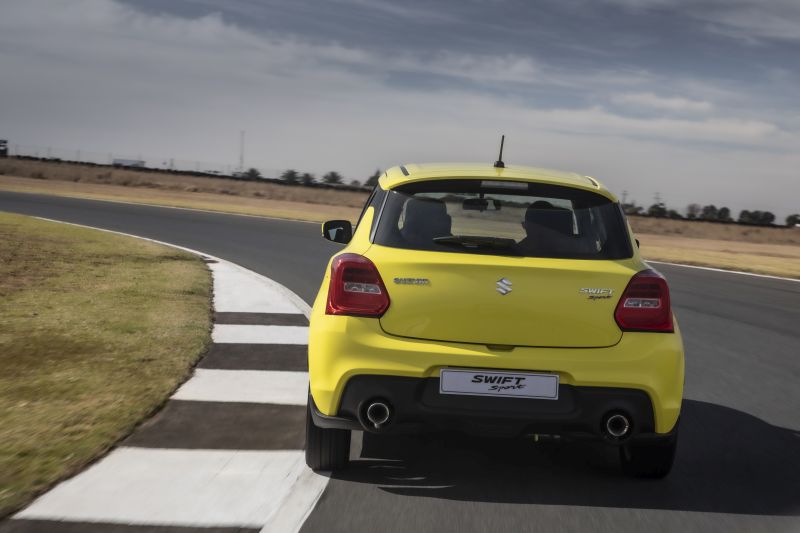 I’ve just returned from an exciting Suzuki launch at Redstar Raceway in eastern Gauteng. This tyre-shredding day celebrated the arrival of the Japanese brand’s “Boosterjet” turbocharger technology in the agile Swift Sport and popular Vitara models.

“Finally,” I hear you and most of my fellow journalists whine, “why did it take them so long to bring turbo power to these cars?” Suzuki will quote many reasons but I like to think that they simply didn’t see a need for it until now because they had to catch up to the down-sizing and turbo-charging brigade.

I still champion naturally-aspirated engines as a sensible choice for budget-conscious motorists and long-term owners because there’s potentially less to go wrong; hence they’re easier on your pocket. That also goes for fuel consumption because every turbo motor needs more juice to make more power.

And unless you’re a complete bore, you’ll use that extra potential more often.

The upside of a turbocharged car – to rationalise Suzuki’s move – is to be found on the various hills leading up to my home. Most free-breathing engines need some extra encouragement or gear changes to conquer those inclines while turbochargers – even small ones – blast upwards on a tsunami wave of mid-range torque.

Thanks to their mid-range clout, turbos are more usable in everyday traffic.

When it comes to the Suzuki Swift Sport, the purists may agree to disagree. They will argue that the whole point of the first ‘Sport was to wring its neck whenever an opportunity presented itself. Like, say, a homeward hill. That car was born in 2005 but only sold in S.A. in 2010/2011 with two doors and a limited run of 100 units.

Beyond the compromise of its body shape, the SSS also scared off jaded commuters with a choppy ride and revvy engine which yodelled in just five gear ratios. The 1.6L engine “only” made 97kW (132hp) but its non-turbo response and 7,000rpm redline gave it an extremely lively and exciting character.

Trust me on that, because I actually owned one. It was red and number 56 of 100.

Generation Two came along in 2012 and sold exactly 777 units in southern Africa. Additional to being non-limited, its success came from fixing the main issues of its predecessor: the 2nd Swift Sport had more doors, actual suspension, better kit and a marginally more powerful engine which still sent the tach needle to seven.

Suzuki’s press release quotes Colin Chapman’s mantra as one of their main goals; and rightfully so. The man behind Lotus sports cars was dedicated to making cars as light as possible and in today’s world of bigger, fatter and heavier cars the Swift Sport is a beacon of hope because it shed weight with each generation.

This gen-three car lost a whopping 90kg for a total weight of 970kg. Also sporting trick direct fuel injection, the spanking-new K14C Boosterjet engine delivers maximums of 103kW (140hp) or 230Nm which may not sound impressive but puts this sporty Swift in the illustrious > 100kW-per-ton power to weight club.

In plain English that means it’s fast and nimble.

Some of those are Suzuki’s own words and they – again, rightfully – even took a stab at hot hatches which have become over-powered and blunt. As a former SSS owner and participant in many track events at the recent launch, I can attest to that being absolutely true. The new Sport is exciting and rewarding to drive.

Another novelty is the introduction of a six-speed automatic gearbox with steering-mounted shift paddles. While obviously not as involving around Redstar’s tight bends, the auto’box has well-spaced ratios and fairly fast shifts to please sporting drivers and anyone with an unavoidable need to commute on a regular basis.

Perhaps less so, but equally important, is the introduction of the same 1.4L turbo engine to Suzuki’s rather more frumpy Vitara compact SUV. This accomplished product can trace its origins to 1988 and maintains the brand’s honour with good value, great specifications and reliability. Its 1.6L engine was just a bit pap.

Enter stage left, the new turbo-charged Vitara. It not only displayed its fresh zest in drag race competitions at the track but also surprised me with newfound torque at highway cruising speeds. No more stirring in the gearbox, no more dents under the accelerator, the Vitara Turbo finally has some torque to spare.

And remember, Redstar is at reef altitude.

The addition of this new flagship model coincides with a mild mid-life facelift for the Vitara range with its (optional) black or white contrast roof. In this guise, the K14C engine delivers slightly less torque (220Nm) than Swift Sport (230Nm) but over a wider and more usable range – 1,500 to 4,000rpm vs. the Sport’s peaky 2,500 to 3,500rpm.

Leaning on the already-impressive GLX specifications, Vitara Turbo also gets restyled bumpers and cool 17-inch alloys, LED lights and a touchy-feely infotainment system with smartphone capabilities. All-them safety items (like seven airbags) are present and the funky SUV is still available in a choice of vibrant colours.

The same amazing warranties and service plan, part of Suzuki Complete after-sales care, also apply to all the Vitara models. So what does all this fun cost, I hear you ask? Well, the new Suzuki Swift Sport comes in at around R316,000 and the auto-version costs 20 grand more. Vitara Turbo manual costs about R380,000 while the 6AT is just below 400k.

The Vitara most certainly did, it’s transformed this compact SUV into an even more competitive product. Suzuki also removed the less popular AllGrip (4×4) derivatives but left the affordable (and arguably simpler) 1.6L models intact. No wonder this brand is climbing our sales charts, breaking records and raking in awards along the way.

Swift Sport is a different animal. As a former owner and avid disciple of the predecessors, I lament the loss of their motorbike-like character… that immediacy and high-revving urgency. However, Suzuki built a very refined, more usable and very nimble pocket rocket which gives its rivals a blue eye or two – at the lights, the pumps and the till.