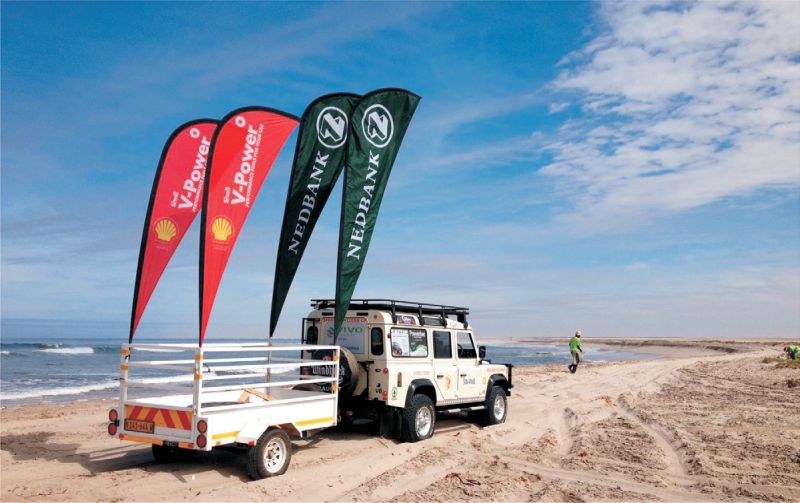 In a previous edition, we told you about an amazing local initiative to clean up beaches around the Henties Bay area. NamWheels recently chatted to the main man behind the clean-up and he shared the following with us:

“We started just after 9AM on the morning of 15 December at the Henties’ municipality offices with the town area, North and South dune. The rest of the +/- 120km beach area was covered during the following two weeks.”

“The last day of the clean-up started on 1 January 2016 at 07h15 in the morning; after the new year’s celebrations in the Omaruru river. We ran around like ants collecting the many ‘casualties’ of the previous night’s parties… and yip, some party animals were still going strong!”

In total about 2,570kg was picked up this year.

Yet again, a special thanks goes to the MD of Powerbat / SWANIB Cable, Johan Le Roux, as well as Anna-Marie, the B2B manager at VIVO
Energy (SHELL), for their personal involvement with the clean-up.

“Without you guys I would still be on the beach… and also to “Ouma en Oupa” for their support – thank you very much!”

“The biggest THANK YOU goes to our sponsors for making this possible and such a big success, without you this would not be possible.”

“I’d also like to give a special thanks to the public for your support on the beach during the clean-up days. Your words of appreciation to the guys walking long distances in the hot sun – that is why we do this, to create a better Namibia for all and make it the cleanest country in Africa.”

See you again in December!