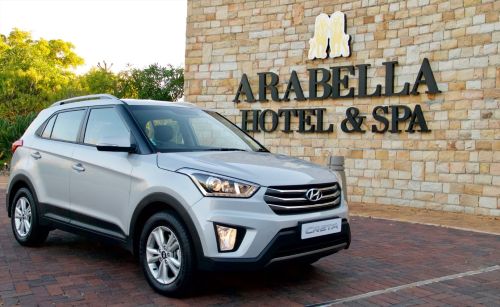 On 23/24 February Galimoto Media checked into the Arabella Hotel & Spa, Kleinmond for what was to be the launch of the all-new Hyundai Creta. Promised to be an exciting two days and getting to know Hyundai’s new creation, we were given some alone time with the vehicles to formulate our opinions.

The Creta (the name derived from the Greek Island, Crete) follows in the footsteps of the mid-sized SUV, the Tucson and the much larger, Santa Fe. It also stands to be the smallest SUV under the Hyundai brand, competing with the likes of the Renault Kajar, Honda HR-V, Mazda CX-3 and Nissan Qashqai.

Being introduced the Creta the previous day, groups of two were assigned to either a petrol or diesel version, with a trade due at the halfway mark (50km). The route would take us to the Regional roads from Kleinmond, Botrivier, near-Grabouw and back to Kleinmond, with well-groomed gravel roads and the more feared “sinkplaat” roads thrown into the mix, just to indicate what the Creta is capable of.

The verdict was in and after 100km we were already able to form a general consensus between all of the media. What Hyundai has done, was to create a very capable small SUV, able to navigate within the tight inner city boundaries as well as to change into ‘Narnia’s closet’ during the occasional 2000km (+) road trip, weekend Xterra-events or the monthly shopping trips.

With more than 400 litres of boot space and even more, if the rear seats are folded down (considering that 6 ft individuals can sit comfortably on the rear seats), the small and cute Creta can transform into a black hole.

Bang for the buck

Taking it out on the road proved to be a pleasure with the steering being responsive and lite. Gear shifts seem to be rapid and soft. More crucially is, however, the suspension which has been redesigned to be called a McPherson strut. This I-shaped front sub-frame is said to absorb the shock even better. Driving with tyres brimming at 2.3 bars, the Creta had little struggle with the worsening gravel roads. It has to be taken into account that the lighter Creta will be more bouncy than the heavier Tucson, but shouldn’t give you a headache if the tyre pressure is dropped to 2 bars.

Road noise is minimal, with only the occasional noise of a wakening engine when the right pedal is pushed to the floor. A short gear ratio provides for a constant revolution of around 2 500 rpm, low enough to keep the ears and the fuel economy happy.

A joy to drive

Our readers will, unfortunately, have to wait for a more thorough test in order for us to provide details on fuel economy and other driver qualities, but it has to be said that the Creta already has a soft spot for us. Performing outstandingly on all surfaces and proving to be effective and practical, the Creta may just be Hyundai’s best SUV of 2016/2017.