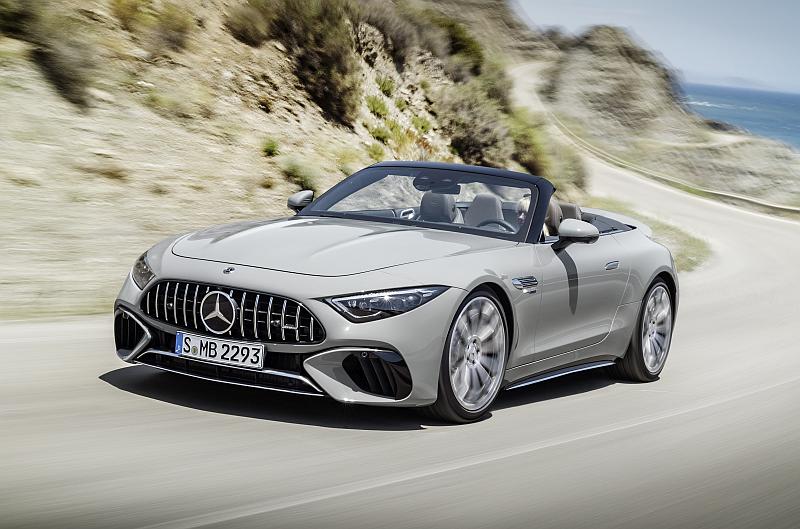 Mercedes-Benz just introduced the seventh generation of their legendary SL roadster, but now the name includes those three magic letters A, M and G. This brand-new SL also bears a remarkable resemblance to an AMG GT Roadster…

So what is this collaboration for? Who’s copying who here? Mercedes-Benz certainly invented the sporty-and-light (“SL”) nomenclature in the fifties but those multiple generations of convertible roadsters didn’t always follow that recipe with distinction. I like to think they asked AMG for help with the following points…

That is debatable, especially if you equate sportiness to power. For the SL has always been shipped with beefy engines which – if we ignore the dainty 190SL – never dipped below six in the cylinder count. Most of them weren’t razor-sharp sports cars but still passed as sporty and powerful tourers in their respective eras.

Again, low masses and nippy handling only apply to the SL if you measure it against contemporary heavyweights. Like yank tanks. The last few decades of the previous millennium weren’t spent shaving grams off spec sheets, they were dedicated to sturdy drive trains and the trademark Mercedes door thunk.

Nope, the “SL” badge took on a different meaning many years ago. It stands for sophistication, power and luxury; all rolled into one beautiful shape. In fact, I defy you to name an ugly Mercedes SL. Or better still, try to name the least attractive generation. Which is equivalent to asking for the least attractive swimsuit model.

Every generation of the SL was a looker, and as befits a true icon, their appeal (and market value) increases exponentially as you move back in time. The flagship Mercedes roadster has also been a technological pioneer and introduced many nifty features to luxury open-top motoring.

This new one is no exception. Be it the state-of-the-art infotainment system with large multi-angle touch screen, the extremely potent 4L Bi-Turbo Petrol V8 AMG engine or intricate body construction, this R232 series is a ground-up design of the most iconic convertible car in the world.

The new SL’s exterior attire is just as striking, and while critics are right in identifying the bigger AMG GT in some of its rear angles, this new vehicle cuts an extremely dashing figure. Like many generations before it, this vehicle exudes just the right amount of menacing attitude mixed with a good dose of timeless elegance.

When compared to its predecessor, the headlines are as follows. A faster and lighter fabric roof replaces the intricate metal origami which graced the two preceding (R231 and R230) models. Mercedes has thus re-introduced two rear seats which, as last seen in the 90’s soft-top R129 series, are for occasional use only.

In keeping with the time, this R232 model is prepared for an EU-dictated electric future so it’s ready for EV / plug-in / hybrid technology. At the time of its digital launch, the SL55 and SL63 models were mild hybrid models with varying power outputs: 469hp vs 577hp.

A friendly contact from Germany confirmed that Namibia would most likely get the 55 derivative from mid-2022 onwards, with other models to be confirmed at a later stage. The best way to establish available colour, trim or feature options would be to contact your nearest dealer.

Let’s sum up with that connection to AMG. Mercedes deliberately wanted the car to be sportier, so that was the natural route to take. And with the popularity of AMG models – not just within the SL ranges – it made sense to drop the normal derivatives and rather work on more distinct versions of this new roadster.

Right now, the Mercedes-AMG SL55 and SL63 are what the market craves and aim to please its buyers with striking designs, sumptuous interiors, the latest gadgets and plenty of fire power. And if you look back at the six generations of SL that came before this one, that statement rings true for every single one.