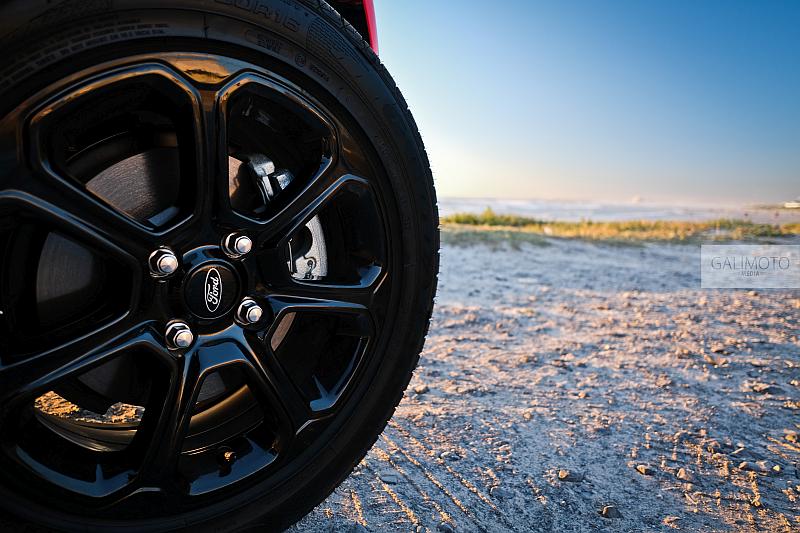 Well, apart from not being economic nor sporty, what you are looking at here is Deadpool’s secret compact SUV. No, seriously, it is black and red. Even with its very small size, this specific model can be seen from quite a distance...

Ok, let’s backtrack to the economy and sportiness. We made quite a strong statement there…

Yes. Although the EcoSport is a firm Southern African favourite and probable one of the cars, which initially started the compact SUV revolution, the EcoSport is neither economic, nor sporty as it drop it’s 8.6 litre / 100km figure at any point during our test (which included urban- and open road commuting). That’s quite heavy for such a small car and should only be capable of reaching 500km on a full tank.

Secondly, the 1.5 litre, 3-cylinder engine is capable of holding its own at 120km/h, but with 91kW and 151Nm, can become quite loud and somewhat sluggish, when asked to overtake traffic. The six-speed automatic gearbox also sometimes feels ‘asleep’ when asked to downshift.

During our Racelogic speed runs earlier in 2021, the Ford EcoSport 1.5 Auto Ambiente (which the Black edition is based on) reached the 0-100km/h test in 11,57 seconds and 120km/h in 17.07 seconds. This has to be said, is on par with the majority of the competition in this segment.

Right, what about the rest of the car?

Well, firstly, the 205mm ground clearance certainly helps the EcoSport to be quite nifty on gravel surfaces. Yet, this in turn also makes for a somewhat wobbly drive on the fast open road and gravel sections. Again, it has to be said that the EcoSport is relatively more stable than most of its segment rivals.

The EcoSport has always been a hot seller due to its small size, and small turning radius, yet adequate seating space and luggage room. Again, the EcoSport stands strong against its rivals as it provides enough rear legroom and 333 litres of luggage room. Fold down the rear seats and there will certainly be enough space to fit a bicycle with both wheels detached.

Although this car might seem very small, compared to its competitors, the EcoSport is actually on average, about 300mm longer, although slightly shorter in width and taller in hight. This, together with the 20mm average higher ground clearance might cause a ‘waving’ feeling in strong winds or at high speed.

At R336 900 (with a 120 000km/ 4-year warranty and 3-year / unlimited distance roadside assistance), the Black edition might be stiffly priced, compared to its equivalent competitors and whereas the EcoSport range starts at R303 900, other manufacturers start their range prices at the R240 000 mark.

Because the Black edition (with a black finish grille, front skid plate, roof and integrated rails and black bonnet, and door decals) is based on the Ambiente, features inside are also scarcer, compared to competitors.

Whereas other manufacturers now fit 7-inch or larger (Apple CarPlay and Android Auto capable) touchscreens, the EcoSport only has a simplistic 4.2 infotainment screen with two USB pots and six speakers.

However, the EcoSport certainly wins when it comes to safety. It houses six airbags, ISOfix points on the rear seats, electronic stability control and traction control.

The EcoSport might have been with us for just more than 10 years and might be lagging in terms of a modern design, but there is certainly a good reason as to why this product is so popular.

Not only is it small and nifty for tight urban spaces, but also practical and safe as well.