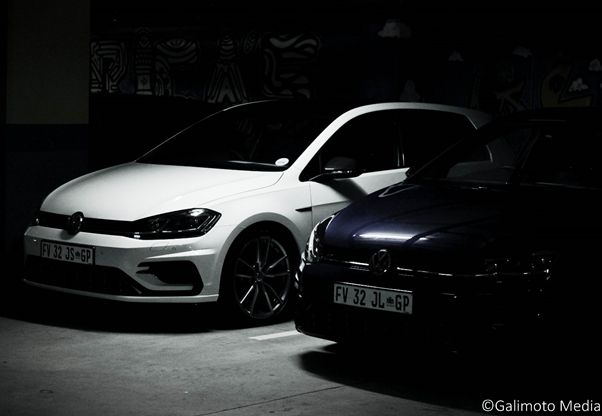 The best of both worlds

A few months ago, we had the privilege of testing the new Volkswagen Golf GTi 7.5. On the open roads to Graaff-Reinet, this proved to be one of the best cars that we have tested in a while and we really struggled to find any faults with it. Southern Africa is renowned for the highest percentage of GTi’s. In fact, over 350 000 GTi’s have been sold in the region ever since it started with the MK1. Now it is the turn of the Golf R and the Golf GTD to make a trip to our local showrooms and once again, Volkswagen gave us a little taste of what to expect.

The Golf R has been in South Africa for quite a while and although not being in the same demand as the GTi, the two make up 60% of all Golf sales in the country.  With the Golf R being the most powerful in the range, it is also the most expensive. It has to be said that previous R models were also “race ready” and thus not well suited to the South-African roads.

Having 44 more kW (213 kW) and 30 Nm more torque (380 Nm) than the GTi, the R definitely stays firm as the most powerful Golf. In fact, it will reach the 100 km/h mark 1.8 sec faster than the GTi (0-100 km/h in 4.6 sec) and have more grip on the road as it comes standard with the 4Motion all-wheel drive system (the GTi only has two-wheel front drive). The 7-speed DSG also makes no effort in reaching the top speed or “passing” traffic on the longer roads. It has to be said that the all-wheel-drive does bring with it an additional 100kg, making it a bit heavier in the corners, yet provides, even more, fun than the GTi as it slingshots out of corners with the power being sent to the wheels which needs it most.

Soft on the eyes, the Golf R looks striking. Ready for action, yet appealing enough to drive into the driveway of your in-laws. With newly designed bumpers, LED head- and taillights, wider tailpipes (4 to be exact) and then the 19-inch Pretoria alloy wheels, cater for an appealing look.

Inside, the Golf R houses a 9.2-inch infotainment system (with gesture control), the Active info display (behind the steering wheel) and a panoramic sunroof.

Although the Golf R might be pleasant to look at and nice to sit in, with the front bucket seats holding you like a warm and round father Christmas, our real interest were focused on the driveability of the new R.

It has to be mentioned that South-African roads, in general, do not cater for sporty hatchbacks. This is the main reason for the demand in SUV’s. With this in mind, we took to the back-roads of Grabouw and Villiersdorp. The Adaptive chassis control helps the driver to choose more sporty or comfortable suspension.

At first, we tried the ‘sporty’ setting. Perfect for the Autobahn, this setting might not be well-suited to the bumpy R-roads in SA. Yet, changing the suspension to ‘Individual’ and ‘comfort’, makes a complete difference in the comfortability of the car. Like the GTi, the R will sail over the tar roads, but at times remind you of its sportiness, especially when those low-profile Pirellis stick to the tar in bumpy corners.

The GTD looks very similar to the new GTi, with only minor design differences on the front headlights, radiator grille and dual tailpipes on the left. It carries the same interior design as the GTi and is also fitted with LED daytime running lights.

The biggest difference between the GTD and GTi, is the power delivery. Although Volkswagen state that these two should not be compared, many will do so, hence the similarity in the name.

This definitely makes the GTD much more comfortable, should you decide to decide to take it around the corners, a bit vigorously.

South-Africans have waited a long time for this, and with good reason. The GTD definitely proves to be one of the most efficient and practical diesel powered hatchbacks on the market. What Volkswagen has done is to bring a perfect car, perfectly suited to the South-African roads, rather than yet another petrol-power house that we are not able to fully use on our roads. The GTD will be the perfect companion for the longer roads, where power and fuel efficiency are two of the contradicting factors. The GTD combines these two, effortlessly.

The Golf R, although being down on power compared to its rivals, might be slower in a straight-line, yet performs much better through corners thanks to its all-wheel drive system. Inside, like the GTD it feels exclusive, sporty, yet conservative. In terms of technology, handling and pure driving pleasure, it has to be said that the Golf R definitely wins.

All the new Golfs comes with a 5-year/90 000km service plan and 3-year/120 000 warranty. Again, Volkswagen managed to expand their philosophy of sportiness, combined with driver comfort and practicality.