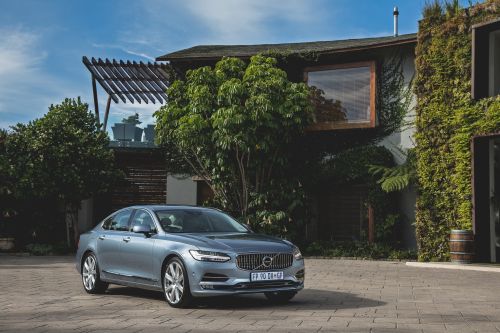 I’m starting to feel like a broken record but am happy to repeat this joyful tale as often as necessary… Volvo went from a bleak future to new ownership (Geely) and superb products. After the 40 and 60 Series, the Swedes tackled their XC90 and reinvented a whole range – this new S90 sedan is part of that.

We’ve already met and tested the impressive XC90, which also happens to be South Africa’s current car of the year. It rides on Volvo’s scalable product architecture (SPA), an adaptable basis for building other chic cars. This big sedan is the next step, while overseas there’s also an estate (V90) available.

The family resemblance is uncanny; and most certainly in a good way. S90 has inherited the chiseled good looks, sharp lines and crisp details of its XC sibling. Highlights include the trademark “Thor’s Hammer” LED headlights, chunky chrome skirts, concave vertical radiator grill and multi-faceted rear end. Volvo talks of svelte and muscular looks; I agree.

Inside it’s all spacious luxury and Scandinavian design with fine materials. This sedan differentiates itself with details such as diamond-cut air vent knobs and the “Aluminium Spine”, a flowing ribbon of silver which elegantly envelopes most of the dashboard. Everything feels premium and durable.

To give your S90 that special touch, interior options include various leather hues, paneling textures and delicious optional extras. My personal highlight – and a strong recommendation – is the full B&W (Bowers & Wilkins) surround sound system with nineteen speakers. And yes, some of them have yellow cones.

Like in the XC90, clean simplicity is taken care of by “Sensus Connect”, an ipad-like central touch screen which controls the climate, quite a few driving utilities and every imaginable infotainment option in the S90. The instrumentation is also fully digital and Volvo alleges that this car feels fresh and modern inside. Again, I have to agree.

Of course the S90 takes care of all its occupants but takes its top-scoring City Safety even further with intelligent driver aids like blind spot and cross traffic alert; or cyclist, pedestrian and animal detection. Some models even feature active lane assist, adaptive cruise control and the ultimate combination thereof – semi- autonomous driving.

You may choose between Momentum, Inscription or R-Design trim with a D5 turbo-diesel or T6 turbo- and super-charged petrol engine driving all four wheels through an eight-speed automatic gearbox. Power outputs are 173kW (D5) and 235kW (T6) with lesser front-wheel-drive derivatives following later in 2017.

The T8 Twin Engine model arrives at a later date.

Although I’m still perturbed by Volvo’s “Drive-E” four-cylinder-only engine policy – especially in such a big car – it didn’t take me long to dismiss any doubts. I drove the T6 petrol and D5 diesel on the S90 launch and not once did their power delivery disappoint. In fact, the D5 actually uses compressed air to fight turbo lag…

There are many, many fascinating details and some amazing technology at work in the new Volvo S90 but I’ll spare you the lectures and leave them up to your nearest dealer. What I need to tell you is how superb it feels to drive; from the cossetting air suspension (optional), good steering, excellent torque and sublime handling.

You may find this hard to believe but this medium executive saloon is competitively priced from N$675,200 to N$871,900 with only a few optional extras which don’t cost the earth. Which brings me neatly to the final track of my broken record: all modern Volvos are stylish, great to drive and represent exceptional value.