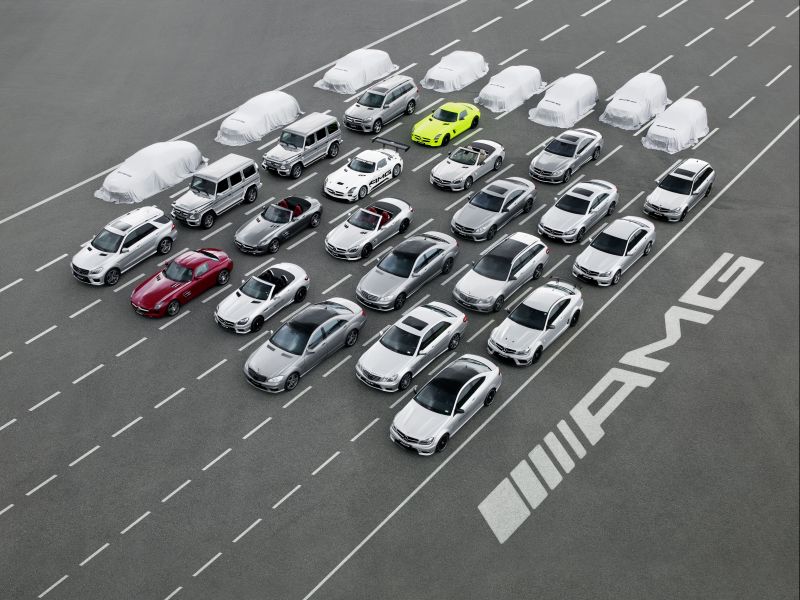 A recent purchase by one of our staff members has spurred us on to finally delve into the history of certain performance cars. But don’t worry – we shall use this opportunity to cover other brands, genres and eras as well. In fact, why don’t you drop us a line and tell us which car’s history you’d like to see?

So you enjoy spirited driving, thunderous performance but also have family and business obligations. What you want – nay, what you need – is a Mercedes-AMG C-Class. And when you enjoy the thrills of such a pure-bred machine, rest assured that it comes with a proper ancestry.

To define this list, we’re only sticking with anything Mercedes-Benz called a “C-Class”. That means every model from the first series W202 (starting in 1993) to the most recent W205 (from 2014).

The “W20x” terms are internal Mercedes-Benz codes for individual vehicle ranges. Pre- or Facelift means before or after the mid-life refresh (update) of each range.

Based on the then-new “C-Class” Mercedes-Benz, this was the first official collaboration with AMG – a tuning company which had been independent until the early nineties when Mercedes bought a majority share with the view of making AMG vehicles the sporty alternatives of their regular cars.

Although never officially imported to South Africa, a few examples have made their way to our shores and are thankfully in the hands of collectors and aficionados. With a claim of being the first “official” AMG car ever built by Mercedes-Benz and AMG, the C36 should become a solid collector’s item.

Fun fact: the launch colour of the C36 AMG was a pale yellow, sometimes seen on local C180 or other “Classic” trimmed W202 C-Classes.

For the mid-term range refresh of the first C-Class, AMG traded the straight six engine for the then-new Mercedes-Benz M113 4.3-litre petrol V8. A few modifications hiked power from 205 to 225kW with torque going from 400 to 410Nm. The five-speed auto’box was also worked on but remained the only choice.

Trading the C36 six-pot urgency for torquey V8 grunt, AMG also stumbled upon a new groove and adoring customer base – most cars featured a growling V8 and were built at the tuning branch headquarters in Affalterbach from this point onwards. The C43 AMG was also available as an estate.

Fun facts: the M113 engine went on to 5.0, 5.5 liters and 5.5 Kompressor (supercharged) configuration. It also powered the McLaren SLR, albeit in heavily modified form. AMG built just a handful of W202 C55 AMG’s.

The new millennium brought a successful attempt at rekindling six-cylinder AMG power in the C-Class, while using V8 engines for bigger Mercedes’ like the E, M or S-Class. The C32 AMG used the M112 3.2-litre V6 (160kW) but more AMG tinkering and a supercharger boosted power by a whopping 100kW!

The C32 sedan gets the distinction of being the first AMG commercially available in South Africa and its meaty V6 Kompressor brought sales success, not just here. More powerful than its chief rivals, this Mercedes was catching up in terms of dynamics and took kindly to tuning. Also available as an estate.

Fun facts: the M112 V6 engine is closely related to the M113 V8 mentioned above – both having three valves and two spark plugs per cylinder. The “32” engine was also used in the first-generation SLK roadster and Chrysler Crossfire.

Did someone say M113 V8? When it was time to update the W203 C-Class, AMG reverted back to its most popular engine at the time. Now up to 5.5 liters (and 270kW), this motor also did duty in the CLK, ML, SLK and early S-Classes. Gears were still changed automatically but the W203 offered shift paddles on the steering wheel.

With plenty of torque and V8 thunder, luxurious trimmings and a smooth ride, the C55 was a textbook performance saloon. Its W203 chassis had become even more dynamic and featured further AMG enhancements. As before, the C55 AMG was also available as an estate.

Fun fact: To fit the V8 engine into the W203, AMG used the hood, front fenders and headlights from the CLK.

There were many reasons why the W204 C63 AMG was much loved and highly respected. Most notable was its large bore, short stroke, high-revving V8 which easily matched its direct competitors for power. The ride, steering and handling of the W204 C-Class also pushed driving dynamics to new heights.

Besides its ridiculously enormous and fantastically growly engine, the C63 AMG also gets the distinction of making it through its series’ mid-term facelift with the same motor. Unlike AMG C-Classes before (or after) it, there was no AMG-tuned six cylinder for the W204. It was also the last naturally-aspirated AMG V8.

Instead of starting off with a six- and moving to an eight-cylinder later, AMG introduced two hot models of the W205 C-Class simultaneously. The C43 uses a tuned version of Mercedes’ 3-litre bi-turbo V6 petrol engine (code name M276) with maximum outputs of 270kW or 520Nm, driving all four wheels through a 9G-Tronic gearbox.

Less powerful than the current C63 AMG (see below), the C43 AMG 4MATIC makes a strong case for itself with an enticing six-cylinder growl, all-wheel-drive and proper AMG dynamics. Claimed average consumption is just 8L/100km while flat-out it can reach 100km/h in just 4.7 seconds with an electronically limited top speed of 250km/h.

Fun fact: the W205 range of AMG’s is available in sedan, coupé and cabriolet body styles.

The C43’s bigger brother is the even more exciting C63 AMG. It’s powered by a 4-litre bi-turbo V8 spitting out up to 350kW and 650Nm. Literally – this high-performance sedan spits and pops when provoked! For those wanting more, the C63 S AMG hikes outputs to 375kW and 700Nm. Claimed average consumption is 8.2L/100km.

Proving its muscular credentials, the C63 AMG achieves supercar-scaring performance like 0-100km/h in just 4.1 seconds and a governed top speed of 250km/h. The C63 S AMG shaves another tenth off the 100km/h sprint and both models drive their rear wheels through an AMG Speedshift MCT 7-speed sports transmission. 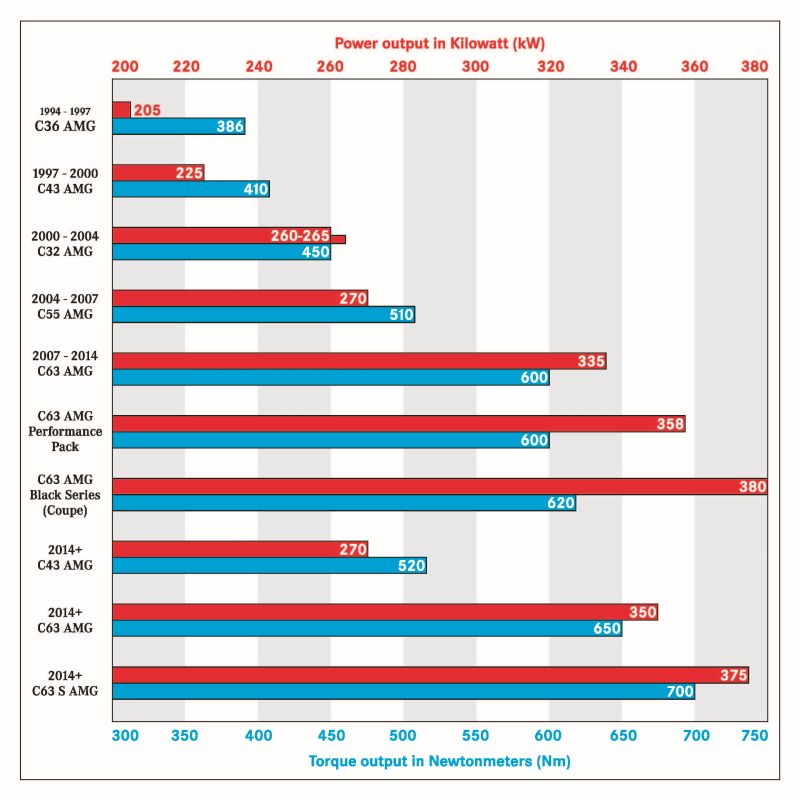 Which one was your favourite? Have we forgotten any models? What’s the square root of 144? Leave us a comment below. 🙂