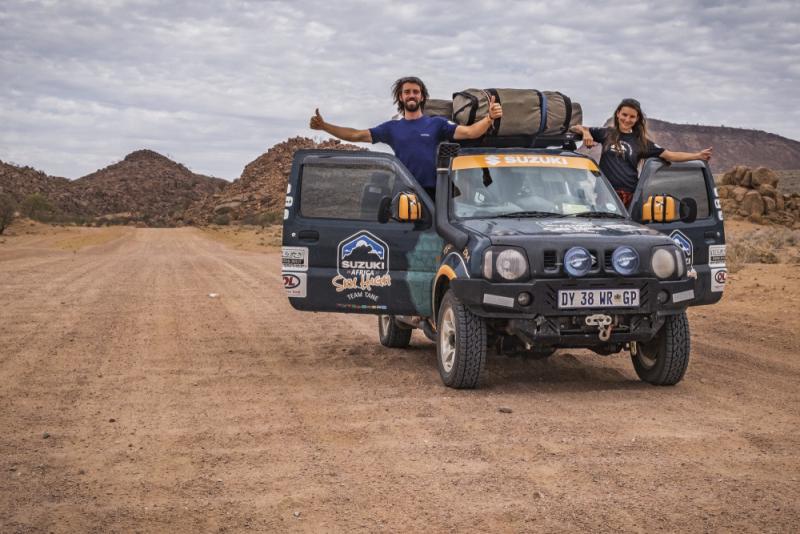 After many months travelling through Africa and over 19 000 overland-kilometres, Team Tane found themselves in the worst of rainstorms in none other than Namibia.

“Namibia surprised us with two major rainstorms in two weeks, after only seeing a little bit of rain three times in the past six months,” says Shane Quinnell, one half of the adventurous Team Tane couple who travelled across Africa this year in their 2011 Suzuki Jimny.

Not only did Team Tane find themselves knee deep in mud in their Jimny in the northern parts of Namibia, but the heavy storms nearly ended their six-month long adventure when lightning brought down a large tree right next to their tent during one of the storms.

Shane and his wife Tarryn have been documenting the environmental marvels, friendly faces and fascinating cultures of inhabitants of various African countries on their #SuzukiAfricaSkyHigh adventure as they travelled to Africa’s five highest mountains and back. The two of them scaled each of the five highest mountains, starting with Mt Baker in Uganda and ending with the mighty Kilimanjaro in Tanzania. Where possible, they took the most difficult route up, like the famed North Face of Mt Kenya which required two full days of technical climbing and a night in bivouacs high on the peak.

After a well-deserved break for the couple and their Jimny in Zanzibar and on the shores of Lake Malawi, the pair are heading back to South Africa through Zambia and Namibia. Their Jimny, which they christened Badger, has been slowing their progress as they are constantly stopped by fellow 4×4 enthusiasts and tour guides who cannot believe how capable the diminutive 4×4 is.

“We hoped to stop over in Angola before heading to Namibia, but the visa process proved very difficult. In Zambia, we stayed with the Ria family in Lusaka, who welcomed us back like family after our first stay when we were heading North. That’s but one of the amazing parts of an adventure like this, all the amazing people you meet and the hospitality they offer,” says Tarryn.

“The road from Livingstone to the Katima and ultimately to the border proved to be another tough test for the Jimny. The tar looked like scabs falling off an old wound and the border crossing into Namibia was a gruelling three-hour affair in the hot African sun.”

Namibia has been a treat for the touring couple. They visited the San and Himba tribes and documented much of their culture and practices on their website teamtane.com and on their Facebook and Instagram accounts. 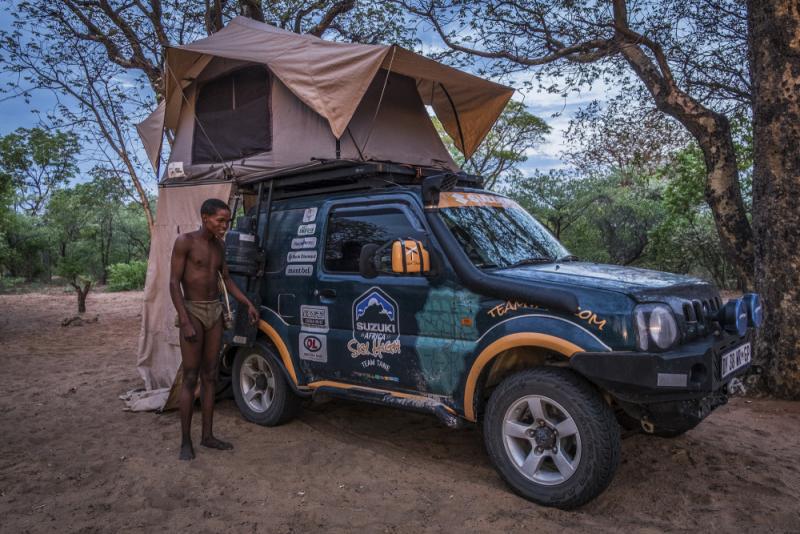 “The visits with both tribes served as a stark reminder of how closely we as humans are linked with nature,” says Shane. “The Himba tribe, for instance, recently had to relocate 250 km away from their homes due to a very severe drought.”

While Namibia’s drinkable tap water, good dirt and tar roads and friendly people are a pleasure, Team Tane and Badger have started missing home. They will slowly make their way back home and plan to cross back into Mzansi at the end of November.

“We are planning a presentation of our adventure and a question and answer session at Suzuki Bryanston on 1 December, which will be open to the public,” says Tarryn. Shortly before that, at City Rock in Johannesburg on 29 November, Team Tane will be present at the Mountain Club of South Africa (MCSA). More detail are available on their website and social channels.

Suzuki South Africa will also report on the adventure on www.twitter.com/Suzuki_ZA on Twitter and www.facebook.com/SuzukiAutoSA/ on Facebook.