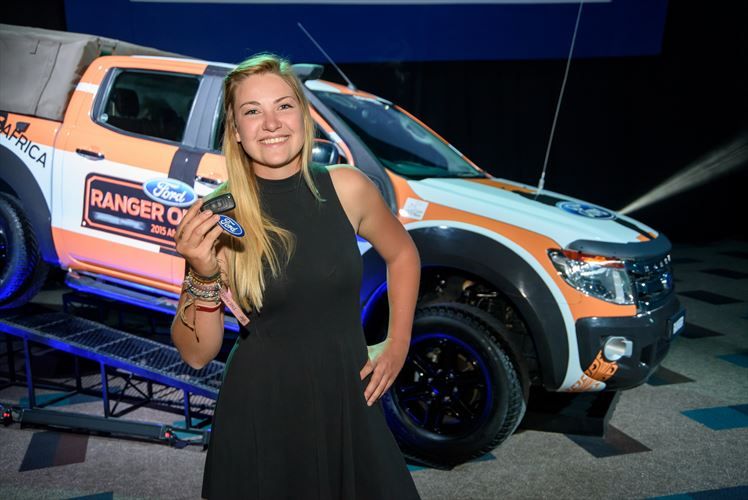 SANDTON, South Africa, 11 August 2015 – Pretoria resident Liane van Dyk has been announced as the winner of the 2015 Ranger Odyssey following 12 days of evaluation and competition while travelling 2 000km through the remote Damaraland and Kaokoland regions of Namibia. The announcement was made at the gala dinner for Ford’s Go Further event in Sandton tonight.

The 23-year-old computer programmer and part-time DJ beat 19 other contestants to the title, including 13 from South Africa, two each from Nigeria and Ivory Coast, and one each from Angola and Mozambique.

“We had a fantastic group of dynamic and very competitive contestants in this year’s Ranger Odyssey, and it was great to have five African countries represented this year,” says Tracey Delate, General Marketing Manager, Ford Motor Company of Sub-Saharan Africa.

“Liane was among the front-runners throughout the event, and showed consistently high scores in all of the aspects, from driving right through to the general knowledge tests. Her energy and enthusiasm also shone through, making her one of the clear favourites, and we are delighted to see her win the 2015 title,” Delate adds.

Along with being crowned the winner of Ranger Odyssey 2015, Van Dyk also wins an Odyssey-spec Ranger for a year, plus R5 000 fuel per month to continue exploring the rich culture and beauty of the African continent – all behind the wheel of the accomplished ‘Built Ford Tough’ Ranger which proved its outstanding capabilities in some of Africa’s most arduous terrain.

Van Dyk, who describes herself as an adventure junkie that’s built for the outdoors and off-roading, began her life-changing Ranger Odyssey adventure with Boot Camp in the small Karoo town of Prince Albert during June, where she emerged as one of the Top 20 contestants selected from the initial group of 40 chosen from the thousands of online entries received for this year’s event.

The 20 finalists jetted off from Johannesburg to Windhoek on 23 July to begin their amazing journey through some of the most challenging yet beautiful terrain Namibia has to offer. From the first sub-zero night in Spitzkoppe via Palmwag and Desolation Valley to the final stop at the base of Brandberg, Namibia’s highest mountain, the contestants experienced a wide variety of Namibia’s best destinations, most spectacular scenery and amazing 4×4 trails.

It was far from a leisurely tour, however, as each contestant was evaluated and scored daily on their convoy and off-road driving skills, camp etiquette, team work and communication skills, leadership qualities and adaptability.

There were also a series of special tasks and assessments on general knowledge related to Namibia and the African continent, celestial navigation, GPS navigation, as well as vehicle maintenance and recovery techniques.

In an interesting twist for this year’s event, there were two elimination rounds where the two lowest-scoring contestants left the group on day four, and another three departed on day eight.

During the 2015 Ranger Odyssey, contestants were given the opportunity to propose their own corporate social responsibility initiatives. Jacobus Muller (28) won the humanitarian project competition, along with the combined pot of “Ranger Odyssey Dollars” from the contestants to get his proposal off the ground.

He will be helping to develop a crèche that features a windmill system that delivers essential water and also provides power-generating capacity, thus enabling it to be energy efficient and self-sustaining.

In addition to the 20 contestants competing in Ranger Odyssey 2015, a group of nine journalists from a wide range of motoring and lifestyle publications also competed in the event during their four-day stints as part of a special media challenge.

Having also attended Boot Camp in June, they were evaluated and scored on the same basis as the contestants.

The highest scoring journalist was Gerrie van Eeden from Drive Out / Weg Ry magazine, and he wins the use of an Odyssey Ranger for a period of six months.