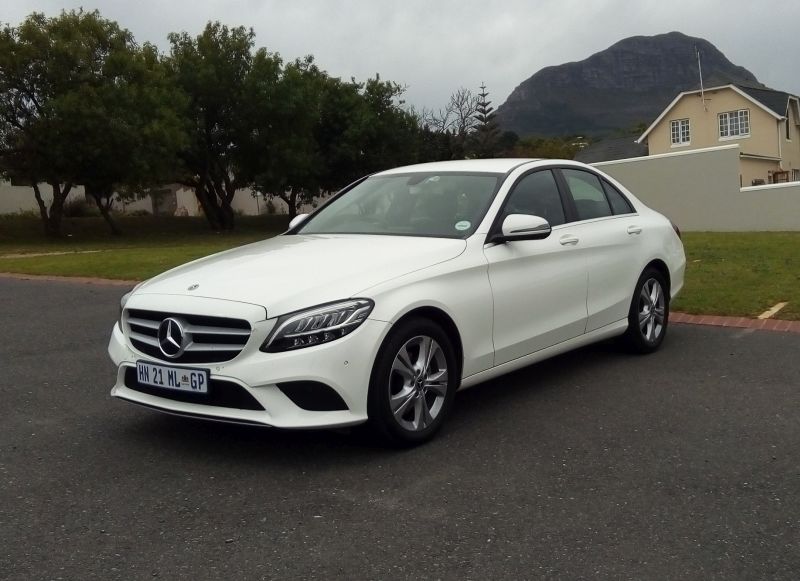 With the ruthlessly relentless onslaught of SUV’s, are the days of the luxury sedans finally numbered? We test a base model Mercedes-Benz C180 to find out.

You need to know: Don’t be gentle, it’s a rental. That phrase is forever intertwined with the fleets of entry-level C-Classes at the country’s airports while also aptly describing the base-specification of this white test vehicle. Usually, press cars don’t skimp on any optional extras, they’re covered with costly coatings and stuffed full of gadgets.

Not this one, though.

Despite my aversion to delivery bakkie white-on-black, I found the poverty trim on this car refreshingly honest. No fake AMG trinkets to blind us, none of those 50-inch gesture-controlled screens, six-way customisable dampers, dual-layer glass ceilings, or speakers so distinguished they have an ampersand in their name.

More info: Nope, this C180 had normal 17-inch alloys with decent 255/55 tyres, black speaker grills sans cursive writing, furniture covered in what looked like black leather, a completely solid roof, mostly analogue instruments, and its media screen was the smallest I’d ever come across in a Merc press car.

Ag sies tog, it probably has a nice character.

What else? That allowed me to test the car without too many distractions. And the first thing to strike me was that a basic C180 offers a well-composed array of features. Dual-zone climate control, LED headlights, cruise control, Bluetooth, seven airbags and a full raft of driver aids are all included in the price of R622,000.

Under the bonnet you’ll find a 1.6L turbo-petrol four-cylinder engine mated to a nine-speed automatic gearbox (with shift paddles) to send up to 115kW (156bhp) or 250Nm to the rear wheels. The resulting performance is acceptable, 0-100 takes about 8.5 seconds and there’s enough grunt for anything except very high speed manoeuvres.

Watch out for: Some features are half-powered, i.e. you need to spend extra to have them fully automated. These include the keyless start (but remote-controlled access) and front chairs. They’re only height-adjustable via electricity while the rest is done the old-fashioned, manual way. Most testers complained about a lack of bottom tilt adjustment.

Why you want one: The space, comfort, safety and refinement of a Mercedes married with modern features, stylish design and good fuel consumption. We averaged a respectable 7.5L/100km while the maker claims one less. The boot takes 480L, the car is just 4.7m long and the fuel tank can hold 66L.

If it were my money, I’d be OK with the OK-ish performance and spec of this base C-Class. I do think that metallic paint and beepy flashy parking sensors should have been included in the price but at least they give you a two-year warranty and five-year/100,000km maintenance plan.

Hopefully that’s enough to tempt the masses away from their SUV’s.