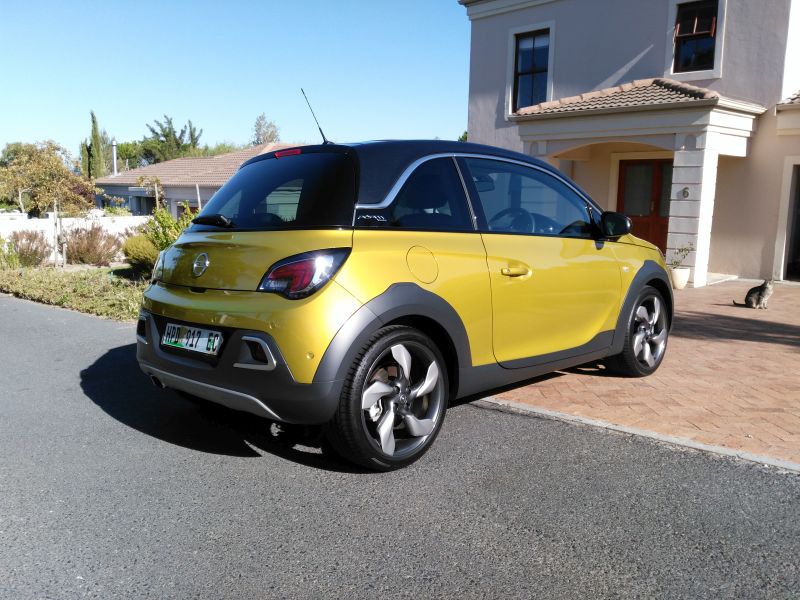 What you need to know: The Opel Adam is a modern, stylish and compact city car in the mould of Audi’s A1 and the desirable Mini. Arriving rather late to this party of trendy runabouts, Opel even named it after its founding father and gave it plenty of style and proper technology to stand a fighting chance.

Buyers in southern Africa don’t get as much choice as those overseas but local specs and prices are reasonable; and reasonably competitive. To offer you even more choice, Opel has launched some special models which include this limited-edition “Adam Rocks” and the freshest release, “Adam S”.

Some more facts: Adam Rocks is limited to 150 models in the S.A. sales region so you best be quick about buying one. We also hope that this Sprint Review helps buyers in the (currently booming) second hand market. Ace number one for this little rascal – their exclusivity means that you won’t see them everywhere.

Billed as a quasi-softroader, Rocks rocks up with beefier wheels and black plastic cladding around its extremities and wheel arches – much like you’d find on a Volvo Cross Country or Subaru XV. Ace number two? It retains the Adam’s incredibly diverse colour and trim palette which we suggest making full use of.

Where we drove: The airport, a few highways and byways, small town traffic and a busy city centre. It was in the last application where Adam Rocks pulled out a few more good cards with its easy controls, nippy performance and agile handling. One driver moved from a workhorse bakkie to this and almost crashed it.

Watch out for: Not much, actually. We believe that Opel’s 1-litre 3-cylinder turbo engine (85kW/170Nm) is proving to be durable and the gearbox on this test unit was also a pleasure to operate. If you’re buying one second-hand, best inspect its underside and suspension for signs of ill-placed off-road use.

Why you’ll want one: The easy drive and compact size of an Adam with a small injection of active lifestyle looks at N$287,100. Opel calls it “the smallest and coolest crossover”. Don’t buy this as a farm vehicle but consider it for irregular use on good dirt roads. Just keep in mind that it doesn’t have a spare wheel.