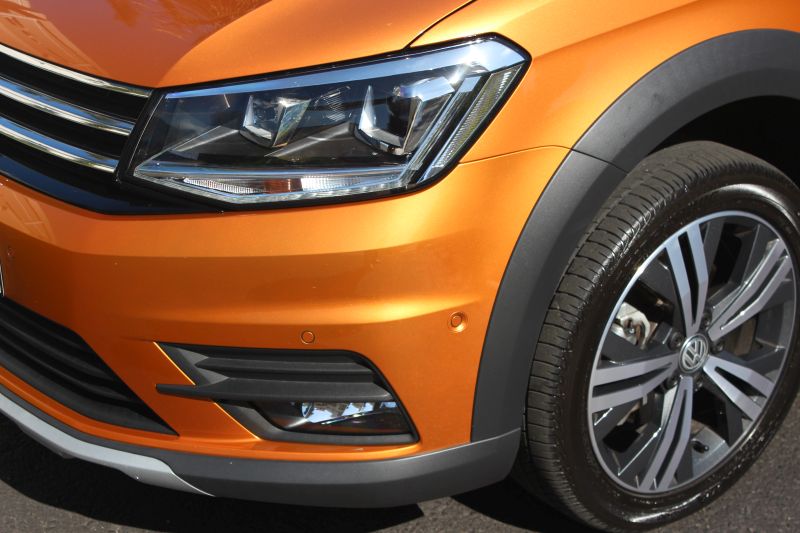 A new car, lots of information in short paragraphs

What you need to know: The Volkswagen Caddy is a small family van with big space and sensible features. It’s available in two lengths, two trim levels and with two Turbo-diesel engines and two gearboxes – or five combinations thereof. This “Alltrack” model is the cool, extra-urban, cross-over version.

Some more facts: Being a van, the Caddy has two sliding middle doors and hilarious head-room for everyone; with a big storage binnacle above the front seats. This could be used to store odd items and small pets, or as an anchoring point for lengthy items like surfboards, planks, javelins, harpoons or such like.

With the far rear bench in place, the two butterfly cargo doors reveal just 190L of cargo capacity. Yank out said bench and you’re looking at a more generous 750L in the five-seater configuration. We also discovered an unnerving echo in the cabin – something we didn’t pick up with our test of a regular Caddy Maxi.

Where we drove: All sorts of places, including some less-than-perfect roads where the bouncy rear suspension bottomed out quite quickly and gave this car a nervous disposition. On smooth tarmac, it’s fine though. Road and mechanical noise are noticeable but the Alltrack corners, cruises and brakes well.

Forward propulsion is provided by VW’s trusted 2-litre TDi, here with 81kW and 250Nm via five manual gears. For an extra N$32,200 over this model’s N$397,300 asking price, you get a more powerful (103kW and 320Nm) Alltrack with a smooth-shifting six-speed DSG automatic gearbox. Specifications are identical.

Watch out for: Besides its cabin acoustics and choppy rear end, not much. This weaker version of the engine requires a substantial amount of full throttle by modern standards but rewarded us with a weekly average of 7L/100km; barely a litre more than VW claims and a good indication of decent range from the 55L tank.

Why you’ll want one: Space, practicality, quality and economy. The Alltrack version lifts you above the flower delivery and bread van crowd without sacrificing any of the van’s virtues. Unfortunately we don’t get the 4Motion (AWD) version here, so this is a front-wheel-drive city slicker only.