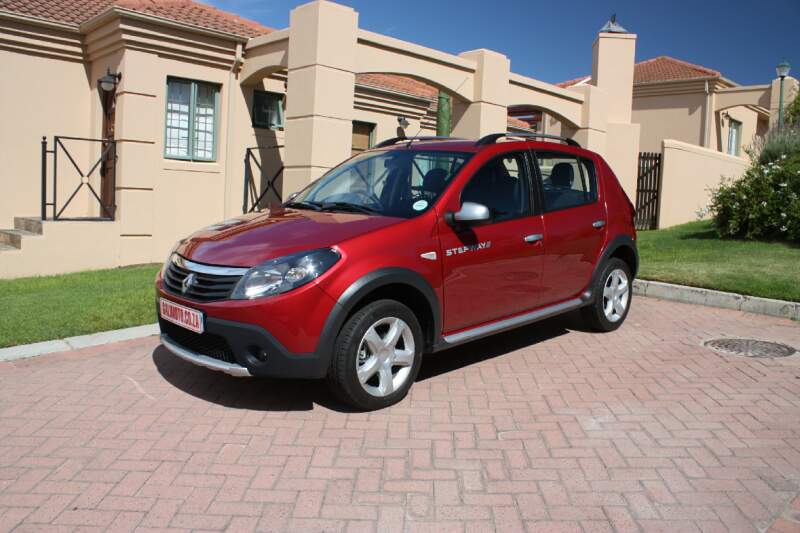 Something tells me the year is drawing to a close. The temperature has breached tolerable levels, the beach I frequent for irregular walks looks like the mall usually does on a Saturday and the jingle-laden mall itself looks like it’s about to burst at the seams.

Expecting to end the year on a road testing high note, I got all excited when we were promised delivery of our last car for 2010, “the brand-new Stepway”. Stepway what? Stepway Cayenne? Bugatti Stepway? An hour later, my hopes and dreams were instantly smashed.

Grinning at me with its plastic silver teeth was a Renault Sandero Stepway, probably the furthest you can get from Cayennes and Bugattis. However; despite my snobbish expectations, twenty ten’s last test car made a good first impression.

The standard Renault Sandero is nothing to write home (or elsewhere) about, a very affordable and unassuming hatchback for sensible motorists. The Stepway is its more adventurous and cheeky sibling which livens up the family photo like the CrossPolo does at a Volkswagen gathering.

And the more time I spent with it, the fonder I grew of the Crossdero, pardon, Stepway. It just looks so much better than its donor, more chunky and aggressive, perhaps even going so far as to invite the word “cool” into the mix. I think so.

Things look slightly bleaker on the inside where the Stepway will be knocked out by the Germans in the first minute of the first round. Stripy fabrics and a bit of silver plastic attempt to lift the budget cabin to hip ‘n trendy levels and I’m afraid that’s all it’ll ever be. An attempt.

The seats are comfy but not very supportive, the thin steering wheel hides good instruments with a basic digital display and all other switchgear is a no-nonsense, entry-level affair. A few creaking plastics are balanced by front electric windows, two airbags, power steering and air-con.

Both exterior mirrors are manually adjusted (although Renault’s website claims the opposite) and this model featured a single-DIN SONY front-loading radio/mp3/USB/CD unit. Which I loved. Not the radio itself, it’s probably a good apparatus but it will allow young dudes (and chicks) to replace it with something of their own preference.

The speakers sounded ok-ish (the indicator didn’t), but once again this bargain car will afford its new owners to happily retrofit it with flip-screen head units, six-by-nines and the like without destroying one-piece center consoles or expensive parcel trays in the process.

Tall drivers will have to severely adjust their seat to slot in behind the fixed steering wheel but the Stepway will carry five adults in relative comfort. Boot space extends from 320L to 1200L with the rear seats folded flat.

Propulsion is provided by a 1600cc 8-valve 4-cylinder petrol engine with 64kW (75hp) at 5500rpm. Working through a reasonably precise five-speed manual gearbox, it labours against a kerb weight of one ton to provide 0-100km/h in 12.5 seconds and a top speed of about 175km/h.

Previous owners of Golf II and Opel Kadett might well up when they drive the Stepway because its engine’s character and performance takes you back twenty years. It runs a little rougher than modern equivalents, leaps forward in the low to mid range and runs into a wall at about 4500rpm.

You can torture the old girl to just under 6000rpm but you’ll be wasting your time and fuel. Rather change up earlier and enjoy a claimed fuel consumption of 7.2L/100km. The Stepway isn’t very fast, cruises comfortably around town or on the highway, but usually struggles to gain momentum.

It compensates for its lack of speed by offering a forgiving suspension and predictable road-holding. As it lack ESP or traction control, the raised hatchback rewards over-eager cornering with under-steer, more under-steer or lift-off over-steer.

The steering is precise, all pedals are light and responsive, the turning radius is just 10.5 meters and the ABS / EBD-assisted brakes are excellent. What you have here then, is an entry-level car that’s slightly pimped out and good fun to drive; not exactly quick but quite fuel efficient.