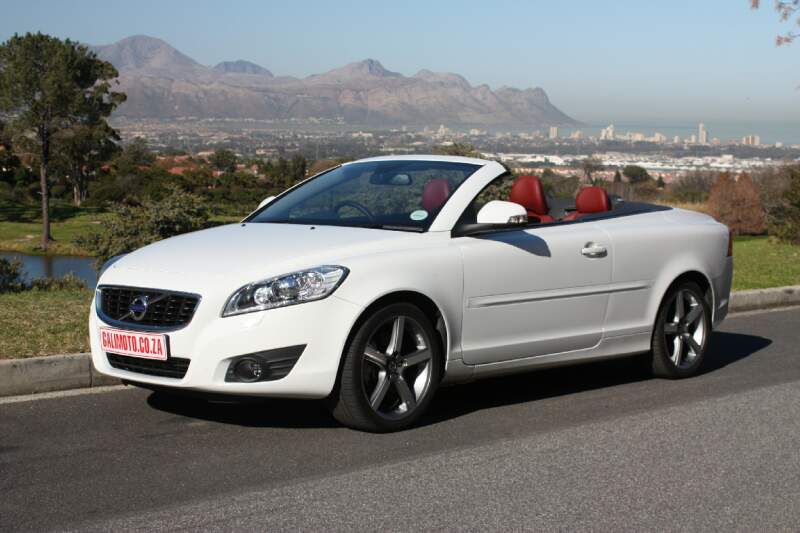 You should never meet your heroes. They might turn out to be rude, stupid or suffer from halitosis. In other words, quite disappointing. To be completely honest, the Volvo C70 T5 I tested recently was only mildly disappointing and is actually an offspring of my chosen hero, the plain but elegant C70 Coupe from the dawn of this century.

The new C70 retains some of the original’s sleek and elongated looks, spiced up with Volvo’s new protruding nose and trendy light clusters. Our test vehicle had even more stylish intentions with the combination of its white paint, sinister dark wheels and pepper-red leather interior.

Hiding in the stretched headlights are, among others, adaptive Xenon projectors whose sideways motion may even be switched on or off. The beautiful window line and sloping windscreens add to the car’s appeal, as does the impressively-sized and dual-personality boot lid.

I’m afraid that this is the point where that mild disappointment creeps into the equation. The C70 is just as elegant and long as its Coupe forefather but Volvo has given it a folding metal roof; a very large one.

The Nordic men managed to create a Transformers-like 3-section piece of art which invades most of the boot space. They’ve given it a clever button to raise the collapsed roof slightly, which won’t even grant access to a small suitcase. On top of that (excuse the pun) the roof can only be operated when the car is stationary… and takes a lazy 30 seconds to transform.

Not good enough, Volvo. The final nail in the perfectly-good-coupe-shaped coffin is that the C70 lacks a wind deflector or any discernable apparatus to keep turbulence out of the open cabin. It has seat heaters (optional), brilliant climate control, an amazing sound system, but no deflectors or screens to keep the wind at bay.

This means that you’ll inhale exhaust fumes and your own catalytic converter pong, sometimes chew on your passenger’s hair, while rubbing your dry, bloodshot eyes. I’ve driven and enjoyed plenty of cars with 11km of headroom, but this one is a complete waste of time.

Unless you put the roof back up and, ta-da, the boot will easily take two people’s luggage. Your eyes are good, your passenger isn’t green anymore, all hairstyles are restored to their former glory and the cabin actually smells of leather. Delightful.

The C70’s interior really is a place for connoisseurs. Leather and other materials are perfectly placed and finished, the instruments are clean and crisp, the back will accommodate adults for short trips, and that floating centre dashboard captures everyone’s interest.

The engine/gearbox combination is wonderfully smooth and brawny, thumping that off-beat 5-cylinder song when hurried and supposedly using an average of 9.4L/100km. We managed to use exactly 4 litres more on average; but thoroughly enjoyed it.

The C70 does exhibit tendencies of cabrio flex or roof-up groans but, no thanks to its fantastic Pirelli P-Zero tyres, has remarkable road holding and grip levels. The front-wheel-drive setup does invite traction control and torque steer, but never at an annoying level.

Our test vehicle’s optional 18-inch lookers teamed up with the sporty suspension to make the Volvo’s ride rather firm and uncompromising, which does ease up a little at highway speeds. The brakes are top class, the steering is nicely weighted and you’ll have to work darn hard to break the C70’s composure.

This vehicle is available in 9 colours with 4 rim, 4 trim and 5 interior colour choices starting at N$538 500; Volvo’s 5-year 100 000km Plan comes as standard. The C70 T5 offers an involving drive, plenty of kit, good looks and a magnificent interior. I just wish they’d left the roof on.