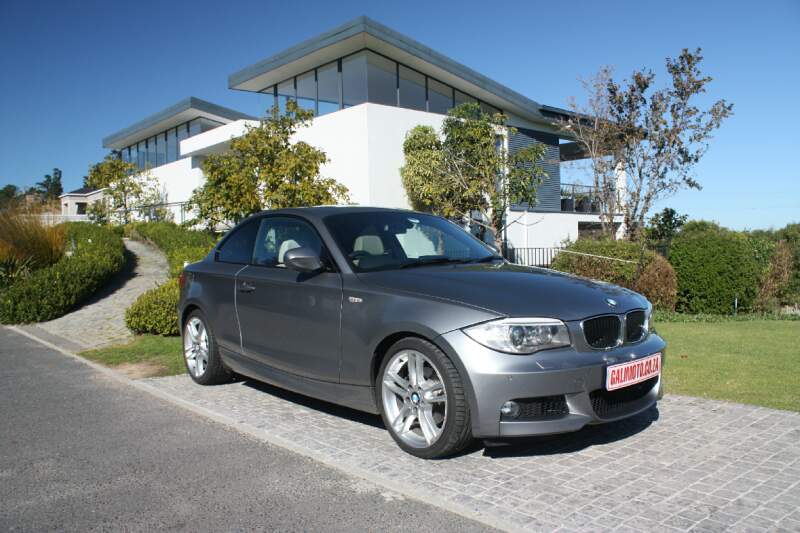 The BMW One Series was launched in 2004 as a further bid from the jolly Bavarians to fill yet another market gap: the luxury hatchback. We could probably argue about the definition of a luxury hatchback all day and all night, but I wasn’t the only one who disliked the 1-Series.

It was too cramped in most places, too sterile for most tastes, too ugly from most angles and too expensive to make any sense whatsoever. The advent of a coupe and convertible in 2007 strengthened the One’s appeal and sales figures even further, proving that BMW had once again hit the mark.

With the next generation already in the starting blocks, I was pleased to receive a sparkling grey metallic 125i Coupe Automatic press demonstrator. Puffed up by an M-pack plus big wheels, it took mere minutes for me to fall for its two-door charm and fizzing straight six.

I still don’t like the 5-door Ones or girly drop-tops, and this coupe falls somewhere in between. It’s got the hello-there eyes and nose but a tiny backside, pulled together by vertical flanks with undulating skirting boards. The big bumpers and wheels make it look cutesy-butch, if such a thing exists.

Crisp white LED strips and amber headlight halos announce your arrival from the front, while the stunning BMW tubular rear lights and LED number-plate lights mark your departure; accompanied by a sonorous six-cylinder rasp from the two chrome exhaust tips.

Inside, everything is standard BMW fare. Our test car featured a very tasteful two-tone black and cream combination which wasn’t everyone’s first choice. It is mine – I love multi-colour interiors, absolutely detest black-on-black and think Bee Emm always gets the colour, material and finish combination right.

Sunroof, electric seats, keyless entry, navigation, mp3/DVD, parking sensors, active steering, adaptive Xenon lights, Bluetooth and other goodies are optional extras – most of which were fitted to our test car. The car you’re reading about now will set you back an extra N$85,000 or so.

One option they could’ve done away with is the 6-speed Steptronic automatic gearbox. The extra N$18,800 are better spent elsewhere and unless you’re lazy and/or permanently in traffic jams, just buy the manual 125i Coupe.

Perhaps extended ownership will alter its shift pattern because in full auto mode, this gearbox was frustrating and erratic at best. Its operation is a little old school – even the beautiful shift paddles behind the wheel don’t necessarily speed up or smooth out its changes.

Unfortunately, our test car only managed seven seconds to 100km/h (and a few eights). It felt more like 125kW and a whining noise from the engine lead us to believe that our car wasn’t running 100%. Also, after a few performance runs, the gearbox went into complete psychopath mode and hunted every gear it could.

As for ride and handling, this One Series represents your entry into small, nimble, six-cylinder coupes. The M-pack disregards comfort with its extremely agile but twitchy and rock-hard ride, aggravated by the heavy and extremely direct steering. At higher speeds, the car does settle down and ride reasonably well.

The 125i absorbed a mountain pass with traditional BMW eagerness, despite its Achille’s gears, which just wanted to potter around town at minimal revs. I really, really wanted to like the snazzy grey two-door but its unpredictable drive-train and small fuel tank put an end to those emotions.

At N$390,739 I would shop around for better value (and more space) unless you simply can’t live without a straight six and that stubby silhouette in your garage. In which case, may I suggest ignoring most of the pricey options and the automatic gearbox.