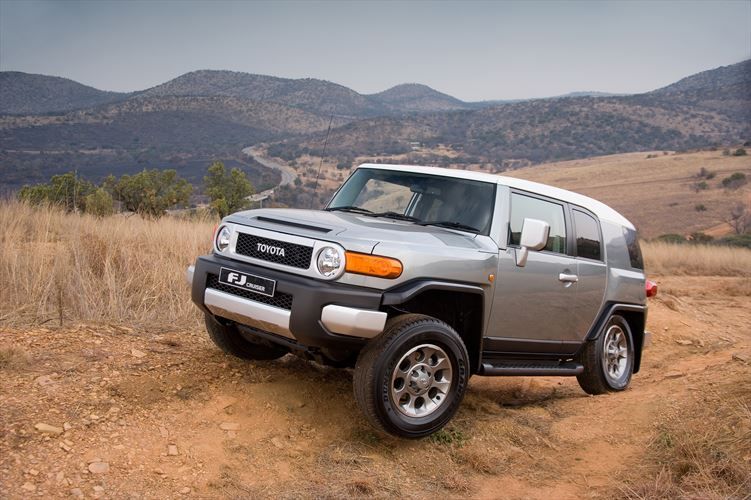 Retro is irrefutably trendy and whereas some may dismiss it as a passing fad, old school remains cool. Exhibit A through C in the automotive world would be the new Mini, Fiat 500 and Beetle. The not-so latest retro attempt is the cool FJ Cruiser made by, sharp intake of breath, Toyota.

It isn’t exactly new as this reminiscence of the original FJ40 series Land-Cruiser went on sale internationally in 2006; Toyota S.A. only just launch the FJ locally. The lineage is abundantly obvious, from the Toyota lettering across its blunt face to the mock silver bumper ends, funky wheels and white roof.

If opinions aren’t completely polarised yet, the rest of the car will make sure of that. Built on the same platform as the Prado and sharing its 4-litre V6 auto 4×4 drive-train, the modern FJ Cruiser is a 2+2 SUV or 5-seater 4×4 4-door coupé. With suicide doors and three windscreen wipers.

In order to retain some of oupa’s proportions, the windows are extremely upright and narrow, the side mirrors are enormous and the square wheel arches struggle to blend into the body. Sticky-out lights and a sticky-out spare wheel cover the back end which features a side-opening door for left-hand-drive traffic.

There’s plenty of cargo space and everything is trimmed in durable rubber and hard plastic, but a bit of carpeting wouldn’t have gone amiss. The passenger cabin is flat and wide, due to the car’s similar posture, and access to the back is granted by two Mazda RX8 suicide doors.

Seating positions are quite low, head and leg room at the back are acceptable for adults, while there is plenty of room up front. Driver and passenger slump into two soft but unsupportive fabric seats (leather costs N$8,600 extra) and can barely glimpse over a humungous plastic dashboard.

Most control surfaces are covered in hard plastics, cheap plastics or imitation leather. Knobs and switches are scattered about wildly, the instruments look childish, the multifunction steering wheel is only height adjustable, the centre tunnel is massive, so are the gear levers, and the radio is from 1999.

I guess what I’m trying to type is that the FJ Cruiser is in need of a revamp or facelift. Not on the outside – good luck freshening up a retro design – no, it needs better materials and new tech inside. The other gripe I had with my FJ Cruiser was its ridiculous to non-existent rear and rear ¾ visibility.

The vehicle featured a reversing camera in the rear view mirror but that, along with most of the four sun visors, is just out of reach and sight. And last but not least: the 4.0 V6 is brawny and smooth but its consumption and auto-box are a little outdated. Or retro, if you like.

Our test vehicle was the “Trail” specification and featured an optional roof rack with integrated spot lights (N$9,800). Pity they’re operated completely independently from the car’s lights, via a switch near the passenger’s knee. You also get a few stickers denoting it as the “Trail”, “Sport” or “Desert” editions.

Now for some good news. If you’re secretly lusting after an FJ Cruiser, I have unbelievably good news for you. It’s fantastic to drive. It’s got plenty of power, responsive controls, acceptable road holding and thee most unbelievably smooth ride. Honestly, it’s like an infinity sponge. It just soaks up everything.

Sometimes I would drive with two wheels next to the road for fun and it made no discernable difference to comfort levels. Speed bumps and traffic circles cry when they spot an FJ because it flattens them. Needless to say, it is also extremely comfortable in off-road conditions.

And capable – once you chuck it into 4×4 or fiddle with the diff-lock – as the rear wheels quickly hand over to the traction control with all that power. Drive it sensibly and the FJ will happily conquer the wilderness with its heavy duty suspension, 700mm wading depth, 34° approach and 31° departure angles.

I could go on about its VSC, BAS, warranty, service plan and side airbags but the fact is this: I expected this car to be a stupid gimmick for posers, but it isn’t. It’s stupid in some places but brilliant in others. And most brilliant of them all is that I believe it to be a desirable Toyota; something I’ve never experienced before.