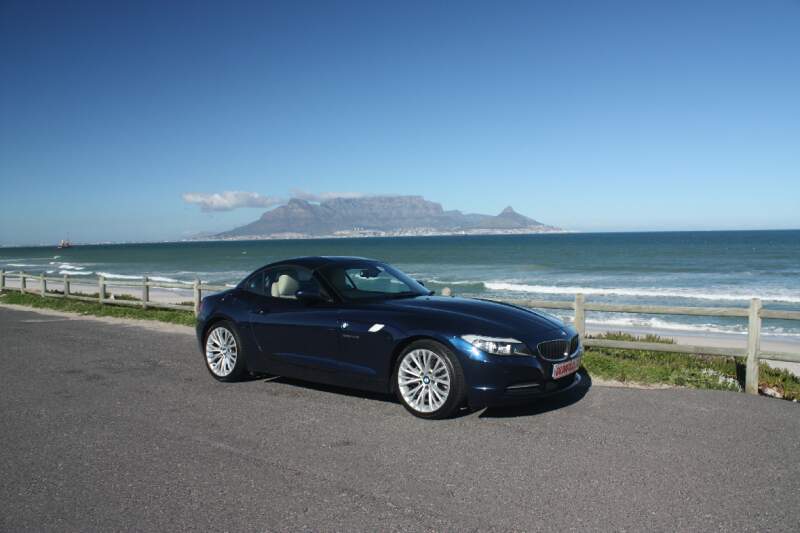 BMW’s have recently had a strong showing on these pages and there are a few simple reasons for this. Firstly, they’ve introduced a few fresh models and more importantly, the Bavarians have a new range of engines in most of their vehicles.

This week’s test car, a Z4 sDrive20i Automatic, is the fourth zed four I’ve tested and proved once again why this is one of my favourite cars. It’s a clever, fun-to-drive, two-seater coupe or convertible and I reckon it’s one of the best-looking cars on sale today.

With all three previous cars humming a lovely six cylinder melody, I was afraid that this four-pot would spoil the show, especially because I disliked its bigger brother in a different model. Let me reassure you that it hasn’t – yes, a straight six is more exciting but this entry-level model has a lot going for it.

The (optional) 3-way drive mode selector (Comfort, Sport, Sport+) adds more excitement to your motoring and there’s even better news… the engine makes darn good noises too. Give it a bit of welly and the turbo starts whistling and hissing while the exhausts occasionally pop between a lovely, dark growl.

This aural pleasure is heightened when you take down the clever metal roof and paw through the gearbox using the steering-mounted paddles. These used to be bi-directional on either side (which I liked) but BMW has now opted for the standard left down, right up arrangement, although the left one wasn’t always cooperative.

Average fuel consumption is pinned at 6.8L/100km but we usually averaged almost double that. I could slate the car for its thirst and relatively small fuel tank but the simple fact is this: You’re buying a pretty little turbo-petrol sports cars, don’t be such a scrooge. It’s going to chow fuel and you’ll enjoy every minute of it.

It’s also highly likely that you’ll enjoy the Z4’s unbelievably low and far back driving position, that massive bonnet stretching into eternity and its sharp steering feedback. The suspension focuses more on sporty handling but still leaves a measure of comfort for the Z4 to be a decent everyday commuter.

Hard cornering and vigorous driving will eventually see body roll, the front washing out or (with deactivated traction control) a slightly nervous rear end. With so many gears in the mix, it takes some doing to unsettle the little roadster but experienced drivers should find enough potential to keep them happy.

Other things you should know about a Z4 is that almost everyone will want to take a closer look. The roof can be operated under 10km/h but doesn’t leave much room in the small-ish boot. Yet again, that was to be expected. The cabin is tight, modern and beautifully finished with lots of toys to entertain you.

The sports seats (N$7,300) are comfortable and supportive but should have seat heaters as standard (yours for N$4,100). Also, more storage space and a cup holder or two would be nice. The sound system is great, the seat belts are hard to reach and there’s quite a bit of wind and mechanical noise with the roof up.

Roof-down excursions are very enjoyable thanks to a wind net between the headrests but anything over 100km/h becomes rather uncomfortable. So, for long distances you may want to keep its hat on – which will also make space for a dirty weekend’s luggage in the boot.

Any more questions? Oh yes, standard luxury and safety equipment is quite extensive but, as always, there’s an impressive list of optional extras to build your dream car. Our press demo was lugging around a whopping N$165,843 worth of toys, including park sensors which operate at up to 20km/h. Who parks at 20km/h?

Anyway. My personal choice would still be the (now discontinued) 3-litre straight six Z4 but this little turbo four represents a brilliant entry level model which should also please folks living at higher altitude. Its base price of N$506,500 includes a 2-year warranty and 5-year/100,000km motorplan.