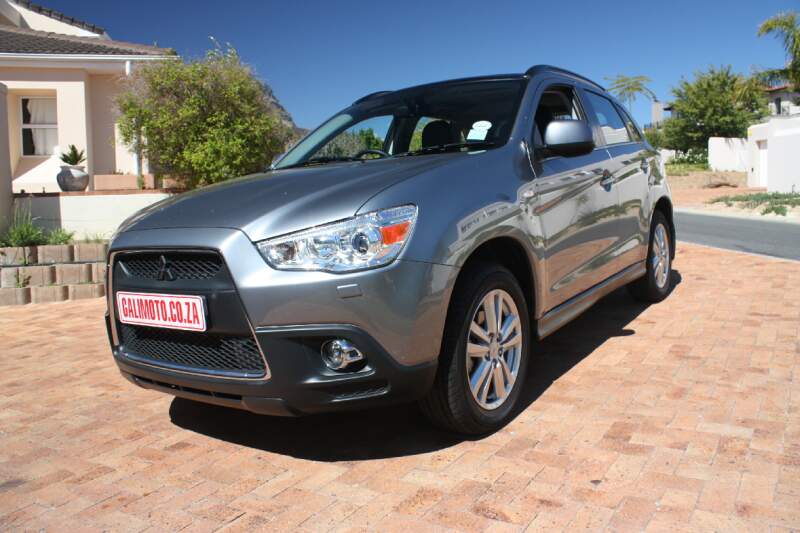 Vying for your attention this week is the Mitsubishi ASX, a crossover SUV that arrived fashionably late in the world of “Honey, let’s buy a 4×4 that isn’t a 4×4.” You or I could criticise and mock all we like but this niche of the market is alive and well.

And why argue over taste or lifestyle? Mitsubishi’s Outlander must’ve already shown its maker that young folks with disposable cash long for trendy SUV’s, even non-4×4 ones. Big brother Outlander crawls around on all fours so the new ASX was given a simple front-wheel-drive setup. No four-wheel-drive.

I don’t mind that idea at all. In fact, I welcome it over 4×4 SUV’s that don’t work off-road, cost extra money, use more fuel and oblige me to try out their feeble bundu-bashing capabilities. This means I’ll inevitably get stuck after a ridiculously short distance and have to be all nice about it.

Not with the ASX. It’s Mommy’s or Daddy’s commuter by day and their flash urban accessory by night. Come the weekend, a reasonable amount of kids, kites, dogs, bags, bats, boats, boots, boxes, bikes or other such stuff can be loaded in, on or behind the ASX for a bit of excitement and relaxation in the countryside.

Stay away from the dunes, beach, rocks or mud bogs and you’ll be fine. This crossover has on-road-biased 16- or 17-inch wheels and 195mm ground clearance to traverse the odd bit of rough stuff while looking for the next great escape or adrenaline fix.

Looks-wise, the ASX follows its manufacturer’s design identity and shows dimensions not dissimilar from a Nissan Qashqai or Toyota RAV-4. A few flowing bulges in its metal and a stubby tail set it apart from competitors and the bigger Outlander.

Inside, you’ll find plenty of Mitsubishi design elements and pleasing quality. There is a feeling of Japanese efficiency to the cabin, jazzed up with some silver highlights, crisp instruments and a clever trip computer. The exterior can be one of seven cool colours to blend in with your cool surroundings.

What now, “some” models? The ASX is only available as a 2-litre petrol in three variants. Two five-speed manuals offer differing spec levels (N$279,900 or N$299,900) and are topped by the CVT (continually variable transmission) automatic model for N$319,900.

Driving the ASX highlights its urban character with a commanding driving position over the large bonnet. The seats are very comfortable but could do with more downward adjustment, steering and pedals respond well and the 110kW/150hp/197Nm engine operates in a slightly coarse and rev-hungry manner.

To be fair, our test unit had just passed 1,000km and was probably waking up. It responded to higher revs better than low-down torque and the five-speed manual ‘box was slightly sticky. Still, the 1,998cc motor provided plenty of shove for relaxed city commuting and composed highway cruising.

A sixth gear might help high-speed consumption, we achieved roughly 10L/100km around town and approached Mitsubishi’s claimed 7.2 on the open road. The chassis provides stable and predictable handling but the rear end can bounce or bottom out quickly.

There isn’t much torque-steer but the absence of traction control in lesser models produces the odd mid-corner burnout; something that won’t creep into daily driving too much but could get worrying in wet, damp or slippery on- and off-road conditions.

The ASX may have a few shortcomings (including lack of Bluetooth) but I think Mitsubishi got the basic recipe right. It looks good, is competitively priced, offers decent value with its various specification levels and, just like the Outlander, is easy and relaxing to drive.